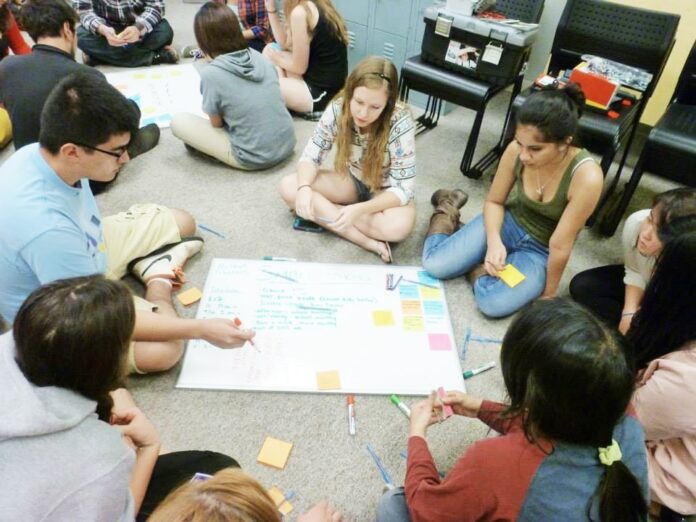 Thanks to the efforts of engineering and design students, UC Davis has become one of 17 universities nationwide to be part of Design for America (DFA).

DFA is an interdisciplinary network of student-led teams that use the design process to solve problems in their communities, with the help of faculty, mentors and sponsors. Founded in 2009 by Dr. Liz Gerber of Northwestern University, DFA has spread coast to coast and to other UCs like Berkeley and UCLA.

Following the national DFA design process, the organization advocates a three-step system: first understanding problems in their communities through interviews and research; then creating solutions and prototypes via collaboration, teamwork, and feedback from mentors; and finally implementing those solutions in trial-runs within the communities.

“The general mission is to have students and people from the community come together to solve problems using human-centered design,” said Max Bern, a fifth-year mechanical and aerospace engineering double major and co-founder of DFA-Davis. “Human-centered design is different than design from a business standpoint because you’re focused more on getting feedback from the specific user group during the entire design process instead of relying on how much money you’re going to get in a marketplace.”

In order to become a campus studio of DFA, universities must first go through a competitive three-phase application process. The process is orchestrated and judged by DFA alumni and fellows who work at Northwestern University, the national DFA hub.

Throughout the 2012-13 academic year, teams were required to compile signatures from the student body to determine campuswide interest in the organization. They then completed a four-week prototype development assignment to illustrate their teamwork and problem solving abilities, and lastly participated in a Skype interview to assess team leadership.

The team focused on bike safety at night by developing a prototype for motion sensored lights along bike lanes, using only flashlights, socks and cardboard boxes to simulate a moving visual indicator for bicyclists. DFA-Davis and three other campuses were officially selected in the spring of 2013 out of an estimated application pool of 60 universities.

DFA-Davis co-founder and 2013 mechanical engineering alumnus Ben Geva discovered DFA through a “serendipitous” encounter with Dr. Gerber while visiting the graduate programs at Northwestern University. He spearheaded student involvement at UC Davis in the summer of 2012. After talking to his major advisor at the time, Pr. James A. Schaaf, and the chair of the Design Department, Tim McNeil, the Engineering and Design Departments became sponsors for DFA-Davis and have even given the organization their own space in Cruess Hall.

According to Geva his DFA leadership role has exposed him to interdisciplinary skills he did not often encounter in the classroom.

“DFA is all about teaching the whole design process and not just one part,” Geva said. “[In engineering classes] when you’re told to design something you’re designing it around math … whereas in the real world there is more to it than math. Math is an important part of [the process] but there’s an enormous gap in education where they don’t teach us about what we’re going to design. Before you even get to the math there are thousands of questions that you need to have answers to.”

Starting as an official member in fall 2013, DFA-Davis has worked on projects concerning agriculture, food insecurity and disaster relief, which have already passed stage one: Understanding, and will soon enter the next stage: Creating Solutions.

Project teams have also introduced two new projects beginning this quarter concerning Alzheimer’s and transportation, each with their own project teams and leaders who have considerable autonomy under DFA’s administrative studio leaders.

Part of the DFA design process is to connect with community partners that are willing to spend time mentoring the teams, like organizations such as the Federal Emergency Management Agency (FEMA) and the Red Cross of Sacramento, which have partnered with the disaster relief project.

Another faculty member who has become very involved in DFA-Davis is Executive Assistant Dean for Administration and Finance of the College of Engineering Jeff Lefkoff, who sees the organization as an extension of the University’s purpose as an institution.

“It’s a great opportunity for students who are interested in working on societal problems and having a positive impact through innovative mechanisms and solutions,” Lefkoff said. “UC Davis has a public service mission in addition to our teaching and research mission, so it is very important we create these opportunities for our students, faculty and staff to contribute to this larger community we are a part of.”

Projects are scheduled to show results this coming Spring Quarter, however Bern has stated that there are still negative aspects of the design process.

“A large problem for other studios and [DFA] as a whole is that sometimes the projects don’t work out, they’re hard to implement, they cost too much, people don’t use them and despite their best efforts they fail,” Bern said.

This is why the studio leaders of DFA-Davis hope to expand their size to allow for more projects and designs, and a larger, diverse group of students.

Nevertheless, according to Sydney Patterson, a second-year design major and co-founder of DFA-Davis, size is not important.

“We really just want to impact the lives of people for the better. If we can design new processes or products that can help people through their daily lives in some way, then we have succeeded,” Patterson said.