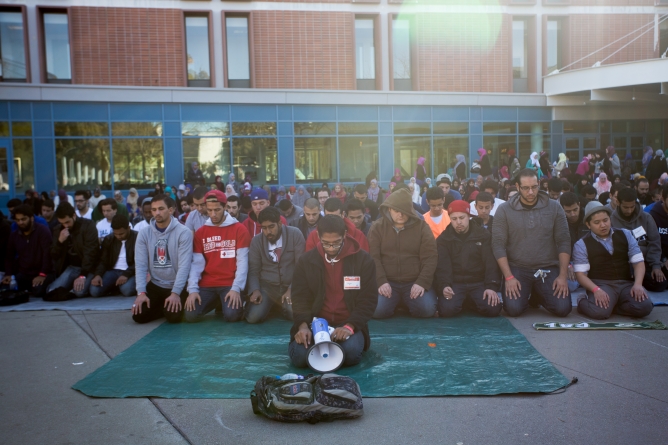 Over 1,000 people from all parts of the West Coast joined the UC Davis Muslim Student Association (MSA) on campus from Jan. 17 to 19 for the 16th annual MSA West Conference.

“First of all, I think this conference provides a very safe environment for students to have a dialogue about important issues,” Katehi said. “Sometimes the issues are very difficult to discuss, but I believe these are the right ways and right environments where difficult discussions can take place and where people, through respect for each other, can develop trust for each other and can have safe dialogues that eventually can lead into some important solutions.”

The MSA on campus was founded by students in the 1970s, but was officially recognized by ASUCD in the ’90s.

“Our main goal is to have a safe haven for Muslim students on campus, and for community members to learn about Islam,” said third-year community and regional development major and MSA president Maheen Ahmed. “We want students to understand our religion, culture and our ethnicities to promote interfaith dialogue and intercultural understanding.”

MSA West, an umbrella organization managing 31 individual MSAs from universities across the west coast, helped manage the conference in conjunction with the UC Davis organization.

“With this conference, we are able to have more students learn about the Muslim Student Association and create greater awareness for Muslim students on campus,” Ahmed said. “Even though it is an MSA event, the fact that it is held here makes it open to all UC Davis students.”

Although the conference is held at a different university each year, this is the third year the Davis community has hosted. The University held the event in 2002 and 2009 as well.

“I think it’s great for UC Davis to be able to host this conference, I know it’s important for our students in the MSA, but also for students who are in similar organizations at the other campuses,” Katehi said. “To have the opportunity to bring students together from across the 10 campuses is a big thing, because the students can learn from each other, they can get engaged in important dialogues, and I think that is a wonderful thing to have on our campus.”

Ahmed and other members of the MSA worked with University officials, like Vice Chancellor Adela de la Torre, for the past few months to prepare the campus for an influx of visitors. De la Torre also provided opening remarks at the start of the conference.

“I want people to know that administration supports us,” said second-year political science major and conference logistics head Azka Fayyaz. “They don’t identify themselves as Muslims, but they are still coming and are very open to learning about the experience of Muslim students and Islam itself.”

With workshops and panels running from the night of Jan. 17 to the afternoon of Jan. 19, the conference featured close to 50 guest speakers from across the country, neighboring areas and local community to discuss topics related to spirituality, current events and Islamic culture.

“At the end of the day, we are all just people. There are so many similarities between us, but we tend to take only a few things and make boundaries within each other,” said fourth-year international relations major and conference chair Aisha Hameed. “The MSA is a place to start breaking those boundaries, show people what being Muslim is about and make them realize that we are all very similar.”

This year’s conference theme was ‘Islamic State of Mind,’ focusing on the American-Muslim identity of many college students.

“Everything we do should tie back into our identity. Our identity is Islam, our religion,” said fourth-year political science major at UCLA and MSA West president Haidar Anwar. “Students in my generation sometimes tend to forget, so this conference will help them bring everything back and realize that it all comes back to an Islamic state of mind, and in order to move forward, that should always be the state of mind they should be in.”

All student panels, large workshops and smaller sessions were focused on discussing different angles of this universal theme, specifically in what being a Muslim means, and how American Muslims can be discriminated against in a post 9/11 society.

“It’s all about spirituality and balancing your time for religion, making religion a way of life and molding your schedule to fit your religious priorities,” Ahmed said. “Learning about your identity as a Muslim and other problems like racism in our community at large, so not just within the Muslim community.”

Since most attendees came from around California, Ahmed said most of the discussions were designed to be pertinent to students at large public schools.

“Our main message is legacy. As a human being, what kind of legacy do you want to leave behind, and how are you going to carry yourself on a daily basis and change your own habits to get you there?” Hameed said. “This is something that is beyond religion or nationality. The core message is one of individual human beings, it’s universal.”

In addition to the theme of the conference, the MSA West hopes to extend their influence onto local governments. This year, the conference advocacy campaign was to stop the use of drones in American warfare.

“All of our attendees will be writing personalized letters, and the MSA representatives from each school will be mailing those letters out to their local government officials,” Anwar said. “I feel like it’s definitely going to be moving, since there will be over 1,000 letters.”

By the end, all conference planners hoped the conference bridged differences between cultures within the Muslim community, as well as the surrounding campus population.

“I think all student groups of different religions, culture and ethnicities are very important to the campus because they bring diversity,” Hameed said. “At the end, it’s not ‘one is right and one is wrong.’ It’s just a different way of life. A more accepting community is a more peaceful community.”