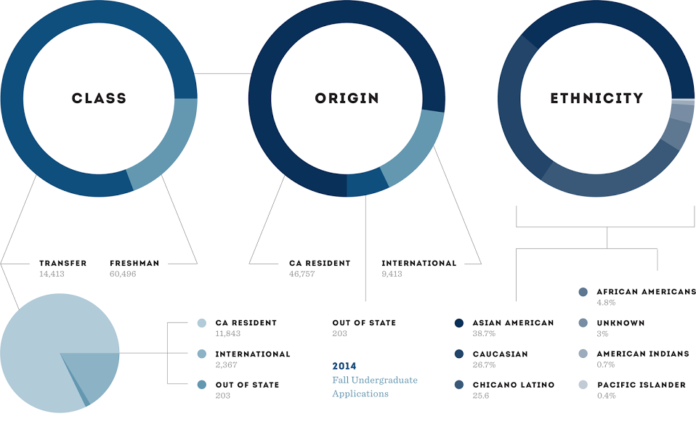 According to Walter Robinson, executive director of UC Davis Undergraduate Admissions, the increase is because of a strategic recruitment plan created when Robinson started at UC Davis in September 2011.

“We’ve been very intentional with our recruitment efforts,” Robinson said. “We have identified places where we should go and activities we should engage in in our outreach and recruitment. And it’s starting to pay off.”

For transfers, there were 11,843 California resident applicants, 203 out-of-state applicants and 2,367 international applicants.

“I think it is great that UC Davis is becoming more well-known among international students,” said Moira Delgada, UC Davis outreach coordinator. “I would have loved to have international friends as both an undergraduate and graduate. International students can play the role of global educators, especially to students, staff and faculty who have not had the chance to live or study abroad.”

However, Delgado worries that students will misinterpret the increase in international and out-of-state applications as favoritism towards students from these regions. According to Delgado, UC Davis is committed to maintaining the current allotment of California residents.

“My fear is that the general public reading these statistics will wrongly assume, as some did last year, that international students are taking spots away from domestic students,” Delgado said. “The general public sometimes doesn’t realize … that the tuition from out-of-state and international students is helping UC schools to overcome the loss in funding at the state level.”

According to Robinson, the large increase in out-of-state and international students has been a result of recent efforts by UC Davis to reach out to students globally and across the country. He said that the UC has been “very California-centric” since its creation in 1868.

According to Robinson, UC Davis has spent a large amount of effort and time recruiting students from schools in Chicano/Latino communities.

For Fall Quarter 2014, of the freshman applicants from California, 41.1 percent will be first-generation college students, 36.7 percent came from low-income families and 20.7 percent came from high schools with a low Academic Performance Index (API) determined by an API score of one to four.

With its recent opening in September 2013, Robinson does not believe the UC Davis Welcome Center has had enough time to have a large impact on this year’s applications. However, Robinson predicts that, in time, UC Davis will be able to correlate applicant outcomes to the Welcome Center’s efforts.

Due to an increase in applications, Robinson anticipates UC Davis’ admit rate will continue to fall.

“I went here because it was higher ranking than the other schools I got into, so competitiveness helps,” Nair said.

Across the UC system, there was a total of 183,272 students who applied to a UC for Fall Quarter 2014, an overall increase of 4.9 percent since Fall 2013. This would make 2014 the 10th consecutive year in which the UC saw an increase in applications.

“As a Chicana undergraduate student at UC Davis, it really fills me with joy to know that the Chicano/Latino students are the largest ethnic group among California freshman applicants, and even more that it’s the second consecutive year,” said Angela Munoz, co-chair of Hermanas Unidas de UC Davis. “I know that there still is a long way to go, but it’s a step towards having more students of color in the UC system.”

The overall number of transfer applicants to UC saw a slight dip from the previous year with a decrease of 0.5 percent.

Robinson expects the increase in applications to help with the movement of the 2020 Initiative. The 2020 Initiative is a proposal introduced by Chancellor Linda P.B. Katehi in November 2011 that seeks to sustain and expand excellence at UC Davis by expanding the overall enrollment to UC Davis with the addition of 5,000 students by the year 2020.

According to Robinson, UC Davis looks for the type of student who is well-rounded and has a passion towards making a contribution.

“I will proudly say as a Californian, I think it’s part of the California DNA that we are activists,”  Robinson said. “I was raised as an activist. There’s a value that should be placed on students who are activists.”

According to Robinson, UC Davis Undergraduate Admissions is still working on a final enrollment target, but he predicts the number to be comparable to the previous year. Due to the expected completion of the Tercero residence halls by Fall 2014, Robinson predicts a slightly larger enrollment target.