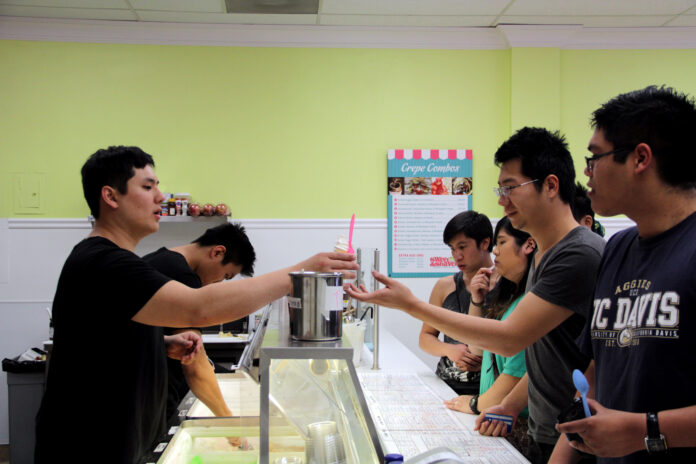 Sweet & Shavery, located at 210 E St., had its grand opening on March 8 from 11 a.m. to 10 p.m. The small store specializes in sweets, its menu consisting of Italian shaved ice, frozen custard and crepes.

Co-owners and UC Davis graduates Lindsay Phan and Brian Nuss, now a graduate student at UC Davis, believed the sweet treat that is more popular on the East Coast would do well in Davis.

“I think it is a little different since we cater to vegans and vegetarians because we have shaved ice … my favorite flavor is the cactus cooler parfait and the fruitier [desserts],” Phan said.

At the grand opening they offered free samples of the shaved-ice-parfait dessert and 50 percent off crepes to draw in new customers. Due to the unanticipated high demand, they had to close early on March 9 at 6 p.m. rather than the usual 10 p.m. and all day Monday.

“The biggest challenge for the shop has been knowing how much product to have every day because we’ve been running out. The frozen custard has been very popular … Another challenge has been that we only have three employees and they are all seniors so they will be graduating, but we have a lot of good, hardworking students,” Phan said.

“I see big things for Sweet & Shavery. I definitely think there’s a market for it here; I think the majority of the dessert places that I frequent involve semi-frozen things. And, there’s a ton of frozen yogurt places in Davis, so having another option for my frozen fix is kind of exciting,” Torres said.

Sam Bhatnagar, a second-year biochemistry and molecular biology major, thinks that Sweet & Shavery has a shot at success despite the disproportionate amount of dessert places downtown. He said, however, that he has heard different opinions regarding service.

“As far as the service, it was fine when I went but I’ve heard mixed reviews from people. Some of which include things like they randomly close early if they run out or they were rude or they just told people to leave because they were running out of stuff. They have a bright future ahead and I am stoked to get some more this week,” Bhatnagar said.

Phan said she thinks Sweet & Shavery is a great place for every kind of customer and that they want people to enjoy it.

“We try to appeal to students, kids and families. I want everyone to come … it’s bright and fun. I really like business, I like talking to people and I love desserts,” Phan said.

Bambu Desserts & Drinks, located on 213 E Street, opened in Davis this February. The franchised chain has replaced Zindagi Indian Bistro. It has 35 locations, including Sacramento, Rocklin, Bay Area, and even as far as Texas, Hawaii and Georgia to name a few.

“I liked it, but it’s kind of exotic, so it might not be for everyone,” Torres said.

Tako Korean BBQ, a chain of Korean-Mexican fusion restaurants with locations in Sacramento, opened on March 7. It is located at the corner of Fourth and G streets downtown and replaced the popular family-owned authentic Mexican restaurant El Mariachi.

The restaurant hopes to offer late night hours and live music, but for now they are just getting their foot in the door, said manager Alex Won. He previously worked at the Midtown location in Sacramento.

“UC Davis students are, I think, critical as far as food goes because there’s a lot of restaurants around here so they know what’s good or not — they’re good at critiquing. We’ve gotten a lot of good feedback. Students will have to try it for themselves and see if they like it,” Won said.

He thinks it will be challenging to get the ball rolling, but he’s excited for what’s to come.

“We are here to try to offer good food at a reasonable price,” Won said.