Celebrating a century of excellence 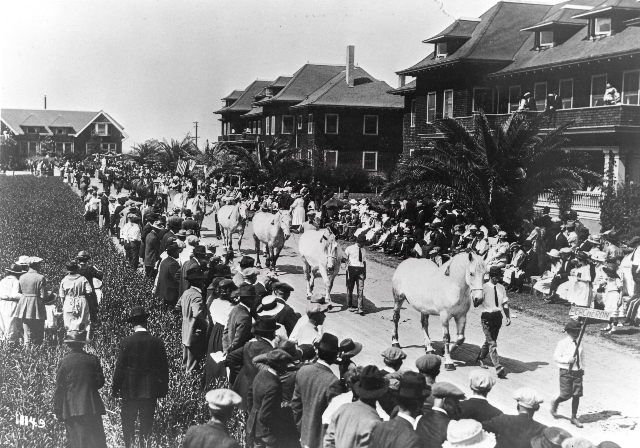 As the sun comes out and Spring Quarter rolls in at UC Davis, the excitement and anticipation for one of the most monumental student-run events in the nation heightens.

“It’s definitely a hallmark year, it is a testament to us as a student organization having come so far,” said second-year biological sciences major and Picnic Day Parade Director Grace Scott. “It’s a testament to UC Davis for how cohesive we are as a campus, how we are one of the world’s best universities and how the community celebrates with us.”

The theme of this year’s event  is 100: A Timeless Tradition, and the board plans to push this theme in every aspect.

“Just seeing the design come together is amazing,” said Publicity Assistant Director and second-year technocultural studies major Summer Kang. “Seeing that [the directors] can form an idea into a product and the fact that they are all students is great.”

Although most of the day will have activities similar to those in previous years, this year’s 100th Picnic Day will also commemorate the alumni that have worked to keep the event alive for so many years.

“In the parade this year, we are allowing our Picnic Day board alumni to walk along it just so we can show them how much we appreciate what they have done for Picnic Day in the past,” said fourth-year communication major and Chair of Picnic Day Jackie Kong. “Without all of their help, we wouldn’t be at the 100th and we wouldn’t be at such a spectacular place.”

Apart from alumni, current Picnic Day Board members have also been delving into the rich history of the event through reflection and thorough research.

“We’ve been going back catacombs of the parade and researching, and we’re hoping to highlight that aspect of Picnic Day,” Scott said. “In 1909, when Picnic Day started, it was just a bunch of people sitting around listening to speeches, and when the parade started it was just a couple of floats. But as Davis has grown, so has the parade.”

Scott compared this year’s 100th anniversary to that of Disneyland’s, making it clear that this year’s parade event is significant to the Picnic Day board and the Davis community alike.

“It is very community-oriented, so it’s going to include a lot of groups from the community and from UC Davis,” Scott said. “It really shows how UC Davis is integrated in our community.”

By incorporating history into the upcoming Picnic Day, those involved can reflect upon the growth of the event and the general UC Davis campus.

“For alumni who come back, it’s to revisit their experiences, to see how the campus has changed and how it has remained the same,” said Advisor to Picnic Day and Assistant Director at the Center for Student Involvement Paul Cody. “There’s people who have been coming to Picnic Day their whole lives. They grew up with UC Davis and Picnic Day being a part of that.”

In addition to alumni involvement in the parade, a history room will be set up on the second floor of the Memorial Union where alumni will have the opportunity meet with their past board members.

“This year we are taking more of a look back at where we’ve been, but I think that ever since Picnic Day’s inception, the idea has pretty much been the same,” said Vice Chair of Picnic Day and recent graduate Martin Guo. “It’s really just celebrating the campus and what it has to offer all of the people who come to it.”

In addition to activities highlighting the 100th year, many Picnic Day staple events will also be held, including the Doxie Derby and Chemistry Magic Show. Several UC Davis academic departments will also be open to visitors, showcasing the university’s efforts in education.

“Most of the events are the same,” Cody said. “ That’s one of the great things about Picnic Day, you can go to different events every year and still not see all of them.”

“It’s a way for people to come together on an annual basis,” Cody said. “It’s a catalyst to celebrate UC Davis.”

Bringing alumni, the Davis community and current students together serves as one of the main purposes of Picnic Day, and Cody expects there to be a lot more alumni on campus than usual for this year’s event.

“We have reached a milestone, and there will probably be more people because of that significance,” Cody said. “It’s a natural human thing to celebrate significant milestones, and 100 of anything is a pretty major accomplishment.”

As one of the largest student-run events in the United States, this year’s Picnic Day celebration is backed by the effort of 16 Directors, 60 Assistant Directors and close to 350 volunteers and staff members.

“It’s a student-run event and coordinated, but it needs the support of everyone on the campus and community to make it a successful event,” Cody said. “Everyone is contributing in some form or fashion, and that’s what a lot of people take pride in — to be a part of one of the most cherished events on campus that has happened 100 times.”

Ritika Iyer and Lujain Al-Saleh can be reached at features@theaggie.org.