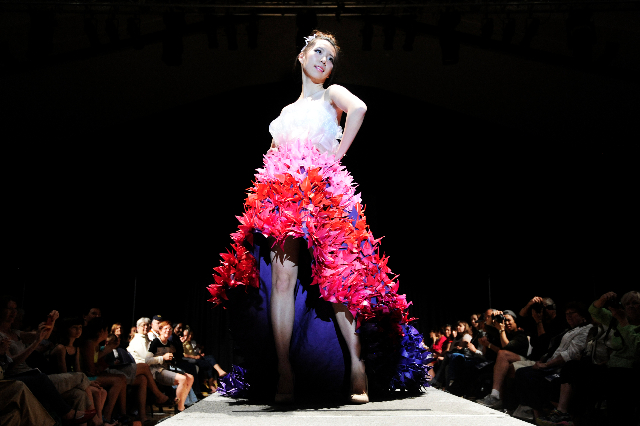 The UC Davis Fashion and Design Society (FADS) will be hosting their annual runway fashion show in Freeborn Hall on Picnic Day, April 12. This year’s show is called “Raw Edge” and will feature 16 new collections from advanced design students at UC Davis.

A small group of UC Davis design students spent the entire 2013-14 school year imagining, planning out and creating four to six new garments for the show as their senior projects. After taking a series of classes that taught them how to cut, sew and dye garments, the students were able to advance to the class known as “Signature Collection,” or Design 179, taught by design professor Susan Avila. There, the students spent 10 weeks drawing and putting together unique lines of garments based on a theme each designer chose.

Each designer cut, dyed and sewed their outfits by hand. The inspirations of the collections range from religious traditions to a modern twist on British aristocracy to the galaxy and beyond.

Fourth-year design major Nancy Pulciano said she’s looking forward to seeing her collection on the catwalk. She said that her line is inspired by urban streetwear fused with the ideas of silence and meditation.

“It’s all about urban streetwear for the show,” Pulciano said. “Many of my designs are androgynous or unisex, though each garment is completely different and unique from the others in its own way.”

Many of the designers in the show are basing their lines off their personal cultures, beliefs and experiences, but some students have chosen to take a more abstract route. Eve Wanetick, a fourth-year design major and publicity chair of FADS, has based her collection off of shadows.

“I was inspired by 1930s silhouettes and the concept of the use of dark shadows in that time frame,” Wanetick said.

Along with the “Raw Edge” advanced design showcase, the show will also feature The Single Garment Competition and The Dress Red for Heart Health Campaign.

The Single Garment Competition is a competition in which UC Davis undergraduate students from any major can enter a single outfit to be displayed and judged. The garments will be judged in two categories: individual expression and sustainability. The competition will be judged by professional designers Whitney Roe Thornburg, who is the head fashion designer at ISDA & Co., and Katherine Karnaky, who is a textile designer at Williams Sonoma/Pottery Barn. The competition is open to any student with an interest in fashion design to showcase their talents in the art of garment making.

Overall, though, the show is meant to show the hard work UC Davis design students have accomplished in the 2013-14 school year. Fourth-year design major Ryo Kasagi expressed that fashion design is a lot harder than it seems and that he is excited for non-design students to see the end product of the advanced design students’ work.

“I’m excited that the people who come get to see what we’ve made,” Kasagi said. “A lot of people don’t know a lot about the design program at UC Davis and this is a good way to publicize it. It’s good for students to see what the design major is like because it’s a lot harder than it seems. I’m excited to see how all our hard work pays off.”

The doors of Freeborn Hall will open at 1 p.m. and the show will start at 1:30 p.m. Tickets are $5 for general admission and $3 with a valid UC Davis student ID. You can purchase tickets online at the UC Davis ticket box office or at the door on the day of the event.

AKIRA OLIVIA KUMAMOTO can be reached at arts@theaggie.org.