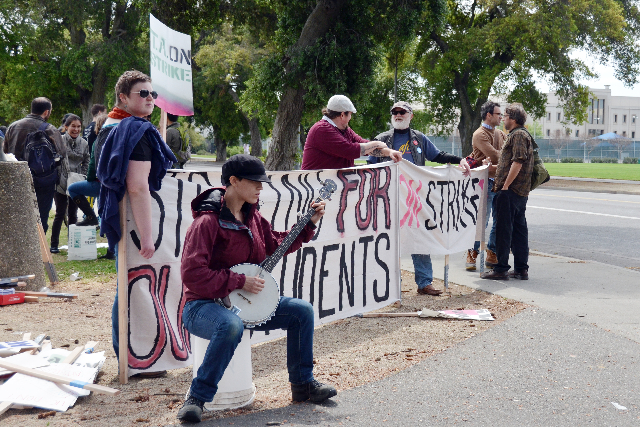 Members of the UC Student Workers Union (UAW 2865) struck statewide at University of California (UC) campuses on April 2 and April 3 to protest some of the system’s alleged unfair labor practices. Davis strikers took their protest to the corner of Russell Boulevard and Howard Way on April 3.

UAW 2865 represents student workers across the UC system, including teaching assistants (TAs), graduate student instructors, readers and graduate and undergraduate tutors. The union filed a series of Unfair Labor Practice charges against UC over the past year. Their complaints are largely centered on instances of UC’s alleged intimidation surrounding strikes.

Complaints range from the UC threatening to invalidate international students’ visa status for participating in union activity to unlawfully videotaping those participating in strikes at UC Berkeley and UC Santa Cruz and sending out emails claiming that legal strikes are illegal.

“The worst part is they sent an email to UCLA international students saying that if they struck they might be risking their visas,” said Duane Wright, TA in the Sociology Department at UC Davis and UAW 2865 Davis unit chair. “It’s disgusting that they would do that.”

UAW claims that these practices are part of a pattern of intimidation from UC.

According to a UAW press release, “On February 23, 2014, the Director of the Writing Program at UCSC told a group of union members in his employment: ‘If you strike, you will not work in this program again.’”

The UC declined to comment on any particular allegations of intimidation, but did offer its opinion regarding the strikes.

“The bottom line here is that if someone feels unfair labor practices have occurred, they need to resolve that with the Public Employee Relations Board, not at the picket line,” said Shelly Meron, a spokeswoman for the University of California Office of the President.

While the UAW and UC are still in the process of bargaining over the student worker contract, many strike participants noted that their decision to strike was due in large part to the UC’s perceived lack of respect for union members.

According to Wright, the other catalyst in the decision to strike was the UC’s refusal to bargain on key issues, such as class size.

“They still haven’t given us a proposal on class size,” Wright said. “They don’t even want to talk to us about it. We’re just saying they need to start bargaining.”

The issue of class size came up repeatedly throughout the day of the strike. The University is increasing class size to accommodate the growing number of students flowing into the UC system every year, but TAs claim this is negatively affecting students. They argue that grading has become increasingly mechanical and impersonal to meet the needs of larger classes at the cost of valuable face-to-face time.

“I TA’d for upper division labs in viticulture and enology,” said Anna Mantheakis, viticulture and enology graduate student and strike participant, in an email interview. “Many of my students had a really hard time writing full lab reports in V&E labs … At this point in their academic career, report writing should be second nature. The basic science courses are overloaded, with poor TA allocation to labs … What’s worse is, when assignments and tests in the basic classes are designed to be quick to grade, there’s less emphasis on critical thinking skills. Instead of short essays we get multiple choice, and instead of lab reports we get worksheets.”

TAs see the concrete ways in which these shortcuts affect students.

“Students make it through these classes with Bs, only to get Cs and Ds on their upper division lab reports,” Mantheakis said. “This is a rather rude surprise for students, and it’s extremely unfair to both students and TAs.”

The trend of increasing class sizes and decreasing attention in the classroom extends to all fields of study, according to other strikers.

“They say that class size doesn’t matter, but we see how it hurts students,” said Andrew Higgins, TA in the history department and strike participant.

Julie Setele, adjunct instructor and former UWA union member, brought her class out to the strike.

“I’m supporting them in solidarity,” Setele said. “We shouldn’t have to strike to get a new contract.” Setele plans on discussing the strike with students in class this week.

Some undergraduate students and community members also stood in solidarity with the strikers, as passing cars frequently honked to show their support for the cause.

“I think it is a moral imperative that students wake up and see what is happening around them,” said Melody Yee, a second-year undergraduate student and member of the Student Labor Organization. “When the University refuses to grant fair contracts to workers and intimidates them when they fight for one, they are really saying that we as workers, student-workers and students are expendable.”

“The vision of the regents is so far off from the needs of the school,” said Pat Cabell, TA in the Comparative Literature Department and a strike participant. “I feel like we are in dramatic need of change. I don’t want to have to keep coming out here every quarter.”