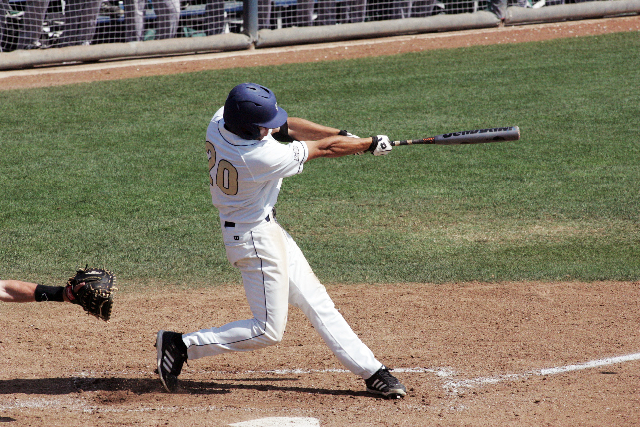 Sophomore Max Cordy (1-3, 6.39 ERA) got the start for the Aggies but struggled to find the strike zone as he gave up three hits and one walk in the first inning. The Hornets’ leadoff hitter, Nathan Lukes, was able to single off Cordy in only the third pitch, and Kyle Moses, singled through the left side of the infield. Cordy redeemed himself by striking out Rhys Hoskins with a fastball. Hoskins is the Hornet’s best hitter, averaging .363 this year. Cordy then walked Sacramento’s David Del Grande.

With the bases loaded, the Hornets’ left-handed hitter, Will Soto, made it to first base on a fielder’s choice, all the runners advanced and Nathan Lukes scored the first run for the Hornets. Later, Scotty Burcham singled down the right field, recording an RBI as Kyle Moses scored the second run.

The Aggies scored one run in the second inning as junior Evan Heptig singled down the left field line, bringing a runner home for the tie, 2-2 after two innings.

It was all downhill for the Aggies after that. UC Davis gave up eight runs in the third and fourth inning. The Aggies went through three different pitchers in the fourth inning. Corby was relieved by redshirt senior Robert Parucha after walking the Hornets’ Clay Cederquist. Parucha (5.49 ERA) was not any better, as he walked two batters and gave up a run. Redshirt junior Connor Detko took things over at the mound, but gave up five runs before Cederquist got caught stealing second.

As sophomore Spencer Henderson took the mound for the Aggies, the Hornets had a comfortable lead, and a three-run home run by Hoskins put the game away for Sacramento State. The Aggies’ redshirt freshman Brian Ruhm responded by blasting a grand slam off Sacramento’s right-handed pitcher Julian Barron to cut the Hornets’ lead.

However, Sacramento State was not done, as Will Soto slugged another home run in the bottom of the ninth inning to close out the game, 15-7.

Despite the defeat, Ruhm is confident that UC Davis will come back from this loss.

“The last couple of games we’ve been swinging the bat well. Our defense was a bit shaky today, but we just need to keep swinging it,” Ruhm said. “We’ll let pitching take care of themselves, they’ll come around. They’ve been pitching well for us all year.”

The Hornet’s Julian Barron earned the win, Corby is now 1-3 after six starts.

Up next for the Aggies is a three-game series at UC Riverside. This is the first game of a two-game series against Sacramento State. UC Davis travels to Sacramento to face the Hornets at Raley Field on May 13 to close out the Causeway Cup.