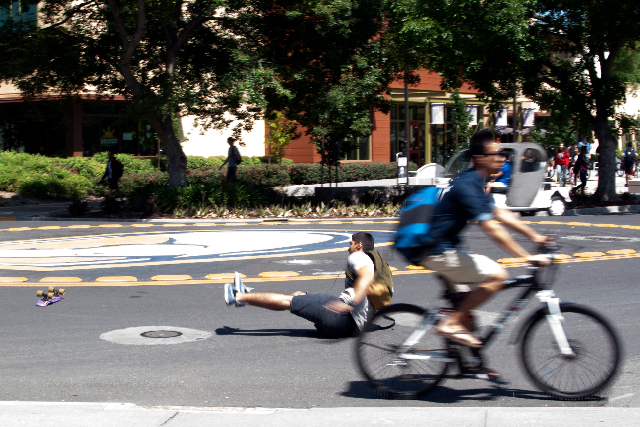 Last quarter, a bike collision left me in urgent care with staples in my head, a concussion and notes to give my professors to avoid penalization for missing class.

I was riding in what I thought was a conscientious manner, with one hand on the horn of the saddle for warmth and the other tapping my back brake, when another biker approached from behind, lost his balance on the slick pavement, and sideswiped me and my trusty metal steed.

Suddenly, I wasn’t heading to my physics class, I was on my way to close a head wound.

Recently named USA Today’s No. 1 biking town, and with 22 percent of residents commuting by bike, it’s safe to say that the people of Davis know a thing or two about cycling. But with the sheer amount of time that we students spend on bikes, the statistics are stacked against us — at some point in our time at Davis, we will probably see, be involved in or know someone in a bike accident.

“[We see many] mechanical failures, slips on pavement, bags hanging on handlebars which get into the spokes, resulting you going over the top, that kind of stuff,” said TAPS Bicycle Program Coordinator David Takemoto-Weerts. “There are a fair amount of bike on bike accidents in between classes, but both on campus and generally, most crashes are single bike crashes, some of which can be pretty serious.”

While most accidents can be prevented by proper bike upkeep, traffic-friendly infrastructure, correct signaling and courtesy toward others, some accidents truly come out of the blue.

While many crashes may result in no more than mild shock and apologies as parties involved get back onto their seats, a number of bicyclists are impacted in the long term by accidents — injuries sustained can last for months, and can even change a way a person bikes forever.

“About one year ago exactly, I was on my way to work going through [La Rue Road Tunnel], and I was riding no hands,” said Jack McGowan, a fourth-year biological sciences major. “As I was going up the hill, I started pedaling harder, and my bike chain fell off. I basically dumped over my handlebars, and hit nothing but my face.”

McGowan received immediate care thanks to a passerby who drove him to the Student Health and Wellness Center.

“I was bleeding all over. It looked like I was the victim of some kind of massacre. I fell really, really hard. I wouldn’t wish that on anybody. There are few more sobering experiences in life than literally scraping your face off on asphalt. It’s foul,” McGowan said.

The next morning, sensing that the gash in his face was deeper than originally diagnosed, McGowan had stitches put in.

As a result of the time he spent receiving medical care, he missed a quiz in his math class, changing the event from only injuring himself physically to also impacting his GPA.

“As soon as I got out of the Health Center, I went home and emailed my professor [to arrange for a makeup], but he wasn’t very understanding. I didn’t end up getting the grade in the class that I wanted, and I know it’s a could-have, would-have situation, but I didn’t have control over it,” McGowan said.

McGowan’s accident went on to affect him for weeks as he reapplied gauze and antibiotics and wore hats during the summer to mitigate scarring. Since his fall, he said he has put more effort into making sure that another accident doesn’t happen.

“I don’t go up hills without my handlebars anymore, and I try to take care of my bike a little bit more, too; I make sure my chain is always tight and oiled. There was a bad link in the chain, and I think that’s what caused it to come off in the first place.”

While his ordeal changed the course of a number of months, a first-year civil engineer major Megan McWilliams experienced the more common result of a bike crash: mild injuries and an interruption in her usual flow of transportation to class.

“I was going pretty fast, passing the Giedt bike circle a little after the intense between-class rush. This chick was at a full stop, I assume waiting for a place to enter the circle,” McWilliams said. “Without looking, she started to go in front of me and I just hit her. She fell, I stopped and rolled my ankle. Her front tire was all messed up, but otherwise she was okay. She was mostly surprised and said that she didn’t see me. It’s like, ‘Yeah, no kidding, that’s exactly the problem — you weren’t looking.’”

McWilliams attributed the lack of serious injuries to simple chance.

“I was going fast enough to hurt her and myself — it was just lucky that I only hit her tire. Because of the crash, I was really late for class and hurt my ankle. People seriously need to learn how to yield,” McWilliams said.

Yielding woes have plagued on-campus cyclists since the incarnation of biking as the common form of transportation. However, as Takemoto-Weerts explained, roundabouts have negated much of the once-dangerous conditions and have allowed for UC Davis’ paths to handle the boost in enrollment, and subsequently, bikes on the road.

“It’s at the intersections that collisions are most common. As an example, at Hutchison and Bioletti, nobody ever obeyed the stop signs. When we added a roundabout last year, almost overnight, all the problems with that area were gone,” Takemoto-Weerts said. “Roundabouts are not just for fun. They work a lot better than unstructured intersections.”

In the 1970s, the roads on campus were the same size as they are now, but they lacked the now iconic bike circles. At each four-way intersection, bike traffic would back up at each class break with only a brave few daring to dart across at a time, according to Takemoto-Weerts.

“Some unsung hero decided to put in a roundabout [at the Silo],” Takemoto-Weerts said. “They went to the fire department, got some old hose and made the center circle. That way they could adjust the shape and radius as they observed how people used it, and chalked down some arrows to show people which way to go. As soon as that one was shown to work, they put more in. Now we have around 25 roundabouts on campus, including the ones in West Village.”

Despite the changes made in infrastructure, accidents still do happen. In avoiding them as much as possible, Takemoto-Weerts encouraged students to obey the rules of the road and to remember that the vehicle code that applies to motorists also applies to bicyclists, including but not limited to obligations to stop at stop signs, use appropriate lane positions while riding in traffic and utilize hand signals.

And if all else fails, having a helmet doesn’t hurt, although some students are more than hesitant to wear them.

“I didn’t consider [getting a helmet after my crash],” McGowan said. “Not even for a second. Should have. I don’t know, it kind of sucks to have a helmet, and it’s a pain to carry around.”

Takemoto-Weerts said he doesn’t blame them. Requiring helmets on campus has been proposed a number of times, but due to expected declines in biking if such an ordinance were to pass, for now, helmets are for the cranium-conscious and accident-wary.

“I always wear a helmet, but I don’t preach for helmets,” Takemoto-Weerts said. “No bike helmet has ever prevented a crash, it’s only prevented injuries. In the world of bicycle advocacy, it’s an issue of major controversy. Some people just won’t do it. I’m more focused on getting people to ride in a safe manner.”

HANNAH KRAMER can be reached at features@theaggie.org.