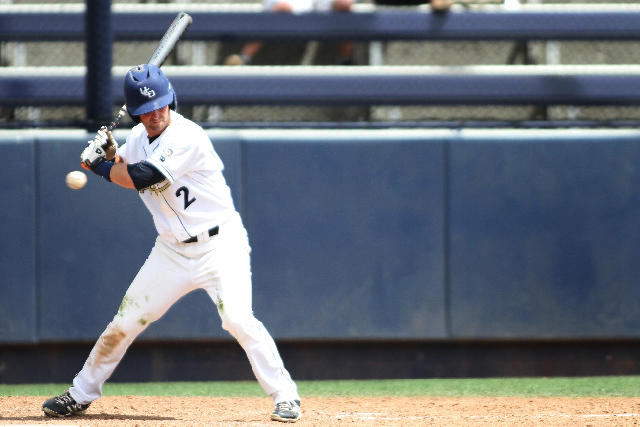 After the UC Davis baseball team broke a four-game losing streak with win over Saint Mary’s on April 22, the team seemed poised to emerge out of its midseason funk. However, the Aggies’ tailspin picked up right where it left off before the Saint Mary’s game, as they were swept by first-place UC Irvine on April 26 and April 27. The Aggies have now lost seven of eight, and they have won just three times in their last 14 games.

The UC Davis weekend MVP was the weather, which caused the April 25 series opener to be rained out. The teams then played a doubleheader on April 26.

UC Davis (17-23, 3-12 Big West) was actually set to win the morning game, as senior Harry Stanwyck pitched a gem. The right-hander allowed just four hits and an earned run over eight dominant innings, striking out six. He retired the first 11 batters he faced, and he left the game in the ninth with a runner on and the Aggies up 2-0. However, UC Irvine (28-14, 11-1) rallied off closer Zach Stone, sending seven batters to the plate and scoring four. The Aggies lost 4-2.

In the nightcap, UC Davis was once again doomed by its bullpen, falling 4-1 on three late runs. Aggie starter Spencer Koopmans tossed six innings of three-hit ball, and the junior righty allowed only an unearned run. Junior Raul Jacobson, who came in relief of Koopmans, allowed three earned runs in two and one-third innings of work on five hits. All three runs came in the eighth and ninth innings. Junior Nick Lynch led UC Davis with two hits on the game.

On April 27, UC Davis once more received an incredible performance by its starter and once again couldn’t get anything going offensively to pull out a win. Senior right-hander Evan Wolf threw his first career complete game, but he was doomed by a bloop single with the bases loaded in the top of the ninth, and the Aggies fell 3-1, completing the three-game sweep for the Anteaters. Wolf was dominant all day, allowing just five hits and efficiently managing his pitch count. The loss dropped Wolf to 3-4 on the season. The UC Davis offense continued to struggle at the plate, getting just six runners on base.

UC Davis, tied for last place in the Big West, should have an opportunity to get off the schneid and pick up a win or two over Cal State Northridge, who is just 4-8 in conference play and 15-28 overall. The teams will meet in Northridge, Calif. from May 2 to May 4.

SCOTT DRESSER can be reached at sports@theaggie.org.