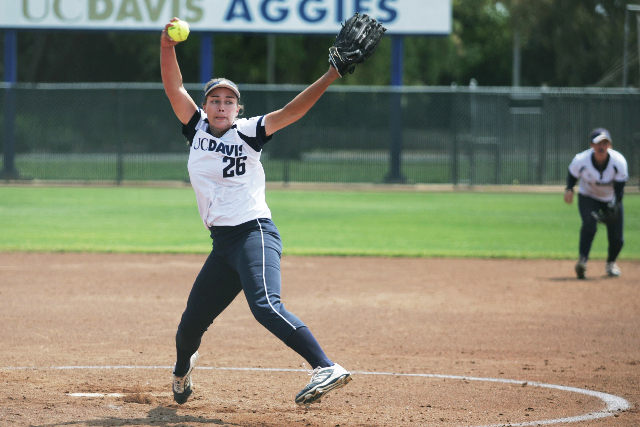 However, the Gauchos were able to get an early start in the series, going up 2-0 by the third inning of the first game.

The Aggies would not accept defeat though, as they went off for a monstrous five-run fourth inning. The bottom of the fourth was led off by UC Davis’ junior first baseman Amy Nunez’s homer to right field, her third of the season. Right after, sophomore designated player Kelly Zboralske hit her sixth home run of the year to left center, tying the game at 2-2.

Zboralske continued to prove that she is the Aggies’ best offensive option. Her .317 batting average, six home runs and 21 RBI leads the team.

The power hitting of Nunez and Zboralske opened the floodgates and the Aggies pounced on the Gauchos’ pitching for three more runs, giving UC Davis a 5-2 lead. From there, the relief pitching combination of sophomore Leah Munden and freshman Andrea Reynolds pitched 2.2 innings of shutout baseball to seal the game.

Game two of the doubleheader was the complete opposite of game one. The Aggies quickly jumped out to an early 2-0 lead in the first inning. Zboralske once again came up big, hitting a single and driving in the two runs home.

UC Davis seemed to be set up for a high-scoring game after it scored those two runs in the first. However, this was not the case, as Gauchos pitcher Shelby Wisdom settled down and pitched six innings of shutout softball after the rough first inning.

Meanwhile, the Gauchos’ bats began to heat up and runs began to flow. The Aggies gave up three runs in the fourth inning, one run in the fifth inning and was battered for five runs in the sixth inning.

Munden, who pitched well in relief earlier in the day, struggled. She gave up five runs in four innings pitched, four of them earned. With the Aggies’ offense struggling to hit against Wisdom, who pitched a complete game, and the pitching staff bleeding runs, the Gauchos were able to cruise to an easy 9-2 win.

With the series tied up at 1-1, UC Davis headed into the rubber match on April 20 hoping to get yet another series victory against a conference opponent. Unfortunately, this was not meant to be, as the Gauchos squeezed out a tight 1-0 victory.

Both the pitchers for UC Santa Barbara and UC Davis were excellent. Wisdom once again pitched for the Gauchos and once again completed the game. This time however, she pitched a shutout as well.

Freshman Dana Cruse had one of her best pitching performances of the season. She went all seven innings and only gave up three hits. Unfortunately, this outstanding performance was not enough to give her the win.

In the top of the sixth inning, UC Santa Barbara’s Stacy Cavazos was hit by a pitch. She then proceeded to steal second and was bunted over to third by Kristen Clark. Arianna Palomares took a pitch by Cruse and drove it to center field, which allowed Cavazos to score off of the sacrifice fly. This put the Gauchos up, 1-0, where they would stay for the rest of the game.

After losing the series, the Aggies fell to 15-27 overall and 4-8 in the Big West conference. UC Davis will head to Stockton, Calif. to face off with the Pacific Tigers for a quick one-game matchup on April 23.