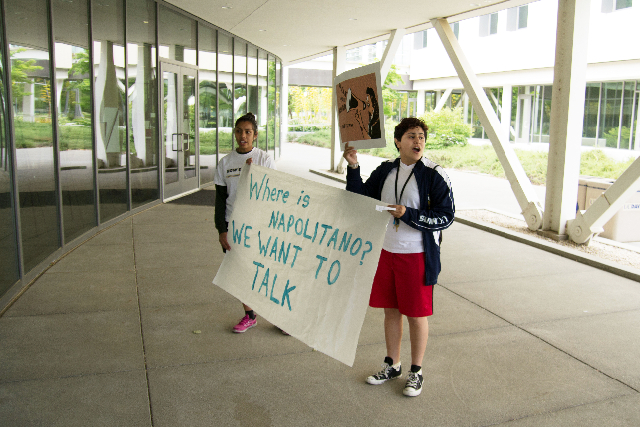 On April 26, UC Davis undergraduate and graduate students gathered in front of the Student Community Center (SCC) to protest a campus visit from University of California (UC) President Janet Napolitano. Napolitano was visiting the school to speak at the Fourth Annual UC Global Health Day.

Maria Salazar, a third-year chicano/a studies and psychology double major who was participating in the protest, said that the visit was not publicly announced to students.

“A lot of student leaders, like the student chancellors and leaders in ASUCD, had no idea she was coming,” Salazar said. “We had to be told by other student leaders on other campuses.”

Salazar said that they were first notified of Napolitano’s visit from a post on the UC Irvine website that she would be at UC Davis. According to Salazar, the public is supposed to be notified when Napolitano makes campus visits.

Abrahan Tapia, a fifth-year psychology and chicano/a studies double major, said the purpose of the protest was to show that the students do not understand or agree with the decision to have Napolitano as UC president.

“We’re trying to show we’re still opposing her appointment,” Tapia said. “We want to know why they picked her over other, more qualified people.”

Tapia said that another reason for the protest is Napolitano’s previous experience as the U.S. Homeland Security secretary. Many students worry about how her past experience with deportation will affect current students.

“She was the chief deporter of immigrants,” Tapia said. “She’s responsible for breaking a lot of families apart.”

Guadalupe Espinoza, a second-year psychology and human development double major,said Napolitano’s high security when visiting campuses and supposed cover-up of her visit was another reason for concern. Espinoza said that the police presence at her events appears as if she finds students to be threatening.

“We want to know why she needs so much security and why she is considering us a threat,” Espinoza said. “The police presence at the schools also affects how the media frames her.”

Students at the protest said that they wanted to talk to Napolitano regarding her position as UC president. One of the main goals of the protest was to speak with Napolitano.

“We want to get her attention and show that we’ll always be there,” Tapia said. “If she’s willing to talk to us, we would like to talk.”

Protesters handed out fliers during the protest to address its purpose and goals. A list of questions addressed to Napolitano were on the fliers and included, “Why do you need so much security when coming onto campus?” and “Given that you have no educational background, why do you think that you’re qualified to run such a large educational institution?”

Tapia said that the protest was broadcasted via social media with the hashtag, “#no2napolitano.”

Brooke Converse, a UC Office of the President (UCOP) spokesperson, said that UCOP did not know what the purpose of the protest was.

“We are aware that there was a very small protest at Global Health Day, but we do not know what they were protesting about,” Converse said via email.

MELISSA DITTRICH  can be reached at campus@theaggie.org.