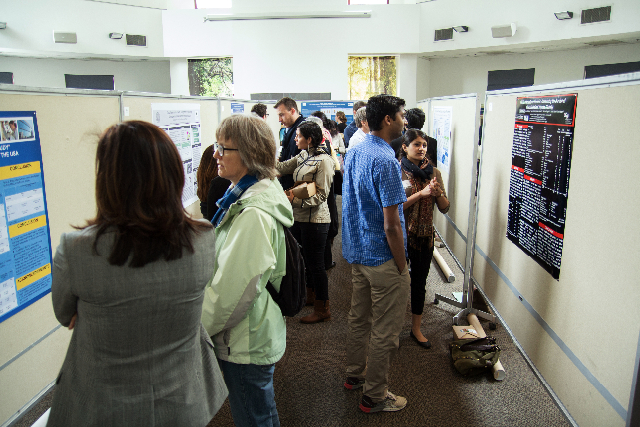 On April 26, UC Davis held the fourth annual University of California (UC) Global Health Day (UCGHD). The event brought up issues such as environmental global health, maternal and child health, animal health and illness and epidemics around the world. Students and faculty from all 10 UC campuses were present at the event.

Patricia Conrad, a professor in the UC Davis School of Veterinary Medicine and co-director of the One Health Center of Expertise, led the event planning and served as the chair of the UCGHD. Conrad said that the idea for UCGHD was initiated by the UC Global Health Institutes on each of the UC campuses in an effort to bring the campuses together.

The event has previously been held at UC Irvine, UC Berkeley and UC Riverside.

“We volunteered to host this year, but everybody wanted to have it at Davis,” Conrad said.

One reason for this was to follow the pattern of rotating holding the event from a school in southern California to northern California. Conrad said that UC Davis also has a lot to offer in terms of global health.

“UC Davis values the importance of humans and animals, especially with the veterinary medicine program,” Conrad said. “We also have strong environmental policies that apply to agriculture and human health.”

During her speech, Napolitano addressed the importance of student and faculty research in contributing to global health.

“We teach for California and research for the world,” Napolitano said. “We need you to work together and solve these most complex and urgent problems.”

Napolitano said that she hoped to use her position as UC president to help students gain funding for their projects from other sources. Much of the research that students do may be looked over or not noticed because of the lack of funding.

“We need to educate funding sources about how they can help fund research all throughout the University,” Napolitano said. “That’s something the UC president can do.”

Conrad said that although this is the fourth Global Health Day, it is the first one to include participation from all 10 of the UCs. She said there was enthusiastic support from student health committees through embarking on research related to global health, creating videos for a video competition and helping to plan the event.

“We want everyone to know about the importance of global health, but also to know that it starts locally,” Conrad said.

A poster session during the event included a variety of students from all of the UCs exhibiting the research they had done relating to global health.

Shashank Anand, a third-year bioengineering and biomedical engineering major at UC San Diego, presented his poster entitled “Engineering Low Cost Diagnostic Medical Equipment for the Detection of Antiretroviral Therapy Failure for HIV Positive Patients in Mozambique, Africa.” He said the purpose of the research was to enhance already-created equipment to help detect HIV in patients in Africa. The research aimed to specifically create low-cost equipment to make it easier for patients to get tested.

Anand said that it was his second year at UCGHD and that he was thrilled to be there. He said that, as an engineer, it was beneficial to get a different perspective of the event’s topics.

“Considering people’s cultural background and seeing how we can adapt it into our design process is really helpful,” Anand said.

Jonna Mazet, a professor in the Department of Epidemiology and Disease Ecology at UC Davis and executive director of One Health Institute, was one of the presenters. She discussed how collaboration and creativity can be implemented in efforts to combat widespread diseases across the globe.

She has also spoken at UC Riverside and finds it an honor to speak at the UC Davis Conference Center. She said that teamwork is one of the most important aspects of her job, as it forms the basis of her principles.

“I think that being here together with our colleagues and understanding what’s going on on all our campuses and then having the opportunity to discuss and build collaborations so we can really solve problems is critical,” Mazet said. “UC Global Health Day gives us the opportunity to do that.”

Mazet hopes that people will take away the idea that a combination of networking and innovation is the most effective strategy in combating disease and solving global health issues.

“We need innovations to solve global health problems, and to do that we need to form partnerships and to really commit to solution-oriented science,” Mazet said.

Andrew Hargadon, a professor of technology management at the UC Davis Graduate School of Management and the founding director of the Energy Efficiency Center, presented with Mazet and emphasized the need to take action. According to him, there are endless issues that need to be investigated and resolved.

“When we find real solutions to the problem, we think we’ve done the job,” Hargadon said. “That is rarely ever the case.”

MELISSA DITTRICH and JASMINE MANGABAY can be reached at campus@theaggie.org.