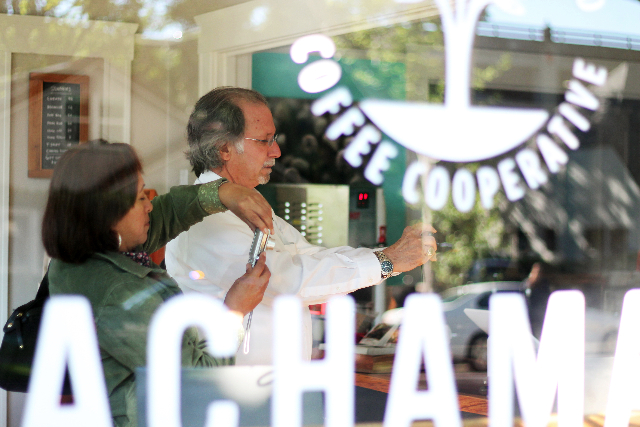 A great cup of coffee is more than your morning caffeine fix. At Pachamama Coffee Cooperative, a great cup means a high-quality drink sold directly from producer to consumer.

Pachamama Coffee Cooperative (Pachamama) occupies the corner of First and E streets in downtown Davis, and to the unsuspecting consumer seems like a typical college town coffee shop. A friendly barista, complete coffee menu and great patio complete the image.

What Pachamama’s customers may not initially realize is that by purchasing that cup of Guatemalan drip coffee instead of their usual Starbucks Americano, they’re voting for social change.

Pachamama Coffee Cooperative is owned by over 140,000 farmers in five different countries: Ethiopia, Peru, Guatemala, Nicaragua and Mexico. Pachamama is the only company in the United States that’s 100 percent owned by coffee farmers, said Thaleon Tremain, the general manager of Pachamama.

That means that the profits made from Pachamama coffee go directly back to the farmers themselves, because they’re the ones selling it. Many similarly advertised companies have a middle man that skims the profit and gives only the wholesale prices to producers.

For instance, ‘fair trade’ coffee may be sold by farmers for $2 a pound to someone who turns around and marks it up to $16 a pound, ending with a tidy $14 profit margin.

By giving the farmers direct access to coffee sales, instead of making only $2 a pound for their coffee they’re able to sell it for three to four dollars a cup at coffee shops, which equates to more than $60 for a pound of coffee.

Across the board, consumers are looking for higher quality coffee, and the coffee engineering class offered by UC Davis is proof of that fact. But the point that many people miss is that you can’t make high quality coffee without high quality beans. Sure, Tremain mentions, you need a good barista and a good roaster as well, but it all starts with the beans.

In Ethiopia, one of the countries that Pachamama’s coffee is grown in, farmers are still growing beans like they did 3,000 years ago, said Stanley Kuehn, the regional director of the Latin American and Caribbean National Cooperative Business Association who works to promote Pachamama and other similar Co-Op businesses.

This old-fashioned growing technique means that coffee plants aren’t pounded with synthetic chemicals, and growers don’t become rich overnight by using seeds that produce ‘Cadillac’ crops in one cycle. The result is better tasting, higher quality beans that become more than a scalding shot of caffeine, according to Tremain.

These Co-Op farmers can’t grow the high quality coffee that consumers have grown to expect if they’re not supported and paid fair prices for their product.

Coffee rust fungus has destroyed coffee plants worldwide and put strain on small farms, forcing them to close. Alexa Marin, a farmer from Nicaragua, lost 90 percent of her normal production this year due to the fungus. Across the board, coffee production in Nicaragua is down by 40 percent.

Marin is optimistic about replanting, however she said that other farmers who experienced similar devastation are being forced out of their homes because they don’t have the means to recover.

In order to move forward, Marin has to change coffee varieties and improve her growing practices to keep the problem from repeating itself. It’s a serious reinvestment in her plantation that she’s only able to make because of the financial stability that her involvement in the Pachamama Co-Op has given her.

“It’s not charity, it’s an investment. They care because they built it and paid for it. It’s not cheap or easy for them, but that’s why it works, they have skin in the game,” Tremain said of the farmers that make up the Pachamama Co-Op.

In the indigenous language of Central and South America, Quechua, “Pachamama” means Mother Earth. A common phrase used in these areas is “Salud la Pachamama.” It means to share with Mother Earth so that she continues to produce for you.

During the month of May, a small percentage of Pachamama’s sales will go back to preventing cervical cancer in local Nicaraguan communities by bringing mobile examination equipment directly to women. According to Marin, this is a simple, cost effective strategy that will pay huge dividends for the health of these communities.

Marin says that this Co-Op is the best alternative for small farmers.

“It gives small producers the ability to improve their incomes,” Marin said. “It improves the quality of the coffee and the quality life. Small Co-Ops have always been marginalized by bigger estate farms, but this is a way to dignify the work that we do.”

TAYLOR CUNNINGHAM can be reached at features@theaggie.org.