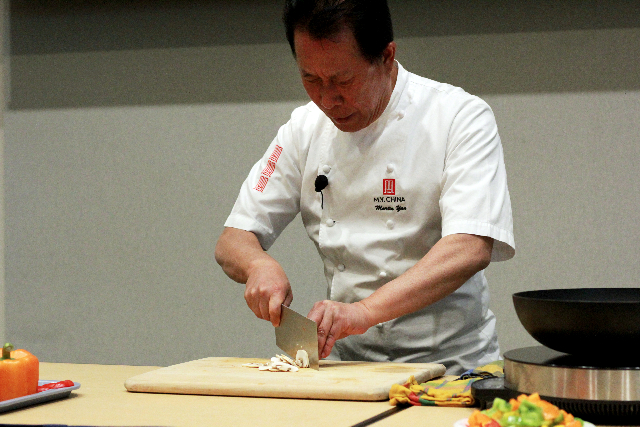 World famous chef and UC Davis alumnus Martin Yan was this year’s speaker at the ASUCD Entrepreneurship Fund’s (E-Fund) annual event, held at the Student Community Center on May 13.

The E-Fund was founded Fall Quarter 2012, and its main goal is to promote entrepreneurship among undergraduate students. This year, Yan was chosen to speak, not only for his fame and skill, but also for his love of cooking and his success in turning it into a long-thriving career.

“I’m not much of a business person, but I believe you’ve got to believe in yourself,” Yan said. “And passion — you’ve got to love what you do and never give up.”

Yan was born in Guangzhou, China and formally started his culinary training at the age of 13. When he moved to America, Yan got a master’s degree in food science at UC Davis and later became a teacher at an on-campus cooking extension program focusing on Asian cuisine.

“My time in Davis was a very memorable time because I made a lot of friends and got to know a lot of people,” Yan said. “Of course my food and cooking was influenced by my upbringing in China as well.”

Yan is most famously known for his television show “Yan Can Cook,” which first premiered on PBS in 1982. The show focused on cooking Chinese food and since then he has also appeared on “Iron Chef America” and “Hell’s Kitchen.”

During the event, Yan began by sharing his journey of coming to America, arriving with only $5 in his pocket. Though his passion for the culinary arts certainly helped him in his success, he said that he began to teach cooking as a way to earn money, and that money is a part of the reality of becoming an entrepreneur.

“Money gives you the opportunity to do other things,” Yan said. “If you can’t take care of other yourself, how can you help other people?”

For this reason, he said that to be an entrepreneur, you need to learn how to make sales of not only a product but also of yourself.

“Get your name and image out,” Yan said. “Take advantage of an opportunity to create more opportunities for yourself.”

The time Yan spent in Davis, the Bay Area and China influenced his style of cooking. Especially influential was the time he spent teaching in Davis — an opportunity that he said provided him with unique challenges.

“In the old days, only some of the ingredients [for making Asian cuisine] were available in Davis,” Yan said. “So I tried to use local ingredients that you can buy in supermarkets.”

Even after living in the Bay Area and Davis, Yan has still kept close ties to China by frequently visiting the country and even Chinatown in San Francisco. In addition, Yan recently won the Top 10 Outstanding Chinese Award, an award given to public figures who encourage a cultural dialogue between the West and China.

Yan said that being a cultural mediator between the States and China is an important part of what he does.

Since graduating and teaching in Davis, Yan has appeared on television over 3,000 times and written 30 cookbooks. Despite his busy schedule and success, Yan still makes time to return to his alma mater.

A way that he still remains connected to campus is through his involvement with the UC Davis Confucius Institute (CI). The CI was in the works for about three years before opening up to the public in 2013. Yan was involved with the Institute since its inception, and was a main proponent in coming up with its theme of food and beverages. He still occasionally aids the CI by bringing in chefs and giving seminars and presentations.

Apart from the CI, Yan is actively involved on campus in other ways as well. Last summer, Yan hosted a 10-day tour of Southern China — exclusively offered to UC Davis alumni. This E-Fund talk is the most recent campus event that he partook in.

Robert Hsu, chairman of the E-Fund and a third-year computer science major, said that Yan was chosen from a large pool of speakers.

“I think a lot of people are very proud of the fact Chef Yan attended UC Davis and that in some ways he is an emblem of the school,” Hsu said.

Ultimately they chose Yan because of the many qualities that the E-Fund values. Some of his qualities include his passion for his work and creativity while doing it. They also thought that his unique story to success would interest students. They also valued his tight affiliations with the UC Davis campus.

“We believe Martin Yan, with his entrepreneurial success, could give great insight into finding your passion and creating a business from it,” said vice chairperson of the E-Fund and a third-year managerial economics major Phi Nguyen.

A point that Yan stressed during the event was for students to do things differently. He said that there were many talented chefs in Davis and maybe millions in the world. But very few of them went on to become famous.

“To be good at what you are doing is not enough,” Yan said. “When you do something, try and be different.”

Toward the end of the event, Yan demonstrated his culinary abilities and cut up several vegetables, including peppers and onions. He also performed his famous 18-second chicken-deboning act.

Even after thousands of television appearances and endless hours working as a chef, cutting a particularly thin slice of onion still thrilled him.

“When you are a student and you love to play tennis or play music or you love to cook or whatever,” Yan said. “Even though it’s a job, it’s also your passion and something you enjoy. If you are able to carry your personal interest and passion into your job, then you don’t have to work a day of your life.”