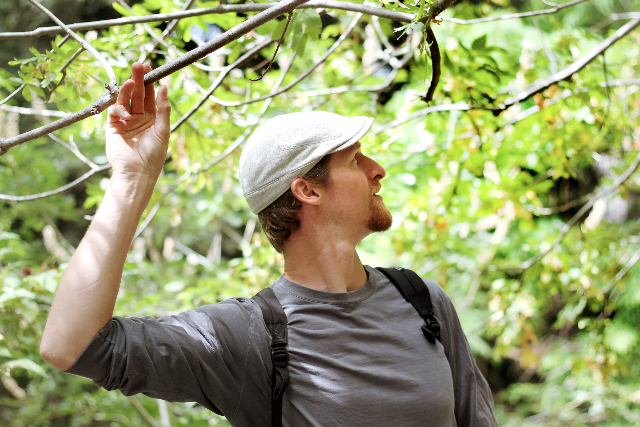 When I first saw Kevin Smith, he was twining cord using strips of a leaf from a New Zealand flax, one of several useful plants one might find on a walk through Davis.

Smith is a Ph.D. student in archaeology at UC Davis, pursuing his interest in studying and practicing how our ancestors lived. He’s written a blog called “Countryman: Foraging California’s Wild Side,” where he details many of his adventures around California and in local areas, hunting wild animals, collecting edible plants and then cooking gourmet meals. He took a couple hours from his studies to show me a few samples of California’s wild side that are right here in Davis.

In our short trip through the Arboretum, Smith pointed out and told me the names of several different plants and what they could be used for.

He identified and attempted to harvest a sample of chia seeds from a chia sage, which he said was once a staple food for the California native peoples. He said the leaves make a good herb for cooking, as do the leaves of the California bay tree, which we also found on the path. Elderberry plants have edible berries and flowers, while the rest of the plant is poisonous. He pointed out other plants that were useful for crafts, like basket weaving, or medicinal purposes, such as the disinfecting properties of yarrow.

“I was working as a shepherd up in Northern California for a summer, and I had this baby goat stab his sharp horn right into my hand, and it went so deep that I couldn’t see the back of the hole,” Smith said. “I cleaned it all up, put alcohol and stuff on there, but it wouldn’t close. After like three days, I took all the bindings off, crushed up some yarrow, stuck it on there, 20 minutes later it closed up, no joke, I still can’t see where the scar is.”

Our small adventure was only a taste of his knowledge and his more regular experiences. Although he did not collect food or otherwise useful materials this time, he often does. He was not short on foraging stories during our tour, however, and some of them can be found in his blog, which he said he started as a result of living in a more urban environment during college.

His latest entries include him and his friends harvesting unpicked oranges from a couple of trees around Davis and making orange marmalade, as well as catching crawfish in the Sacramento River Valley District while on a spearfishing trip.

Smith’s longtime friend and fellow spearfisherman, Kirby Morejohn, who just weeks ago fought a shark over a 60-pound sea bass, joined him on the latter trip. Morejohn is a marine biologist and he commented on the several benefits of this kind of hunting, including being able to see and appreciate life as well as feed yourself.

“You can spearfish or grab a lobster or abalone or scallop, clams or whatever and make your hobby fill your stomach,” Morejohn said.

While we browsed the Arboretum, Smith commented on the economic side of foraging.

He did admit that foraging does not make up his entire diet, and he does go grocery shopping. However, fish is a staple in his diet, and he said he can’t remember ever buying fish from a store. Foraging is a regular activity for him, and even the day we spoke he had eaten some dried wild mushrooms for lunch and tried his first mulberry. He said he has his childhood to thank for his interest in hunting and foraging.

“My oldest memory is digging shellfish with my dad and my brother, out in Tomales Bay,” Smith said.

As a kid he began learning to identify what foods were safe to eat, a practice which aids him even today as he forages for wild mushrooms and continues to learn about plants that could be helpful or harmful.

“The golden rule is, identify everything twice in the field and once again in the kitchen,” Smith said.

He stressed the importance of staying safe and not eating anything without knowing what it is or what process might be required to make it edible. Smith pointed out the irony in the fact that this type of knowledge is very old.

“It seems strange looking at an archeological perspective, because this is all knowledge that all of our ancestors had and applied every single day, which is why we’re alive and able to talk right now,” Smith said. “It seems strange to me that we’ve lost so much of it. And I love agriculture, go Aggies, but at the same time there’s great power in knowing your local edible and utilitarian plants.”

He has continued to exercise this power by collecting food and generally making use of what is freely available to him. He believes many useful resources are underutilized, and recalled an incident with an orange tree from which he picked an orange that was hanging over a wall.

“This branch was clearly in public domain,” Smith said. “There was a pile of rotten fruit on the ground, and that’s my first indicator. If there’s rotten fruit then I’m taking an orange if I’m hungry, so I picked this orange, and this guy yells, ‘hey, that’s not your fruit.’ And all I could think was, ‘you’d actually rather see this rot on the ground than have a stranger eat an orange off this tree.’ That’s a strange mentality to me.”

Smith and his foraging companions expressed interest in not letting resources go to waste. His friend Alex Izzarelli said one of his hobbies is collecting wood to make parts for guitars.

“A lot of materials I use are scrap woods that people don’t use, or even parts of trees that I collect,” Izzarelli said.

The second half of my adventure with Smith consisted of an unfruitful search for a stray almond tree off of a bike path beyond the east end of the Arboretum. Although we never found it, Smith mentioned that Davis is full of nuts, with various trees in the public domain. These, among the many other useful plants, offer their crop to anyone that will take it.

“All of this is free,” Smith said. “One of my favorite things about it is nobody’s watering it, nobody’s putting fertilizer on it, nobody’s doing anything, this stuff just volunteers. It grows in the fog, it grows in the rain, it just grows, and you can eat it and it’s really good for you, so why not?”

At the end of the day, whether a foraging trip offers up a bounty or not is of little importance. Smith and his friends emphasized the fun of being able to interact with each other, as well as with nature.

“I use the term adventure somewhat loosely,” Smith said. “But I think a lot of people have got this concept that in order to go on an adventure, you have to buy a bunch of gear, fly across the world and do something crazy. That’s great, that is an adventure, but at the same time, if you’re only waiting for that one experience, you’re missing out on all of these cool adventures that are all local. Don’t wait for the big picture, crazy adventure on down the line, instead just get out, have an adventure around the corner.”

NICK FREDERICI can be reached at features@theaggie.org.