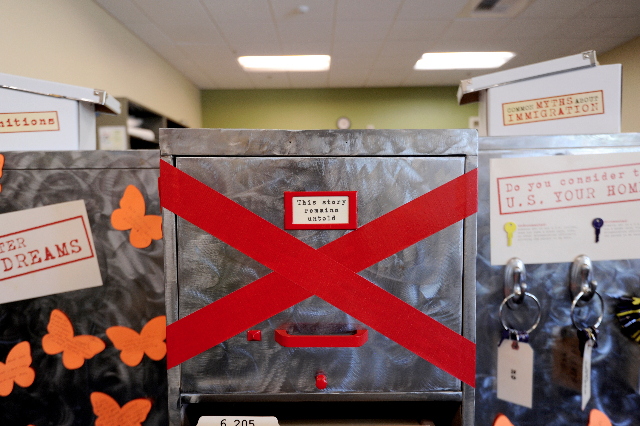 Exposing contemporary issues through design, the filing cabinet drawers of the “Filed Away” exhibit contain the objects and stories of anonymous undocumented students at UC Davis.

This exhibit is the thesis project of designer and MFA candidate in the design department Emma Thorne-Christy. To her, “Filed Away” strives to uplift these objects and stories through her design and museum skills in order to bring awareness to undocumented students.

“This is about connecting to people’s personal everyday objects. Putting them under Plexiglas creates this power,” Thorne-Christy said. “They say in the museum world that there is a museum effect that comes out of putting a case over something. Suddenly a cell phone charger becomes a piece of art.”

Other objects in the temporary exhibit include a keychain, a couple blankets, children’s toys and a small painting, all symbolizing the experiences of the undocumented person to whom they belong and will be returned.

In order to reach out to these students, earlier this academic year Thorne-Christy approached S.P.E.A.K. (Scholars Promoting Educational Awareness and Knowledge), a student organization on campus that supports undocumented students and makes the community more aware they are present on campus.

“We were basically in charge of getting the people to provide the objects, like a middle person to the undocumented community to keep the objects safe and stories anonymous,” Rios said.

In addition, the advisory board helped come up with the name of the exhibit.

“Given the way that many of these people are filed away and kind of forgotten, there are a lot of untold stories. That’s how the idea of the file cabinets came about,” Rios said.

Thorne-Christy had been searching for a topic that would resonate with her target audience, UC Davis students, and thought this might be it.

“I was gearing the entire exhibit towards students that knew a lot about the topic and just wanted to have their voices heard, which definitely worked, and then students who had no idea,” Thorne-Christy said.

However, she did not expect to get such a response from the UC Davis staff.

“I’ve had the administration from financial aid, counseling and admissions all come up to me and have very lengthy discussions with me about how much they appreciate the exhibit,” Thorne-Christy said. “I think sometimes the administration can be detached from student life, and this is a way for them to gauge what is going on, because everyone knows, within the system, that there is some kind of resource center happening.”

Such increased awareness of undocumented students is one of the goals of the “Filed Away” exhibit, according to all three sources.

“And not sympathy, but more like empathy, being able to relate to these students,” Rios said. “We’re all students and we have different sets of struggles and some of us have to go through more than others to be at the same place where we are now.”

Thorne-Christy said that she also wanted to present the facts and make people think.

“Those questions were the first that came to our minds that most people probably can’t answer,” Mendoza said.

However, at a community conversation that took place May 21, those who attended were able to hear answers to some of those questions from a panel of undocumented students.

“We first asked them all to explain when they learned they were undocumented. We talked about the new resource center, which is very much in its developmental phase,” Thorne-Christy said. “I asked the panel to talk about what it was like coming to college.”

In her opening speech to the community conversation, Thorne-Christy expressed her gratitude toward the undocumented students who anonymously contributed objects.

“Because of their bravery we have an exhibit to share,” Thorne-Christy said. “I am incredibly grateful for the trust they put in me and my board to do well by their stories.”

Currently, the exhibit is in the main lounge of the LGBTQIA Center in the SCC, where it will be through June 4 until the objects must be returned to their owners.

“It’s going to break up, but I think there is something kind of beautiful in that,” Thorne-Christy said. “It’s this temporary thing, and the impermanence makes you go to it.”

EMILY MASUDA can be reached at features@theaggie.org.