Robert Reich screens his documentary ‘Inequality for All’ at UC Davis 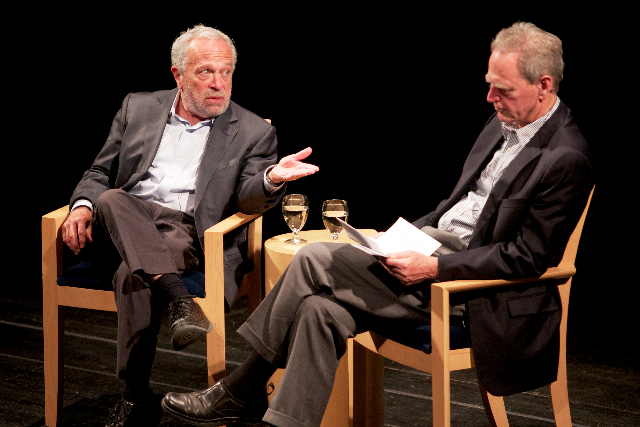 The United States has the fourth highest degree of wealth inequality in the world and is experiencing its worst levels of income inequality since 1929.

These are a few of the key issues discussed in the film “Inequality for All,” screened on May 19 at the Mondavi Center. Robert Reich, former U.S. Secretary of Labor under former President Bill Clinton, and current Chancellor Professor of Public Policy at the UC Berkeley was also present at the screening.

During the question and answer segment after the film’s screening, Reich discussed a number of problems pertaining to the issue of income inequality that he believes greatly impacts students.

“College students are inheriting this problem, which, along with climate change, constitute the largest and most troubling challenges to our future,” Reich said.

Originally, the film was inspired by Reich’s book titled Aftershock: The Next Economy and America’s Future.

“The director, Jake Kornbluth, came into my office one day and said, ‘I want to make a documentary about widening inequality. I’ve read your books, and you’re the person who I want to collaborate on this project with,’” Reich said.

The film was partly funded through a crowdsourcing website called Kickstarter and later premiered at the Sundance Festival. Since its release, it has received many accolades and is often referred to as the Inconvenient Truth for income inequality.

“The richest 400 Americans have an income equal to the bottom 50 percent of Americans. That’s 150 million people,” said Lovell Tu Jarvis, who is special assistant to the dean in the College of Agricultural and Environmental Science and the director of the UC Davis Blum Center for Developing Economics.

Jarvis was also the one who spoke to Reich during the question and answer segment of the event.

“The main reason that I’m interested [in the screening] is because Robert Reich has been a passionate defender of the poor and working person,” Jarvis said.

The Blum Center was founded in Davis about four years ago, after breaking off from its counterpart in Berkeley, which was founded six years previously. According to Jarvis, Davis’ Blum Center is currently sponsoring a number of classes dealing with poverty, and according to the Blum Center’s website, its broader goal is to improve conditions of people in need and make the world a more equal place.

Reich works as a Senior Fellow in the Blum Center’s branch in Berkeley. The Blum Center was also the initial organization responsible for bringing the screening and Reich to Davis.

“I got a call from Berkeley saying ‘would you enjoy having Robert Reich come and screen his movie ‘Inequality for All?’’ and I said I’d love to,” Jarvis said.

After receiving the call from Berkeley’s Blum Center, Jarvis contacted the UC Davis Chancellor’s Office and they collaborated on the event.

According to Louise Uota, the director of the Office of Ceremonies and Special Events, the Chancellor’s Office was responsible for ticketing, preparation of invitations, advertising and a number of other things related to the organization of the event.

The Chancellor’s Office mainly reached out to professors, hoping that they would reach out to their students. Over 500 people attended the screening, and of them a large number were students.

According to Reich, a poll stated that over 80 percent of Americans want to raise the minimum wage. Though an argument commonly used by the remaining 20 percent is that it would harm the economy, Reich claimed that a small raise in the minimum wage wouldn’t do any harm, but in fact would have a positive effect and spur more people to spend their money.

“The typical minimum wage earner is a primary breadwinner, not a teenager,” Reich said.

Reich also added that primary breadwinners often have to buy things for themselves and their families, and no matter how much money one wealthy person spends, there is usually a limit to the amount that they will buy.

Jarvis said that for the wealthy, excessive money is usually put into savings, and savings don’t create more jobs. Seventy percent of GDP is consumption and if people don’t have money to spend, then the economy stagnates.

“There is always a tension between having a system that allows opportunity to people and [also having one that] encourages innovation, hard work and saving,” Jarvis said.

Reich also suggested an increase in unionization, and predicted that more people working in areas like fast food, retail and customer service would unionize.

“They aren’t in direct competition with the global market and technology,” Reich said.

This is especially relevant since fast food, retail and customer service jobs require direct customer and worker interaction, meaning that they have less to fear in terms of their jobs being outsourced to other workers outside the United States.

Reich said he hopes that the film will spur more people to find new solutions for the issue of income inequality, especially students.

“I hope students are inspired to become change agents, and take leadership roles in tackling this problem,” Reich said.