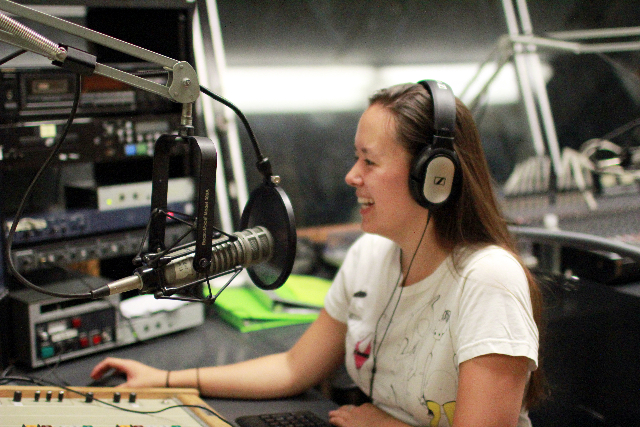 Ashley Hanson began her role as general manager of KDVS on June 1, and will hold the position for the 2014-15 academic year. Hanson began working for KDVS as a first-year and is now a third-year clinical nutrition major. Hanson’s first show for the UC Davis freeform radio station was “Moonwalk With Us,” and she has gone on to host “In The Sun.” MUSE spoke to Hanson about her new role.

MUSE: How do you feel about becoming general manager?
It’s not something I aimed for initially. When I started volunteering at KDVS, I didn’t even want to be on the air. I didn’t even want to be a DJ. I tabled at events, I volunteered to do things around the station and then I was here for a summer, the summer between freshman and sophomore years for me, and I was really bored. Someone convinced me to go through training and then I realized I really loved it. One of my best friends was my co-host and so I was a DJ for the year. In that summer when I was training, someone off-hand mentioned that one of the two of you is probably going to be general manager in a couple of years. I totally wrote that off and said I’m just a volunteer, I’m no one special, but she called it. We haven’t had a female general manager since 2004 and she said yeah, one of the two of you is going to be the next female general manager. I didn’t think anything of it until I was going through the application process. So it wasn’t something I initially aimed for but it seemed like every time I got more involved I wanted to be even more involved. I didn’t anticipate it at all.

Why are there not as many female general managers?
The station is a really funny little subculture. We are literally underground in the basement and we don’t get a lot of exposure so a lot of it tends to be word of mouth. So, your guy friends bring all their guy friends; it’s kind of intimidating going down there. I don’t know why there aren’t more women and I’ve actually seen an increase in female participation in the few years that I’ve been down there so I think it’s definitely changing. This year’s core staff is, I think, 50/50 half male and female so that’s cool. I just don’t know that we’ve had as many female applicants.

What will your role as general manager involve?
I am the interface between KDVS, our volunteers, our staff and the rest of campus. I am the face of the station any time we have to be represented anywhere, so if we have to make a press statement that would be me. Also, we run as a team but I hire the next core staff so we’re in the process of accepting applications and doing interviews for core staff for next year. I get to put together that team of people and pretty much make sure the place runs. If anything goes wrong, I’m on call 24/7 for the entire year. So I have to be the glue to hold it all together.

Will you be making any significant changes at KDVS?
I’m bringing back the assistant to the manager position. We had one some years ago and then it kind of disappeared. Some of our core staff positions come and go as they’re needed. I recognize I’m a busy person; I love the station but I do have other things in my life — I’ll be a senior. I have to know all the legal things and a lot of the technical things about running a radio station and how a radio station works. That’s a lot of knowledge I have to learn very quickly and if I have someone else to supplement and be another depository for that information, that can only help. So I am reinstating that position and I think that’s the first big change. Other things I’m sure will happen as the year goes on.

What will your biggest challenge be as general manager?
They’re [the UC Davis administration] demolishing Freeborn [Hall] or they’re closing Freeborn. Sometime soon in two to four years we’ll be relocating potentially. They still haven’t really given us solid estimates, they could still retrofit the building, we don’t know but it will begin in my tenure, planning for this move. That means digitizing parts of our library so that we don’t physically have to move it, defending the amount of space that we need and asking for more; making sure that the University pays for the relocation and building the new studio and that we don’t have to because we didn’t decide to move, they’ve decided to move us. Those I think will be the big challenges.

What are you most looking forward to about being general manager?
I think it’s going to be a lot of fun. I really love KDVS and all of the fun that comes with being involved there. The music and the events and the people that it brings together. I’ve always wanted to know more about how everything works and I think this is the best way to do that. So really, just working with the people is going to be a lot of fun. We’ve got a huge community that’s not just students. We’ve got this huge community of alumni and other Davis community members, Sacramento community members and that’s something that a lot of student groups don’t get; this consistent involvement of grown ups, real grown ups, that have finished with university and still come back and participate in this college activity.