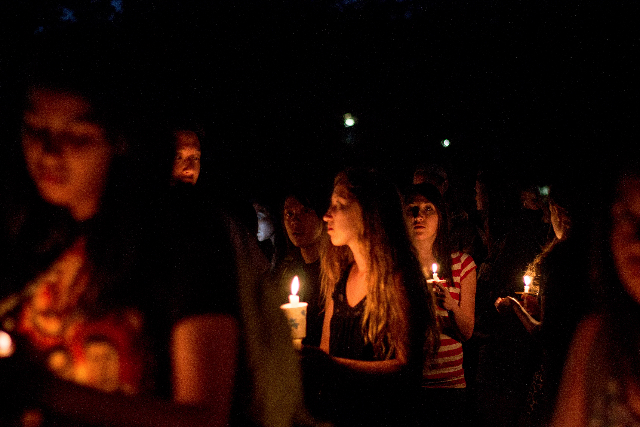 On May 29, a student-organized candlelight vigil to honor the victims of the UC Santa Barbara (UCSB) tragedy was held on the Quad. The event included speakers from both the UC Davis and Davis communities, along with students who personally knew the UCSB victims.

The event was planned by second-year neurology, physiology and behavior, and English double major Sasha Kasper. During the event, she said that a testimony by UCSB victim Christopher Martinez’s father, Richard Martinez, inspired her to plan the vigil. She said wanted to be able to hold a ceremony that would recognize the victims lost during the event and to promote healing for the the people who were affected by the tragedy.

“This vigil tonight is to express our support to the family and friends of the victims, our fellow students at UCSB and the community of Isla Vista,” Kasper said during the vigil. “But most importantly, it is a time to celebrate the lives of the students we lost.”

According to the Facebook page for the vigil, roughly 3,900 people said they were attending.

Chancellor Linda P.B. Katehi, who spoke at the vigil, said that she was tremendously proud of students who gathered and helped plan the event. Katehi also said that the tragedy shows the need for change in the way mental health is treated.

“My generation has failed at treating mental disease as a disease that can be cured,” Katehi said. “Unless we go forward and raise our voices, I’m afraid we will go through the same thing again.”

Katehi also said that the ability to acquire a gun in America is easier than acquiring a driver’s license and that the gun availability is part of the reason this tragedy took place.

Joe Krovoza, mayor of the City of Davis, and UC Davis Police Chief Matthew Carmichael also said that we as a community have to take a different approach to mental health in order to prevent similar tragedies.

Sarah Hahn and Leilani Kupo, the director of the Women’s Resource and Research Center, also spoke at the event. Kupo announced a group discussion on gendered violence at the WRRC would take place on May 30.

Sydnee Norton, a UC Davis student who was in Santa Barbara on the night of the killing, described her experience of being in a pizza parlor when the drive-by shooting took place. She said it was more important to honor the victims of the night than to express concerns that would give the man who killed the victims more power.

“My family and I, along with everyone in the restaurant, were safe and uninjured, but this will forever alter my life,” Norton said. “In my opinion, as a survivor of this tragedy, we do not need to give this individual the power to turn this into something it isn’t … Instead of focusing on him, we as UC Davis students need to have the compassion to help our sister campus and any of us here mourn the loss of the beautiful lives we lost that night.”

An open microphone was available for people who knew the victims to speak about their lives.

Katehi said the event was important because it allowed the UC Davis community to provide support to the UCSB community.

“Many members of the UC Davis community have family and friends at UC Santa Barbara and have been shaken by this tragedy,” Katehi said via email. “It will take courage and compassion as a society and a democracy to address the root causes of these horrific events, but I am hopeful in knowing that the spirit of unity demonstrated at Thursday’s vigil, and the numerous other vigils just like it, will play a key role as we grapple with these challenges.”

Katehi also said that there are two members of the Academic & Staff Assistance Program (ASAP) stationed in Isla Vista for the rest of the week. ASAP provides free, confidential consultant services to UC staff and faculty.

Zachary Ward, a psychologist at Counseling and Psychological Services (CAPS), said that the most important aspect of the vigil is to show support to UCSB students and to each other.

“The vigil is a spot where we can all come together and support each other about this event,” Ward said.

Ward said that students can find resources to get help through appointments and walk-in services at CAPS, the Each Aggie Matters program, which allows students to educate themselves and get help with mental health and through the Just in Case mobile app, which gives specific tips on how to reach out to a friend who might need help.