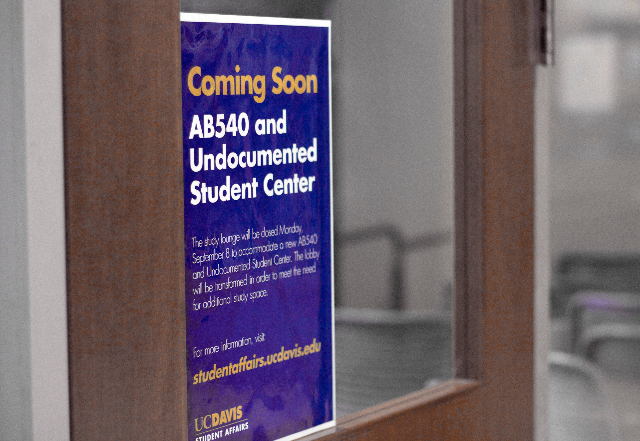 The AB 540 and Undocumented Student Center will be a new addition to the Student Community Center to provide centralized resources for the growing undocumented student population on campus.

The state’s education code was changed to include the Assembly Bill 540 (AB 540) in 2001, allowing certain non-resident students to pay in-state tuition at California public universities if they had received a diploma from a California high school or the equivalent. Specifically, this bill aids students who are considered undocumented. According to the official AB 540 website, a person who does not have the appropriate documents to live legally in the United States, is considered undocumented.

UC Davis has seen nearly a tripling of enrolled undocumented students –  from an estimated 70 in winter 2012 to just over 200 students in fall 2013.

The center’s establishment is the result of years of student advocacy as well as a changing national and campus climate concerning immigration and social inclusivity.

Late last year, University of California President Janet Napolitano allocated $5 million to fund undocumented student resources across the UC system. These funds came as a sign of commitment to AB 540 issues after the initial protest on behalf of the UC undocumented community upon her appointment as UC president.

According to Ana Maciel, third-year Chicano/Chicana studies major, Academic Coordinator of the Undocumented Student Center and Co-Chair of the undocumented student group Scholars Promoting Education Awareness and Knowledge (SPEAK), the institutionalization of the center is a major step toward bringing awareness to a previously underrepresented population on campus.

“Having a centralized space and physical location is a validation that [undocumented students] matter; it shouts ‘It’s OK if you’re undocumented, we’re here to help you,’” Maciel said. “Everyone in the center is an ally, advocate, and general community member who is accepting of undocumented students. It’s a welcoming space where you can seek services without feeling judged for it regardless of immigration status.”

Andrea Gaytan, director of AB 540 and Undocumented Student Center and former assistant director of the Cross Cultural Center, said the new center will aim to be a “one-stop-shop” resource center with a direct referral system for undocumented students’ academic, social and financial concerns as well as an open space to create awareness of the community in general.

“The center is here to support all students and help with educating anyone who is interested in learning more about the undocumented experience,” Gaytan said. “We’re hoping to respect students who intend to remain discreet about their status but at the same time be a space for those students who would like to engage in the larger conversation, not just about individual status but about the issue of immigration in the state and in the country.”

As of now, the center will be made up of transfer and high school outreach and retention interns, graduate student researchers and an academic advising intern to head educational projects.

According to Gaytan, the center will also have formal partnerships with Student Health and Counseling Services (SHCS) and the King Hall Immigration Law Clinic to have fellows in the center to provide emotional and mental health services as well as free legal counsel for undocumented students.

Furthermore this year, through the approval of the UC Office of the President, qualified AB 540 undocumented students are receiving small grants through financial aid to help account for unmet needs. Gaytan said the center also intends to create an emergency fund for undocumented students.

“We’ve found in the past students sometimes face food insecurity, housing issues and often times transportation-related [difficulties] that are unanticipated,” Gaytan said. “We’re developing a mechanism to have these short-term grants available. Other campus entities [like] We Are Aggie Pride also [do this], so we are hoping to model our program after some of those systems.”

Although the building of the center was the goal of many students for the past four to five years, institutional momentum built last winter when six students made up an AB 540 and undocumented student taskforce to oversee how the allocated funds from UC President Napolitano were to be allocated. Maciel said this taskforce voiced concerns of the undocumented student community and proposed solutions which prioritized the establishment of a resource center, later submitted to Vice Chancellor Ralph J. Hexter.

“We said [in the proposal] that there was a problem on campus pertaining to the AB 540 undocumented population, specifically with the lack of resources that weren’t provided to ensure their success while being at Davis,” Maciel said. “We might be [admitting] them but we need to retain them, we need to make sure they graduate because they are students of the institution.”

The signing of the California Dream Act in 2011, made up of AB 130 and 131, is known to be one of the most enabling moments in state legislation for undocumented students, allowing them to receive financial aid and private scholarships through the institution.

“These are students who have always been capable of attending UC Davis, had earned the grades, had the academic kind of background to attend UC Davis,” Gaytan said.

Maciel, along with many others, went through stigmatization struggles as being part of the first cohort of undocumented students to benefit from the California Dream Act.

“We had [difficulty] finding the right people to talk to and the knowledgeable people to talk to because [we had] different needs than the typical resident, citizen student here on campus,” Maciel said. “We were always being bounced around between the financial aid office, the registrar’s office, the community center [but] they couldn’t really help. But then every single time we were bounced to a different office we had to disclose our status and why we were seeking the services that we needed and that was problematic for a lot of undocumented students.”

UC Davis mechanical engineering alum and former SPEAK Co-Chair Nilsen Gomez attended the university before any institutional or state funds were allocated to undocumented students, and has witnessed the shifting financial and social elements of the undocumented student experience.

“In 2009 and 2010 the California Dream Act hadn’t passed yet so for students who were looking for scholarships or any money for school it was really difficult,” said Gomez, who graduated in 2014. “It was embarrassing to say ‘I’m undocumented’ [when departments] didn’t know what it was. Just coming out as an undocumented student was a lot harder because the community didn’t know about the issue as much but I think that SPEAK along with other organizations have really worked hard for the UC Davis community to know that these students actually do come to school here.”

Having been one of the original students to go on a hunger strike in 1990 for the establishment of what has now become the Cross Cultural Center, Gaytan can also empathize with the efforts of underrepresented students and the importance of a center.

“We’ve been very fortunate to have an administration that has been very understanding and supportive of the [process] and has taken a student proposal and helped that materialize,” Gaytan said. “As a former student activist on this very campus I had the experience of administration who wasn’t even willing to meet with students. So to see how things have evolved 20 years later and be part of it from the staff perspective has been really exciting. It is fulfilling to do something that has been shaped by student opinion, voices and experiences.”

Maciel believes that the center is just the first step to a changing campus climate concerning undocumented students.

“It doesn’t matter if you don’t identify as undocumented or AB 540; Allyship is crucial to a movement and crucial to advocacy,” she said. “But if you are specifically AB 540 and/or undocumented there’s going to be accessible resources here for you and hopefully [the center] becomes your second home.”