Outside Lands: It’s Up to You 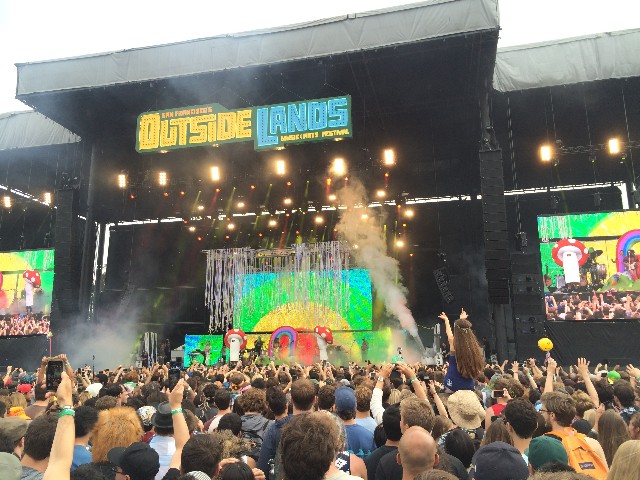 I’m intrigued by any festival where patrons are willing to bury alcohol at its location weeks in advance. That being said, Outside Lands is far more enthralling than a venue for imbibing burrowed spirits.

You could say this wasn’t my first rodeo, despite the lack of bovine. I have been to the hallowed fields of Golden Gate Park before and experienced the gravitas of the festival. But on this expedition, I found myself pondering a specific question: I wanted to know why, with the plurality of music festivals that exist today, would you choose Outside Lands? Here’s my take:

The festival has a proven track record for attracting A-list performers. Between his pulsating sound and his heated, generally one-sided deliberations on the nature of man, Kanye West did shake the earth. That alone should attract a throng. But I was committed to the notion that Outside Lands is not just a colder Coachella. No — while sipping on a generally overpriced refreshment and engrossed in a performance from HAIM, I stumbled upon a revelation.

True, this was no message from Gabriel, but the specific moment occurred while HAIM, surrounded by musicians, discussed their upbringing. It seemed to me that instead of submitting to archaic traditionalism a la Rockwell, they’d rather jam their faces off.  HAIM then proceeded to demonstrate with gusto. There was a clear shared enthusiasm for the festival amongst attendees that I speculate runs beneath the fabric of all music festivals and is exemplified in that trampled field. I know that I’m taking a while to make my point, but I wish to give you my perspective on Outside Lands and shake the veil from your eyes so you can catch what I’m trying to say.

Although the performers are the hook, Outside Lands is not about the music. Arctic Monkeys played with unrivaled Yorkish flair. Macklemore brought a cavalcade of associates, all delivering the artistic grit that distinguishes his expression. The performers delivered. Flaming Lips quite literally lost their mind on stage — their singer, Wayne Coyne, twerked with a giant inflatable bee — but they were simply a means to an end.

Fans of Outside Lands will focus on the success of the lineup and its implications for the succeeding years. I understand that this notion is controversial, but bear with me only for a few more moments. Outside Lands is about more than the music. Once you’ve arrived there, captured in those ramshackle pitched booths, drinking a variety of vintage drinks, consuming the finest accoutrements and experiencing your desired musical articulation, you will find yourself daunted.

With mud caked to your shoes and the cumulative dust and tumult smeared across your brow, you will realize that Outside Lands, unlike any other concert, is a canvas. It holds all the fundamentals of artistic expression and allows you to frolic in the woods. It performs this miracle not in an obscure desert or a secluded mountain retreat, but instead in a place that is only a stone’s throw away from a bustling urban sprawl. With a kaleidoscope of lights illuminating gnarled pines and the stars glinting above, one can capture a fleeting breath of concrete asphyxiation. The power is in the juxtaposition, as some hipster might remark. With such an opportunity, it is up to you to seize the day and combine these elements into an enlightening experience.