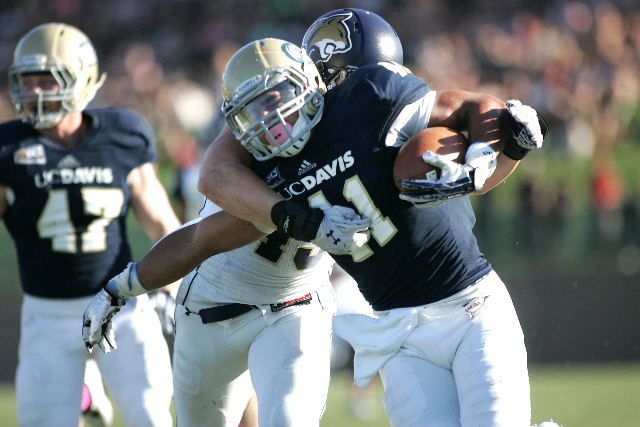 made his debut. Scott completed 27 of 46 passes for 379 yards and four touchdowns, including

Senior running back Gabe Manzanares, who has been limited due to injury, rushed for

UC Davis earned a total of 610 yards on offense, but it was not enough to subdue a

Montana State team that is currently ranked No. 14 in the Football Championship Subdivision.

The Bobcats started the game aggressively, scoring 35 points in the first half. The

Aggies tried to keep up with Montana State, but failed to convert at the same high rate as their

touchdowns, while also leading all rushers with 148 yards.

“It’s tough when you’re playing a team like Montana State. Their team is pretty

Despite the loss, UC Davis demonstrated a lot of potential. Halfway through the third

quarter, the Aggies ran a flea flicker. Scott handed the ball to senior running back Colton

Silvera, who flicked back to Scott. Scott then sent the ball to freshman wide receiver Jermale

Jefferson for a 44-yard touchdown.

“I just wanted to go out there and command the troops, and put points on the board. I felt

really comfortable out there,” Scott said. “The offensive line did a good job. I didn’t get sacked

all the day; there were a lot of great plays by receivers going up and making plays.”

The Aggies have now lost four consecutive games, including losses to two ranked