Inside the Game with Taylor Jern 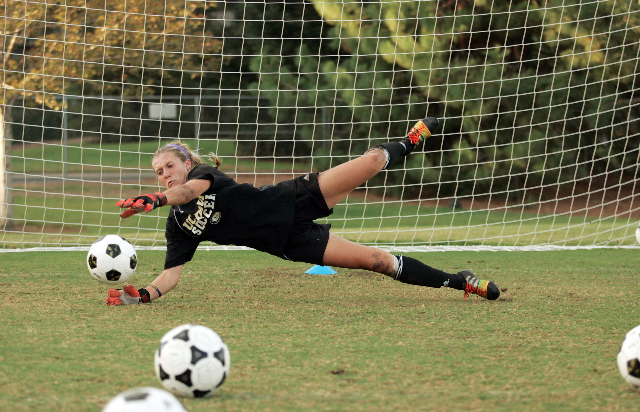 Taylor Jern is a third-year soccer player for the UC Davis women’s soccer team. She is a goalkeeper and recently achieved third place for most total saves in the history of Davis. This week, Jern sat down with The California Aggie to discuss how she got into soccer, what her third-place ranking means to her, as well as what her thoughts and goals are for the UC Davis women’s soccer team this season.

How did you get into soccer and how long have you been playing?

My parents threw me into sports because I was a super active kid. As a four-year-old, I played AYSO bumblebee soccer and things just grew from there.

Did you play in club teams when you were younger? If so, where?

My first club team was the Corona Eagles. However, the bigger clubs are located in Orange County. Since the competition is tougher, I switched and competed for the Irvine Slammers FC [Irvine]. The Slammers are known for their extensive connections and are great with college recruiting since they are a successful, well-known and highlight visible team. The exposure was well worth the switch.

Since the drive from Corona to Orange County was at least 50 minutes, I always carpooled with one or two other people since that made things easier. I was also involved with ASB, volleyball and school council, so time management was key in balancing classes, club soccer and other extracurricular activities. Sacrifice is worth it when it involves something you love.

What are some of the changes you’ve seen in the team since you’ve joined?

The most apparent change was the coaching staff. Student-athletes only work with a handful of coaches throughout college. With the change in personnel, the standards for this team have raised.

How does it feel to be third in the history of Davis soccer for saves?

The rankings have not sunk in, because we are still in season. Plus, soccer is a team sport. If someone receives an individual award, the team is the reason why. Maybe one day [the rankings] will sink in, but for now, it’s all about the team.

Who are some of your inspirational players or mentors?

Ramon Reed [Slammers FC coach] helped inspire me to work toward making my dream a reality. I worked with him for the last two years before attending UC Davis. He not only cares for you as a player, but as a person. He is truly an inspirational coach. I could, and still can, turn to him anytime I have a question. Once I realized that I needed to make the transition from a smaller club to a more well-known one, Ramon helped me realize that I had a chance to make my dream come true playing college soccer.

Being third in saves in UC Davis history, does it inspire you to work more diligently to attain another goal?

Right now, I just want to do whatever it takes to help the team win and advance further than it ever has.

In your opinion, what are your strengths and weaknesses as a team? And how do you plan to advance?

Strong leadership, … work ethic and willingness to sacrifice and dedicate the time and energy needed to improve as an individual are some of our strengths. Our chemistry is positive; combined with our individual development, the team will become stronger and more cohesive as the season continues.

What are some of your goals for the season ahead?

We all want to help this team achieve a level of success that it has not experienced before. We want to record our best regular season, advance through the Big West Tournament and advance to the NCAA Tournament. Individually, I want to be better than I ever have before. I want to record more shutouts, more saves, more wins and record my best season ever at UC Davis.