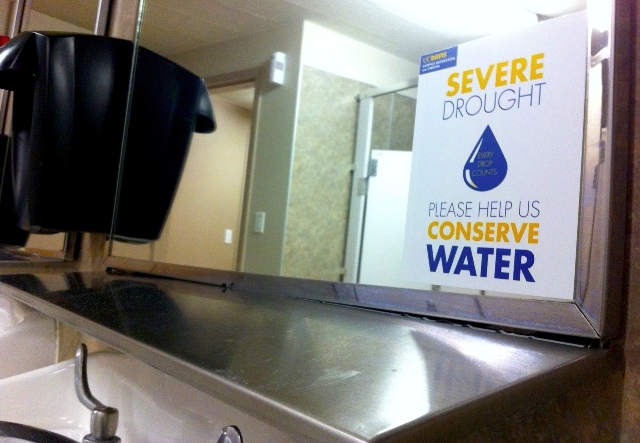 In January 2014, the California State Department of Water Resources announced a drought emergency for California. California Governor Jerry Brown called on the state to conserve water and created a goal for all Californians to reduce their water usage by 20 percent. This past April, in response to the drought emergency, UC Davis released its Drought Response Action Plan, which details UC Davis’ plan to reduce its water usage.

The Drought Response Action Plan includes reductions in water usage in dining services and landscape management, and seeks to make students more aware of the drought and ways that they can reduce their own water usage.

“Our campus communication office issued a news release, the sustainability office has written blog posts and added content about the plan to our website and Facebook, the Vice Chancellor of Administrative and Resource Management has emailed the whole campus and our utilities group has created a water dashboard for campus in partnership with some students,” said Camille Kirk, assistant director of sustainability at Office of Environmental Stewardship and Sustainability.

When members of Sustainable Resource Organization (SRO), a club focused on sustainability at UC Davis, heard about the Drought Action Response Plan, they wanted to become involved with helping the university implement water conservation practices on campus.

“As a sustainability-minded club, SRO is constantly looking for ways to educate fellow students and staff on environmentally conscious practices,” said Jordan Ramalingam, a third-year environmental policy analysis and planning major and the president of SRO. “We have found that the campus is already doing a tremendous job applying sustainable practices and policies in their respective fields.”

However, Ramalingam said that many students remain unaware of the environmental impact of UC Davis.

“The truth is that most students have no idea what our campus is doing to reduce their ecological footprint and therefore are very limited in their ability to get involved and play a role in these endeavors,” Ramalingam said. “SRO is trying to bridge the gap between students and staff and get students involved in intelligent projects that mutually benefit all the stakeholders on this campus.”

Ramalingam said that the California drought and the resulting Drought Action Response Plan is the perfect time for UC Davis students to increase their awareness of UC Davis’ environmental footprint.

“Virtually every student at Davis acknowledges that there is a drought in California right now, but few have any concept of how their actions affect it and what our campus is doing to meet it,” he said. “SRO held several meetings that highlighted ways to conserve water on a daily basis and [we did our] best to personalize this challenge and make it practical for other UCD students.”

UC Davis has been working with SRO to make others on campus more aware of the drought as well as more involved in water conservation. One integral part of this has been the new Save Water stickers, which are being put on the mirror of every bathroom of central campus buildings, as well as the bathrooms of some south and west campus buildings.

“The stickers are designed to raise awareness about reporting leaks,” Kirk said. “Our campus is really big (141 buildings on 900 acres just for the central campus) and one of the most helpful things people can do on campus to save water is to report leaks, broken irrigation and other water waste when they spot it.”

After a training session with the staff from Facilities Management, SRO helped put up the stickers in bathrooms during the beginning of fall quarter.

“In late September, the Sustainable Resource Organization (SRO), [myself], David, and Lupe Laguna at Facilities Management-Building Maintenance Services worked together to enable student teams from the SRO to hang the stickers on campus,” Kirk said. “It’s a great partnership, and the student teams are finishing up the sticker hanging…during the first part of Fall Quarter.”

Ramalingam hopes that many more people will now be aware of the need for water conservation around campus due to this sticker campaign.

“As the results come in, up to 100 buildings now contain these [stickers] in the bathrooms and [they] are seen by thousands of students [and] staff every day,” Ramalingam said.

Students and community members alike who wish to see how many gallons of water UC Davis has saved since January 2014 can visit the online “water dashboard” at wateroncampus.ucdavis.edu. This website, which tracks UC Davis’ monthly water usage as well as campus water demand, was created to track the university’s effectiveness at reducing water usage.

Kirk believes that there are simple ways for UC Davis students to become more aware of and involved in reducing water usage.

“Look for the Aggie Green Pledge program (#aggiegreenpledge) at a tabling event during UC Davis Farmers Market or the Wellness Carnival and take a water pledge,” Kirk said. “Report leaks; turn off faucets tightly and don’t run the water when you are lathering; [and] if you work in a lab, practice ‘green’ dishwashing techniques.”

According to David Phillips, director of utilities at UC Davis, the administration believes the project to have long-term positive ramifications.

“Our initial goals focused on short-term solutions, but we suspect that many of the outcomes will be long-lasting,” Phillips said.

The team is hopeful that UC Davis will reach its goal of reducing water usage as well as increase students’ awareness of environmental sustainability.

ASUCD state of emergency ends with 10-1 vote by senators