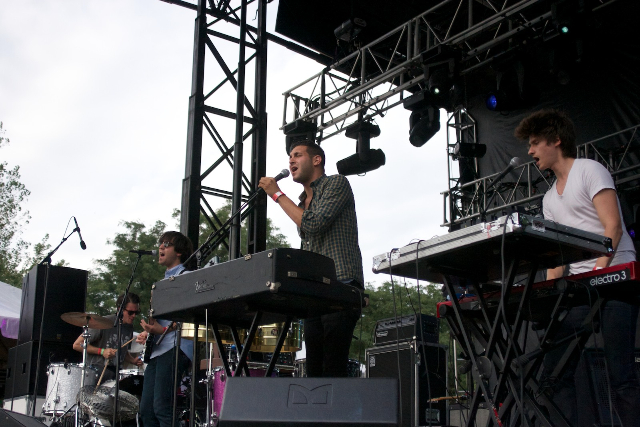 This Wednesday, the ASUCD Entertainment Council (EC) will be hosting a Holy Ghost! DJ set in the ARC Ballroom.

The EC has brought artists such as Muse and The Strokes to campus in the past, they were extremely successful. EC Director and fourth-year music and communication double major Alexis Munnelly believes that Holy Ghost! will make that same jump to fame.

“Our budget doesn’t allow for top 40 talent, so we seek up-and-coming talent that we believe will expand….We’re striving for variety [in the acts we bring to campus],” Munnelly said.

“Holy Ghost! is indie electronic. It’s a unique style that has become prevalent at Outside Lands and Coachella. It’s not rave style and not as hardcore as EDM.”

To keep costs down and the entertainment top notch, the EC keeps an ear to the ground of what types of music are becoming popular and reaches out to artists accordingly.

Physical promotions director and fourth-year chemistry major Megha Chandrashekhar compares Holy Ghost! to artists like Disclosure, but stresses that they bring a sound all their own.

“Holy Ghost! brings an indie, ‘70s [and] ’80s disco ball feel,”  Chandrashekhar said. “If you like dancing, you’re going to love their stuff.”

EC councilmembers have decided to host the concert inside of the ARC Ballroom for its cost efficient price, lighting capabilities and intimate space.

“The ballroom can hold 500 people, so I’m looking forward to it being a huge dance party,” Chandrashekhar said. “It’s a great opportunity for students to come out mid-week and listen to some great artists.”

Opening for Holy Ghost! is Shaun Slaughter of D.A.M.B. and GLSS. Slaughter recently performed at this year’s Sacramento TBD Fest. His music is described as a mix and sampling of styles from indie dance and rock, funk, disco and soul, house music, old time radio songs and ’90s tracks.

“It grew out of various music projects we’ve done together since high school. Unfortunately, Phil won’t be able to make it up for the show on Wednesday, so I’m playing alone,” Whitney said in an email interview. “Our music and DJ sets mostly feature house and techno but we’ve also been known to play music coming out of the darker side of the beat scene.”

As a UC Davis student himself, Whitney enjoys the opportunity to share his music with fellow students.

“We’ve played shows to college crowds before both here and at UCLA. The response from those kinds of shows is always amazing,” Whitney said. “I think [Holy Ghost! and GLSS will] complement each other well. Indie dance and house are intrinsically linked historically and sonically. As much as the sounds have diverged in the past, I think they are currently growing closer together. Right now there’s a lot of innovative music coming out of both camps with clear influence from the other.”

As for Wednesday, Whitney says he is eager to open for Holy Ghost!.

“As far as bands that occasionally play DJ sets go, I think Holy Ghost! are one of the few that actually get the form of a DJ set. It’s less about performance and more about curation,” Whitney said. “DJing is like giving a tour of a museum and less like actually creating the art. I believe that’s a very honest approach to the form and it’s an approach that I think we share with [Holy Ghost!].”

For students looking to become familiar with the music that will be played Wednesday night, all of the performing artists have releases available online from various websites and applications, including iTunes.

Tickets are $6 for UC Davis students (with valid ID) and $12 for non-students. The tickets are available online on Tuesday from 10 a.m. to noon at the EC table outside of the Memorial Union until they sell out. Doors open at 7 p.m. and the opening set begins at 7:30 p.m. This event, like all EC events, is drug and alcohol free.