Zombie John’s takes off in Davis 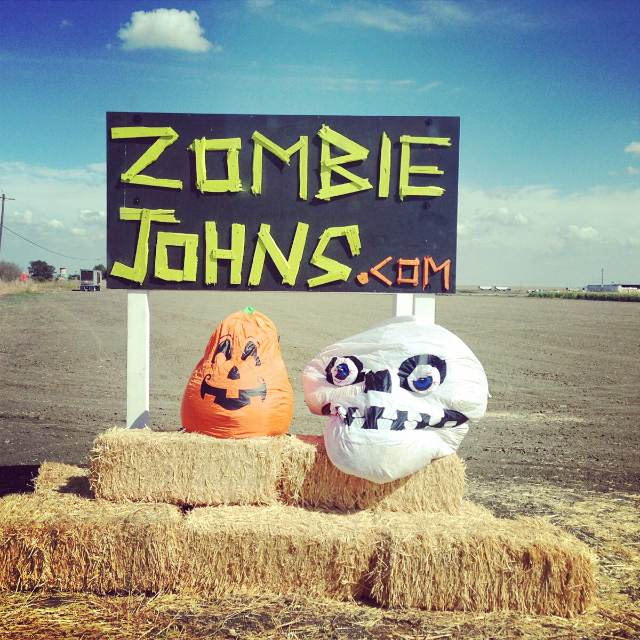 Halloween is rapidly approaching, and along with the promise of candy, pumpkin carving and politically incorrect costumes comes the opportunity to check out some local seasonal attractions.

Among these attractions is the brand new business, Zombie John’s, located straight off the Chiles road exit on Interstate 80 in Davis. The Zombie John’s experience includes a pumpkin patch and corn maze by day, and a zombie paintball thrill ride by night. In the ride, visitors are given ammunition and can shoot at zombie actors from halloween-themed trailers.

Zombie John’s only made it’s start this year, opening on Oct. 1 to the public. However, planning has been in the works since September of last year, when the operation’s Acting Manager Lana Maeder began to look into the idea of creating a Halloween attraction in Davis.

“I found out that there were no paintball zombie shoots in the area,” said Maeder. “My brother’s a farmer, and I said, ‘How come you haven’t made a pumpkin patch here?’ We put our heads together and we crazily embarked on this mission to bring fun, Halloween-themed entertainment to this area.”

While Maeder’s brother provided the land, he was one of many family members to contribute to the creation of Zombie John’s.

“The haunted maze is two acres, it takes a lot. From planting the corn, to irrigating it, to figuring out the maze patterns you’re going to do and hiring employees, it’s a huge undertaking,” Maeder said. “It’s really fun to get the family back together to work on a common goal.”

The whole process of planning, planting and organizing the attraction took about a year in total. Current assistant manager Karli Foster was present throughout the planning process.

“There was a lot of planning involved—a lot of close work with insurance agency, making blue prints for the maze, planting the corn and the pumpkin patch,” Foster said. “Our zombie trailers were actually handmade by John Anderson himself —who is Zombie John.”

According to zombie shoot tour guide Joe Schairer, who has worked with the attraction since its inception, Zombie John’s first month has been a success.

“[Our] first month’s been going great. I had no idea the community would be so far behind in an operation like this, especially right outside of Davis,” Schairer said. “It’s awesome to be able to provide a really fun, entertaining evening for the entire family.”

Since the attraction is so new, the participation and enthusiasm of the staff has been integral to the business, but Schairer said there has been no shortage of enthusiastic employees thus far.

And in turn, the staff agreed that the customers at Zombie John’s also bring enthusiasm to the table.