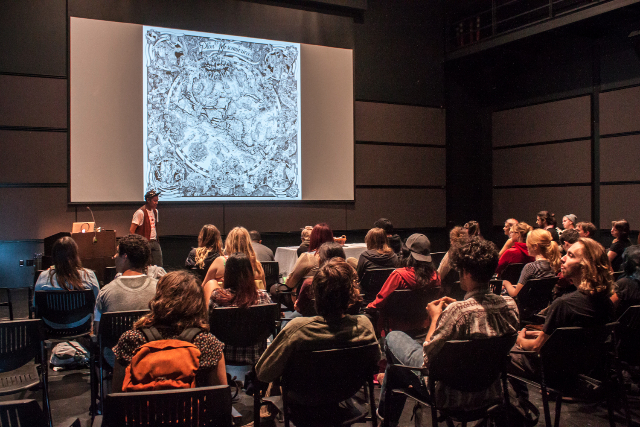 This Friday, a nonprofit activist group known as The Beehive Collective will be stopping in Davis to present their “Sucked Dry: Examining Drought and Privatization from Mesoamérica to California” tour.

“Sucked Dry” is an educational storytelling tour that uses design displays to promote water restoration efforts and demote monopoly on water resources by big businesses across the country. Beehive Collective has partnered with the organizations Restore the Delta and No on Prop. 1 in order to localize and authenticate their cause in northern California.

According to Ryan Camero, one of the Beehive Collective members, the activists use intricately layered fabric murals that depict social and environmental issues in different regions across the nation.

“We are drawing the connections between crises in Central America to what is going on currently in California — the claiming of limited water resources by corporate interests in what is historically the most severe drought our state has ever faced,” Camero wrote in an email.

The “Sucked Dry” tour will feature the group’s latest mural, called Mesoamérica Resiste! The mural depicts resistance to resource extraction in southern Mexico and Central America. With the help of 22 members – 13 of which were illustrators – the project took nine years to complete, and Camero said he believes this effort reflects the resilience of the activists.

According to the Beehive Collective website, the “stories in the [Mesoamérica Resiste!] graphic come from current struggles, but are also rooted in the legacies of over 500 years of colonialism in the Americas … We are in an era of extreme loss of cultural and ecological diversity and rapid climate change.”

The art on the mural is meant to symbolize a link between the struggles of past indigenous people against the colonial pursuit [and privatization] of natural North American resources and the privatization of water resources through the theoretical passing of bills like Prop. 1.

Shoshanna Howard, a campaigner for No on Prop. 1, said that she is passionate about protecting water from being privatized and is looking forward to the message being conveyed through art.

“Privatizing our water is basically giving our small amount of natural resources to big special interests businesses,” Howard said. “Beehive Collective looking at how water is becoming a commodity and less of a free and necessary resource for our lives.”

Howard said she hopes the “Sucked Dry” tour can relay the sentiment that water should be a free natural resource through its artist endeavors. Camero said he believes the design aspect of the tour will help to simplify and convey these sentiments.

“Design is a major component of making these graphic campaigns into reality by [creating] visual metaphors; breaking down complex political dynamics through images and connecting culture and ecology is vital.” Camero said.

“Sucked Dry” will take place at Woodstocks on 219 G St. The event is free for all and will start at 1 p.m.