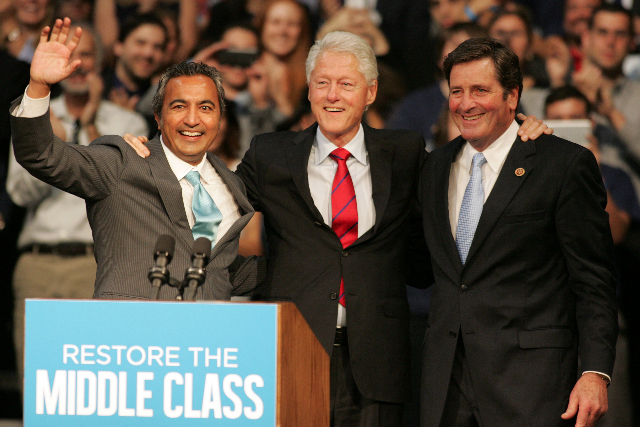 Bill Clinton, the 42nd President of the United States, spoke to UC Davis students and community members Wednesday morning at UC Davis’ ARC Pavilion, headlining a “Get Out the Vote” rally with representatives John Garamendi (CA-03) and Ami Bera (CA-07) in advance of the Nov. 4 election.

More than 4,500 people flocked to The Pavilion to see President Clinton, with lines stretching around the structure by 11 a.m., over an hour before doors opened. Tickets for the event were made available to the first-arriving students, who were able to stand in front of the speakers.

Clinton has appeared at UC Davis three times since 2002, most recently in 2012, when he helped campaign for Democratic congressional candidates Bera, Garamendi, Jerry McNerney and Jose Hernandez.

“I love this campus. I love California. I came here 29 times in my first term,” Clinton opened his speech today. “I think it’s important that all of you know why you should vote. This is America’s future. You’ve got diversity, intelligence, energy and youth.”

Before the rally, Bera spoke to media and acknowledged the importance of having President Clinton’s support in this race.

“[Clinton] reminds us of a time when we had a budget surplus, when people had optimism that if they worked hard enough they would move forward,” he said.

“They’re wrong — we are right about this,” he said of raising minimum wage.

Students invested in and indifferent to the upcoming election alike made a point to attend the rally.

“For me, I’m just curious to see an ex-president,” said Raul Girardello, an international graduate student from Brazil studying horticulture and agronomy. “I know he plays basketball [and] saxophone, and about Monica Lewinsky.”

Sarah Dyer, a fourth-year human development major, came to the event with her older sister and thought that Clinton’s appearance was important in increasing UC Davis’ national exposure.

“Some people aren’t aware of UC Davis, even though it’s a big school,”  Dyer said. “[This] gives it some political presence.”

During his speech, the former president expounded on the Clinton Family Foundation and its current work in Africa helping to treat areas and people affected by the Ebola crisis.

“The only thing that matters when you finish is if people are better off than when you started,” Clinton said.

Garamendi, in his discussion with media, stressed the importance of having President Clinton as a campaign and party resource.

“For everyone on the Democratic ticket, [Clinton] is our leader,” Garamendi said. “And [President of the United States Barack] Obama isn’t here in California, Clinton is, so we’re delighted. Absolutely delighted.”