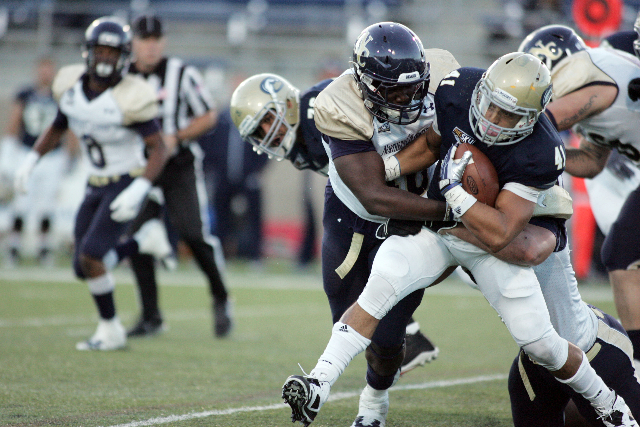 The Aggies failed to close out the game against Northern Colorado despite an opportunity to score late in the fourth quarter. After trailing by 17 points, the Aggies scored two touchdowns in the fourth quarter to cut the Bears’ lead to a field goal. The Aggies made a momentous comeback that almost ended in a game-winning touchdown with eight seconds left in regulation, stirring a crowd of Aggies fans that lay dormant for much of the first half.

Sophomore quarterback Ben Scott started for the third consecutive time and threw for 301 yards and two touchdowns with 25 complete passes out of 38 attempted.

Junior wide receiver Ramon Vargas scored both passing touchdowns. Scott found Vargas in the third quarter for a 23-yard touchdown pass, while his second touchdown came on an 18-yard pass from Scott halfway through the fourth quarters. Vargas led the receiving corps with 122 yards on nine receptions while adding the two touchdowns. Senior running back Gabe Manzanares led all runners with 50 yards rushing and contributed 53 receiving yards and a one-yard rushing touchdown with five minutes left in the fourth quarter.

After scoring two consecutive touchdowns in the fourth quarter, resulting in only a three-point deficit with 3:25 left, the Aggie defense made a key stop against the North Colorado offense. UC Davis started a drive on their own 22-yard line, but Northern Colorado’s Isaiah Williams caused a fumble that led to a 30-yard field goal by the Bears with one minute left in the game.

The Aggies responded with an eight play, 49-yard drive that ended with Scott’s only interception of the season at the Bears’ 14-yard line. After throwing for two incompletions, Scott attempted a pass in the Bears end zone, but Trevor Douglass was there for the interception with four seconds remaining.

“It was just miscommunication,” Scott said, regarding the interception. “We weren’t on the same page like we had been all night.”

“We weren’t ready to go in the first half, and I am in charge of that, and I take the responsibility,” said Aggie head coach Ron Gould. “But the guys fought to the bitter, bitter end and gave us a chance to win.”

UC Davis drops to 1-7 overall and 0-5 in the Big West conference. The Aggies will now embark on a two-game road trip that includes stops at Northern Arizona and Cal Poly.