The Theory of Everything makes a “Big Bang” into theaters 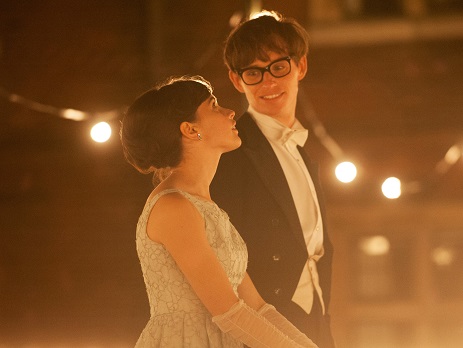 We are still unsure if the universe has an end, but human life does, so why not live it to the fullest? — at least that’s what physicist Stephen Hawking believes. Hawking is one of the most well-known scientists of our time and is particularly famous for his theories regarding black holes and their existence in space. It seems surreal that one man could ultimately imagine and put into accessible language the origins of the cosmos; Hawking not only did this, but accomplished these feats while battling the physical and emotional effects of a motor neuron disease called amyotrophic lateral sclerosis (ALS) for the last 51 years.

This past Friday The Theory of Everything — a biopic about Hawking’s personal life — premiered in theaters to a limited release. The  film, directed by James Marsh and written by Andrew McCarten, follows Hawking’s 30-year marriage to Jane Hawking and the hardships his diagnosis of ALS had on their relationship. Though the movie addresses Hawking’s scientific accomplishments, his critical work is more of a backdrop to the true aim of this film: to show audiences the reality and humanness of an extraordinary couple.

The movie is based off Jane Hawking’s autobiography, Travelling to Infinity: My Life with Stephen, in which she recounts her experiences dealing with Hawking’s fame, love and heartbreak. McCarten wanted to do justice to their story, so he spent eight years working on the screenplay adaptation with Jane before they thought it worthy of the big screen.

“I [didn’t] overdo the physics [aspect of the film] because I wanted to serve the ALS story — [Hawking’s] incredible battle with that disease and his and Jane’s refusal to let the disease silence him,” McCarten said. “But there’s [also] this incredible love story [in the film] — a one-of-a-kind love story that I don’t think has a precedent in most films. The elements [of their relationship] are just unlike anything else that I’ve covered.”

The movie stars Eddie Redmayne and Felicity Jones, who were given the challenge of portraying the physical and emotional complexities of the enduring couple. Upon being chosen for the roles, Redmayne said that though they felt privileged to play such amazing parts, he and Jones felt a responsibility to do this multifaceted love story justice.

Redmayne in particular faced the difficulties of acting out the bodily deterioration of an ALS patient and began studying the disease months in advance of shooting. He spent time at the Queen’s Square Neurology Clinic in London and worked with a specialist there who introduced him to people suffering from the ALS. He said that this allowed him to not only see the physical and emotional effects of the disease, but also the extraordinary humor and the amazing passion for life that many of the patients, like Hawking, had. Redmayne also had the opportunity to meet Hawking, and he said that their conversations greatly aided his portrayal of the physicist.

“The amazing thing about spending time with Stephen is he was only supposed to live to 21 [years old] and he describes every moment beyond that as a gift,” Redmayne said. “[Hawking] has managed to live every second of his life as passionately and fully as possible and he has been a great inspiration to me. We only have one shot at [life] and really trying to live [to the fullest] is what I’ve taken away [from this film].”

The Theory of Everything is currently on limited release in theaters across the nation, including the Embarcadero Center Cinemas in San Francisco. For more information on the film, please visit focusfeatures.com/the_theory_of_everything.