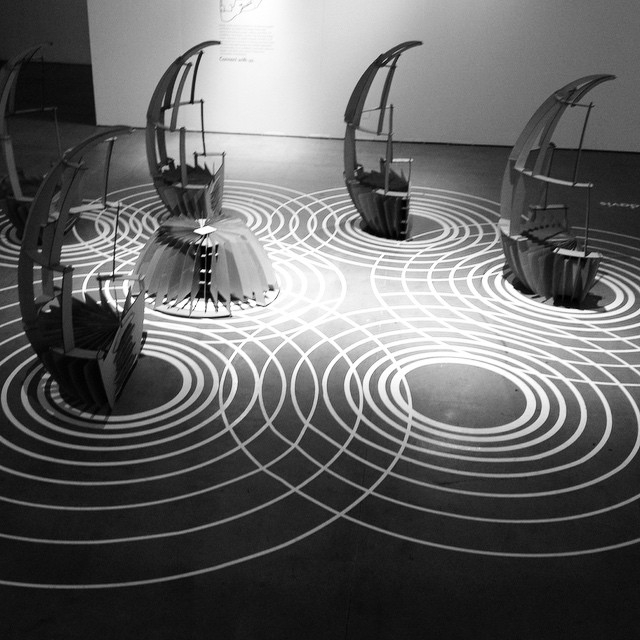 For many months now, the UC Davis Department of Design has collaborated on a project called ThinkDavis. ThinkDavis embodies the creative collaboration of design undergraduates and professors to build an installation for this year’s Sculpture, Objects, Functional Art and Design showcase in Chicago (SOFA Chicago).

Hosted every fall, SOFA Chicago is the premier art fair for 3D art and design. With this year’s exhibition running from Nov. 6 to 9, those who are part of ThinkDavis recently embarked to the Windy City to bring their work to life.

The final project comprised a constellation of luminescent chairs united by a translucent canopy. Underneath the chairs lay a map of fields of study that allow the UC Davis community to collectively thrive, such as the arts, design, engineering and social sciences. “Participating in SOFA Chicago was a chance to be both a part of a design community with other top design schools like Pratt and Illinois Institute of Technology, [and] also a chance to look closer at our own community,” Snyder said. “To this end, all of the chairs that we designed were created from cardboard material collected in [the Davis] community.”

The installation, constructed of free and donated cardboard, set a dynamic among SOFA Chicago’s cosmopolitan environment. Via email, students involved in ThinkDavis collaboratively said that the project was dynamically out of place, but in a positive way.

“We felt out of place, but in the end realized [that it was great], because it made our exhibition more provocative and meaningful,” the team said. “Sometimes it’s OK to be the odd one out!”

The students of ThinkDavis include eight UC Davis students of different ages and various majors. All members were able to put in their own personal touches for every facet of the project — ideation, prototypes, designs, media, etc. They expressed that ThinkDavis was a pivotal experience in their design careers.

“For the first time, we were able to see a tangible separation between what it means to be an artist, and what it means to be a designer,” the team said. “The mark of our effort is not necessarily in the physical form of the chairs, but in the processes and challenges that we faced designing, transporting and implementing [our ideas].”

Overall, SOFA Chicago was a successful expedition that connected Davis designers with their creative sides, with one another and with the greater design community. ThinkDavis garnered much positive feedback, strengthening the designers’ connection to their art even more.

As for future projects, Professor Snyder stated that he looks forward to new ways to strengthen the very themes that premised ThinkDavis.

“While it would be great to see the students develop our prototypes further, I’d be equally thrilled to see the ideas about sustainability and community engagement taken to the next level,” Snyder said.”