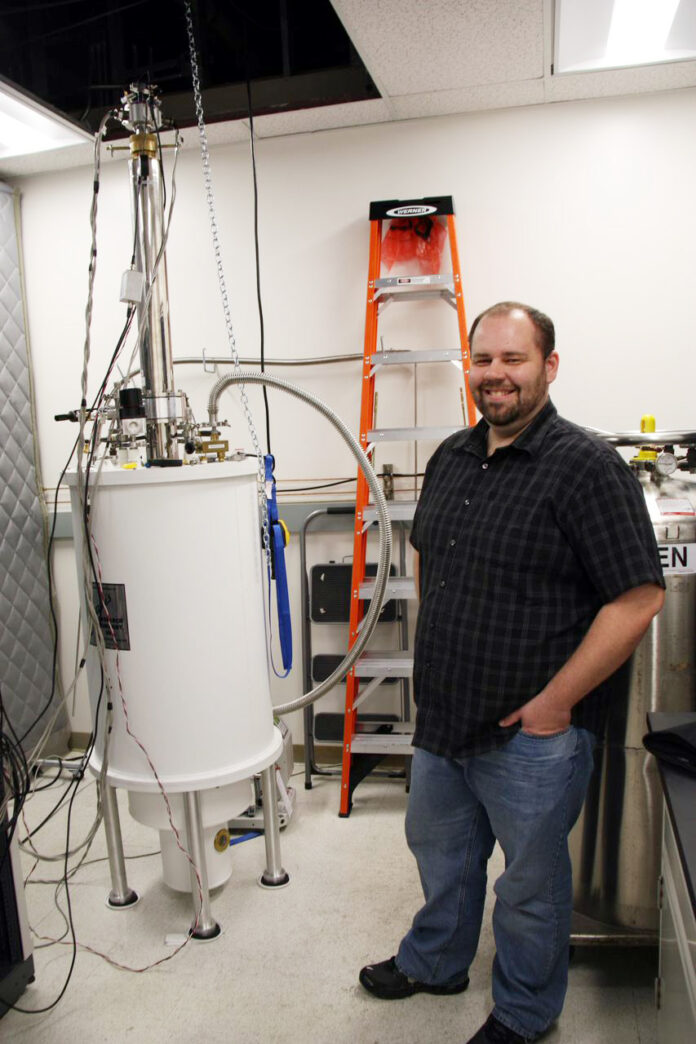 Josh Hihath is an assistant professor in the electrical and computer engineering department at UC Davis. He is beginning his fourth year teaching and conducting research on campus. Prior to his time in Davis, he was a research professor at Arizona State University.

Hihath teaches undergraduate and graduate level classes in electrical engineering, where students learn to describe the physical processes that control semiconductor devices like transistors and diodes. He has also started a graduate class on molecular electronics, which is directly related to his research.

Hihath’s research includes the study of single-molecule devices, determining the functionality and practicality of single-molecule transistors. He also explores the wider use of the method for singling out a molecule, including its use in the field of biology.

What in general do you do in your research?

We focus primarily on the electrical and energy conversion properties of molecular scale devices. Most of what we do is at the single-molecule level. We have this technique where we can make contact to just one molecule at a time, and then apply voltages to it and measure the current through it, so that we can study the charge transport and electronic properties of one molecule at a time. I would say the simplest idea would be, can you do something like make a transistor out of just one molecule, so, a device that has maybe 10 total atoms in it.

There’s this thing called Moore’s law, where transistors have been getting smaller and smaller now for five decades, and if you extrapolate that line all the way to the possible endpoint, it’s at sizes where there’s only a few atoms in the device. That’s where molecular electronics comes in. Trying to see if we can have molecules that operate as functional devices at this scale is one big part of what we’re trying to do in my lab.

What’s the significance of this research?

There’s multiple parts to it. One is what are the physical limitations of Moore’s law? You’ve been scaling down all this time, but are you actually going to be able to make a molecular device which operates as a transistor? Transistors are in practically every electronic piece of equipment which exists — cell phones, laptops; all these kinds of things have lots and lots of transistors in them. Can you make those kinds of systems out of single-molecules devices? This could potentially make them faster — as you get smaller and smaller, devices tend to get faster and faster. So you can potentially make circuits that are much faster if you can make accurate, molecular-scale devices.

At what point does it get too small to be practical?

That’s one of the questions we’re trying to answer. Obviously, you can’t get smaller than an atom. The smallest device that we’ve made that operates as a transistor probably has approximately 100 atoms in it in total. Intel makes transistors with gate-lengths as small as 200 atoms, but that’s only in one dimension. The entire transistor still has millions of atoms in it. Here, at the molecular scale, we’re talking about a device where the entire transistor is only 100 atoms.

What’s the purpose of making them smaller?

There’s multiple reasons we’re doing it, but I think the most straightforward [concept] to understand is this Moore’s law scaling. You can have something like a silicon wafer. Transistors are just electronic switches, but they’re the workhorse of everything that requires computation and even many electronic systems that don’t require computation. Transistors are really the workhorse of everything that is electronic. So if you make these smaller, it has two effects. One is you can fit more of them onto a wafer, so you can fit more devices per unit area, so you can make things smaller and that makes them cheaper. At the same time, because they’re smaller an electron takes less time to get from point A to point B, and that makes them faster.

The total physical limit of that is to have devices that are just a few atoms in size. That’s probably as small as you can possibly go. But the physics that we use to describe the way a transistor in a conventional silicon system is completely different than what you get if you only have a few atoms in the system. So, A) we’re trying to see if we can make transistors at that size scale, if so, what the physics are behind how they operate, and B) what are the device characteristics at that size scale, so how does it turn on/turn off, can we obtain current-voltage characteristics similar to conventional electronic devices?

Do you have any results that you can talk about?

The electronics is one side of it. We’re really trying to understand the underlying physics of how things operate at this size scale.

On the other hand, we have this technique where we can make contact with one molecule, which is pretty cool. Doing that, can we make contact to specific molecules to read out information about that molecule. Specifically, one of the things we’re trying to do is look at molecules like DNA and RNA and see if we can electrically read out biological information from a single DNA or RNA molecule.

We’ve actually done a few different things with that. We’ve shown that just changing one base in DNA changes its resistance, sometimes by as much as a factor of 10, so it can be a pretty large change in resistance by changing just one base in a sequence.

There’s also things that are big in biological circles these days, like epigenomics. The genome is basically defined as all of the genes that are in your body. The epigenome is all the genes that are active. For instance, if you have two “X” chromosomes, you’re going to have the same genes on both “X” chromosomes, but probably only one of those two is active. So the epigenome tells which one of those two is actually active. Nature has come up with a variety of ways of encoding that information, and one of the ways is they chemically modify some of the bases, they put an extra carbon on the cytosine bases. We recently did a study where we looked at the conductance of methylated and unmethylated DNAs and we can actually see a resistance change there, so it’s potentially a way we can read out things like what genes are active in a population.

How does the process work?

What we do is, for things like genes, we pick a sequence that we think is relevant and get it synthesized for us. Then we put a whole bunch of these in a solution and try to physically make contact with them, one at a time.

For creating the devices we start with one electrode that is pretty much atomically flat. Then, we make a second electrode that is movable and atomically sharp, so at the end of it there should only be one atom. Then we put a bunch of molecules in that have linkers that are capable of binding to gold on both ends. Then, basically, all we do is apply a voltage between the two electrodes and crush the sharp one into the flat one and pull away. As you do this, sometimes you bind a molecule and sometimes you don’t. By looking at the data, you can do statistics on thousands of these contact and withdraw cycles and say “this” particular molecule has “this” resistance value.”

So with something like DNA, we take DNA molecules that we’re interested in and we put them in this system and measure the resistance and can say “this sequence has a different resistance than this other sequence.”

How do you know that you are only getting one molecule?

This technique’s only been around for about ten years, and that was one of the big questions at the beginning. Was is it really a single molecule or is it not? We can determine this by looking for integer differences in resistance values from the experiments. If you have one molecule, you’ll get one value, if you have two molecules you’ll get double that value, and if you have three molecules you should get triple that value. If you zoom in on the histogram you can actually see peaks at one, two and three, so you know that you’re actually getting integer numbers of whatever it is you’re measuring the resistance of. So, you can actually statistically work out how many molecules there are between the electrodes for any particular device.

What are you trying to learn applying this to DNA?

One of the big ideas that has come from this work, is that we can use this kind of system as a sensor platform. Can we read out biological information from a single strand of DNA?  Can we obtain enough information to say whether a pathogen is present or not, or if a specific gene is active or not? So in effect this part of our work is moving from this idea that we can understand electrical properties and transport physics of single-molecule devices to the idea that can we do real applications based on single molecule electrical measurements. Right now, most biological studies are based on optical methods, so it’s sort of an emerging area to start to look at these things electrically.

What’s your day-to-day process for research?

As an assistant professor trying to start up a lab, I spend a lot of time writing grant proposals. I have a group right now of a couple postdocs and three PhD students. They’re the ones spending most of the time in lab doing the day-to-day hands on lab stuff. I spend a little bit of time in lab myself but not as much as I’d like to.

What are your hobbies?

I’m learning how to golf. And actually, because I don’t get to spend as much time in lab as I used to, a lot of my hobbies have become developing electrical devices and small equipment that we can actually end up using in lab.

The thing that I think gets a lot of people started in electrical engineering is being hobbyists and working on electrical systems. I still have that hobbyist mentality sometimes and I like to go make things like a non-linear current amplifier that may actually be useful in lab if we get it to work. When I was a kid I loved to take things apart and loved to build things, and that really started me as an electrical engineer. Now I get to do that kind of stuff on a much larger scale. Some of the equipment we use in lab is stuff I built.

One of the devices we use to do this works all the way down at liquid helium temperature, that’s 4 Kelvin. We bought part of the system, but a lot the system you can’t buy off the shelf, so we built it, and that’s kind of fun to do. It’s nice to get it up and running and then when you start publishing stuff out of something that you’ve built, or doing new science with something that you’ve engineered, it’s really fun.