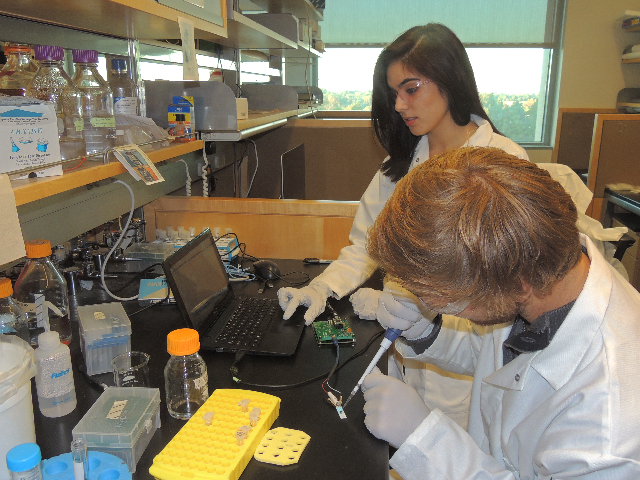 Picture 2: Sarah Ritz and Lucas Murray testing the quality of olive oil with their electrochemical biosensor

A team of UC Davis student inventors won the Grand Prize in the “overgraduate division” at the 2014 iGEM (International Genetically Engineered Machines) competition in Boston last week. The group developed an electrochemical biosensor that can measure the quality of olive oil.

70 percent of the olive oil sold in the United States is already rancid although labeled as fresh, according to a 2010 study by the UC Davis Olive Oil Center. The team sought to fix this problem.

“By consuming rancid olive oil, you’re not getting the health benefits and flavor that you paid for,” said Sarah Ritz, a fourth-year biochemistry and molecular biology major who was one of the six group members who spent her summer working on the biosensor.

“We presented in the second day of the competition and I think we did pretty well. We had a good presentation and the judges were happy, but we had no idea we [were] going to win anything,” said Lucas Murray, a fourth-year biomedical engineering major.

On Nov. 3, the UC Davis team was awarded the highest prize in its section, as well as the Best Policy and Practices Advanced Presentation Award.

“I am very happy for them; this is a great result for our campus” said Marc T. Facciotti, an associate professor and one of the student advisors for the UC Davis team. “It’s the sixth year I’m advising iGEM student teams, and this is the best project we’ve ever had.”

The students managed to develop a quick and inexpensive method to ensure product quality for producers, distributors, retailers and consumers of olive oil, called OilView. At the beginning of the project, the team spoke to researchers from the UC Davis Olive Oil Center and quality control experts at olive oil mills, finding out that a certain group of chemicals, aldehydes, changes when olive oil becomes rancid.

“So we built an enzyme-based electrochemical biosensor, which can test for different levels of aldehydes in olive oil,” explained team member Cohen.

The team not only developed the device itself, but also accompanying software, which helps quantify the degree of rancidity found in the solution.

Their invention is highly relevant to the olive oil industry. The team said that consumers are willing to pay more for fresh, extra-virgin olive oil, since its fatty acids and antioxidants are known for providing health benefits, such as a reduced risk of heart disease or cancer. But when olive oil oxidizes over time, or is exposed to too much light, heat or air, it loses its characteristic fruity flavor and beneficial effects.

Lower-grade olive oils are produced by using heat or solvents to extract the oil, and therefore do not contain the healthful components of naturally crushed olives used for extra-virgin olive oil. Since olive oil standards are voluntary, imported olive oil is often mislabeled and leads consumers to unknowingly buying a low-quality product.

The iGEM award and the overall positive reactions to the team’s innovation motivated the UC Davis team to further improve their device, making it available for retail in the future.

“Attending a conference like iGEM and meeting so many other bright, talented students with fantastic projects was really inspiring,” said Song, who supported the UC Davis iGEM team as a “shadow member,” and hopes to be a full member next year. “It is incredible to see what students can achieve.”