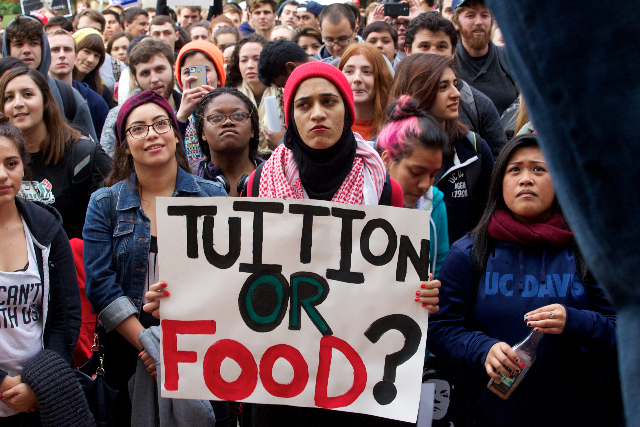 Three years to the day of the infamous pepper spray incident involving campus police and student demonstrators, UC Davis students once again filled the Quad this afternoon to protest, this time in response to impending tuition hikes.

An estimated 500-600 students, faculty and community members convened in the center of the Quad at noon, Nov. 18, to make speeches, develop signs and mobilize the crowd to march across campus in protest of University of California (UC) President Janet Napolitano’s proposed UC tuition plan, which would increase UC tuition by up to five percent annually over the next five years.

The UC Board of Regents will vote tomorrow, Nov. 19, at its meeting on the UCSF Mission Bay campus, on whether or not to implement the tuition plan. UC officials hope that the plan will pressure California state legislators and Gov. Jerry Brown to increase UC funding.

After briefly pausing in front of Mrak, the group of protesters occupied the building, where, hours later, protesters who remained in the building spoke with Katehi and other members of the administration.

“Students are upset, obviously, with the state for a very good reason, so we were here just in case they wanted to have a discussion with us,” Katehi said. “It’s important for the students to show their disappointment with the underfunding of the UC, which eventually is forcing the university to raise tuition.”

“These are public servants. These are not market forces we are negotiating with,” Litzelman said to the crowd. “The University of California should not be thinking it needs to compete with corporations who overly pay their top administrators and corporate executives. It does not mean that you can charge your students more and bankrupt the generation that’s going to pay for your ass.”

Many ASUCD officials attended the event, including ASUCD President Armando Figueroa and ASUCD senator Mariah Watson, who both spoke at the rally.

Figueroa strongly criticized the Board of Regents for not heeding student opinion and for representing politicians instead of students.

“We are here on this quad time and time again, while UC administration and UC regents wait out our four-year terms,” Figueroa said. “We’re here, and we have these conversations about accessibility to the university and then four years later we’re here protesting again. Why is that? We can no longer be the apathetic generation we’re taught to be. These millionaires and billionaires serving 12-year terms because the campaigned for Jerry Brown don’t represent us.”

Similarly, Watson, who is African-American, spoke passionately about the struggle that she, her constituency and all students regardless of ethnic background must face in order to fund their educations.

“I am a black woman of color, and I deserve to be at this university,” Watson said. “I am sick and f*cking tired of pamphlets saying ‘We want you here,’ ‘We want you in the classrooms,’ ‘We want you furthering your education,’ but we want to raise our tuition to the point where retention rates are 29 percent for African-American females within four years.”

As protesters swarmed through Mrak Hall, Lang said that he fully supported the demonstrators’ initiative.

“It means that students are really concerned about the increase in tuition and the impact it’s going to have on their ability to continue their education,” Lang said. “I think it’s important that we help the regents and the [UC] Office of the President understand our students’ concerns and help deliver that message.”

A group of about 20 students spent the night of Nov. 18 in Mrak Hall.

UC Davis students plan to protest tomorrow’s Board of Regents meeting at 8 a.m. as well.

Watson may have best encaptured the spirit of the protests when she ended her speech at the rally with a simple message: “Raise tuition, and we’ll raise hell.”

Scott Dresser is The Aggie’s Campus News Editor and can be reached at campus@theaggie.org.