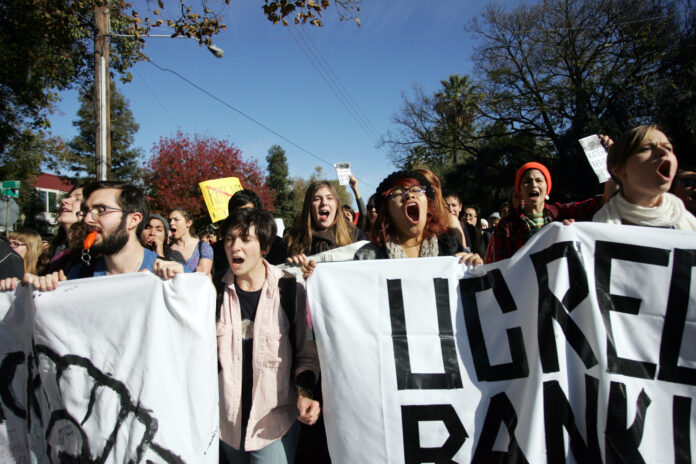 On Nov. 24 at noon, hundreds of UC Davis students and community members gathered on the Quad and staged a march through Downtown Davis as a part of the “UC/CSU/CC Statewide Call for Action” protest regarding the UC Regents’ decision to increase UC tuition by five percent annually over the next five years. Last week, before the Regents voted, demonstrators marched through campus in protest of the tuition plan and occupied Mrak Hall—the main administration office building.

“Last week it was really powerful getting everyone together and having our voices heard. Today’s another day to have our voices heard,” said third-year anthropology major Sky Johnson. “This one, more than last week, is our protest. We don’t want to hear from the chancellor and the UC Regents. This is us saying ‘we matter and our voices matter.'”

In light of UC Regent and Bank of America Board Member Monica Lozano voting in favor of the tuition hikes at the UC Regents meeting last week, protesters occupied the Bank of America office located on E Street during today’s march. At press time, students were currently occupying Olson Hall on the UC Davis campus and planned to continue the occupation for the rest of the day.

“I just think that our students are really frustrated with this whole notion of a tuition increase. Them having an opportunity to exercise their free speech right is something that the administration here truly believes in,” said Associate Vice Chancellor of Student Affairs Milton Lang. “We are at a time where the state should invest, reinvest in higher education so that we are not put in a position where we can’t sustain the level of service for students. Now that the state is in a better shape financially, its time for the governor to step up and support higher education so that we don’t have to raise tuition.”

After reaching Olson Hall, students chanted “leave our space, leave our space” repeatedly towards Lang and other university administrators.

“I think that this is their space, but its our space as well,” Lang said. “That’s why we decided not to leave, because we are here supporting our students and we understand their frustration. Sometimes it gets pointed in different directions, so we understand that.”

Ritika Iyer and Sydney Cohen can be reached at campus@theaggie.org.