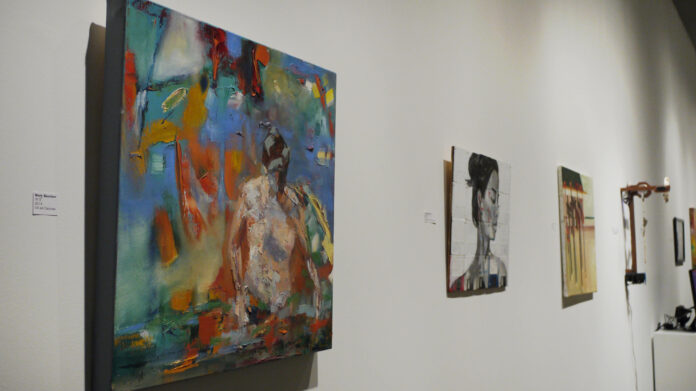 For Lauren Traetto, numbers are much more than just figures. Nine is an older and reasonable number. Seven is red and a youthful boy. Six is his bossy little sister who has an illusion that she will be hurt and one is a small boy who always does the right thing.

Traetto has synesthesia, a rare neurological condition in which two or more senses are intermingled such that the simulation of one sensory pathway leads to involuntary experiences through another sensory pathway. Synesthesia can manifest itself in a variety of ways, from words being associated with colors, to being able to smell music.

On Saturday, the Davis Art Salon featured two dozen professional and student artists who tried to capture the sensation of this sensory phenomenon in their artworks, showcasing a variety of pieces from electronics to oil paintings at the UC Davis Nelson Gallery.

In addition to the art, Traetto presented her experiences with synesthesia at the event alongside UC Berkeley psychology graduate student Bryan Alvarez, who discussed his research on the rare cognitive condition. Around 200 art enthusiasts, including UC Davis students and residents from the greater Davis community attended the art show. Artists were allowed two minutes to present and explain their pieces during the event – an unusual practice in art shows.

“I really enjoy listening to various artists talk about their work,” said Davis resident Susan Gishi, who went to the event to support her friend who was exhibiting. “It adds so much more to the show.”

Attendants of this free event were encouraged to vote for their favourite piece. The winner of the show, UC Davis student Rachael Richards, won a two-week solo show at the Nelson Gallery showcasing other similar works alongside the winning piece.

Richards’s winning piece, an untitled sculpture featuring an intricate, fluid web of aluminium wires, will be exhibited in the first week of December.

The Davis Art Salon, presented by the Nelson Gallery in conjunction with the UC Davis Art History Club, premiered last Winter Quarter, in hopes of countering the traditional art exhibition format. It’s main goal is to involve the collaborative effort of the community, reflected by the theme of their first art show: “Vive Le Public,” meaning “long live the public” in French.

Preparation for the event started prior to the beginning of this school year. The nine regular members in the Art History Club voted for a proposed theme. Submission of up to three artworks each was opened up to any member of the Davis, Sacramento, or surrounding local communities for one month. All members of the club voted again to select the top pieces to put in the show.

“The special thing about this show is that there is no application fee to join,” Dor said. “It’s a good way to involve the Davis art community.”

Receiving around 40 entries for the show, this year’s event exhibited 23 pieces, compared to just 15 pieces in the previous shows.

“I was a little surprised in the diversity in age with the various artists,” Gishi said. “I guess I came in under the assumption that it would be mostly the artists associated with the university. I like that there is new blood coming in.” For attendants, the art show not only binds the local artist community together, but also stirs up discussion about art.

“I think [the show] brings together people who have a common interest,” said first-year Environmental Policy, Analysis and Planning major and art show attendee Maia Moran. “It’s a good way to get the art scene exposed and get people exposed to the art scene.”

Sacramento resident Patricia Brosnan, who attended the show to support her daughter, a participating artist, thinks the artworks show a glimpse into the creators’ thoughts and emotions, which adds to a meaningful discussion of art.

“When people get together to talk about [art], it really brings a whole new meaning to it, to the artists and to the people looking,” she said.

The next Davis Art Salon will be hosted at the Nelson Gallery in February. Art submissions for the show will be accepted in January.