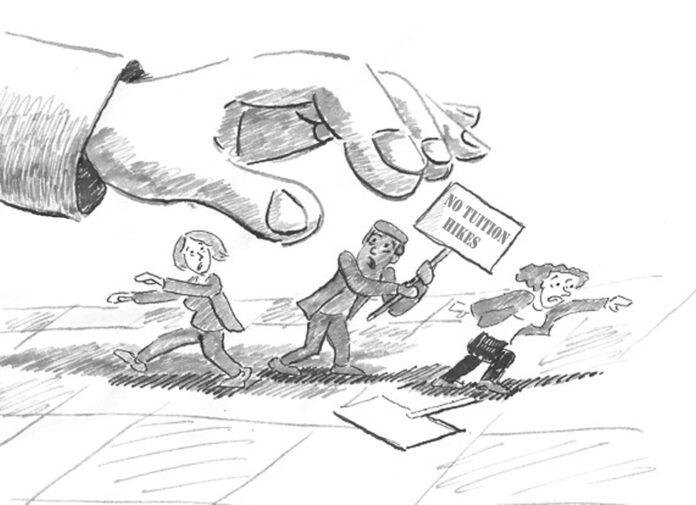 Beginning Nov. 18, the campus has once again erupted in protest. Exactly three years removed from the infamous pepper spray incident that marred the relationship between UC Davis students and administration. Most recently, the focus lies on the decision by the University of California administration to pass a proposed tuition increase over the next five years.

This tuition hike is the result of a struggle between the UC Board of Regents and the California State Government. The UC Regents, led by UC President Janet Napolitano, are well aware of the state’s low funding of the UC system. Napolitano and her council, while not explicitly saying so, determined that the best option for forcing the state into action was raising tuition and creating an uproar among the UC community. For these reasons, the UC Regents have decided to stop resorting to temporary solutions and take a stance.

Brown, meanwhile, established his reputation as an influential governor by making difficult choices and righting the California budget after years of mistreatment. The governor and his staff claim to have been blindsided by the tuition hike, feeling that there are other cost-cutting measures that have been left unexplored. In their opinion, it is not an issue of lack of funds but rather a misappropriation of where UC funding goes.

These two arguments, however, are petty exercises in the blame-game. The focus of complaints, instead, must be on the decision by both organizations to force students to once again shoulder an increasingly heavy load that should be put elsewhere. The UC system and the California government must stop abusing those who are most easily victimized. For years, students have been forced to bear the brunt of squabbling and poor decision-making by these two parties. Tuition for the 2001-02 school year was $3,429. Since then, it has almost quadrupled and could be as high as $15,564 by 2019-20 under the newly passed proposal.

This new plan uses UC students as pawns in a much larger game of leverage, something that cannot continue to happen. The governor must begin to prioritize higher education in the budgeting process, an ideal that was abandoned long ago. Likewise, the UC system needs to start making some difficult choices that do not involve increasing the burden on students. Most of all, each party needs to begin to do its job better without making it more difficult for students to get a quality education by, for example, allocating funds more appropriately. By job description, the UC Regents are supposed to “serve as trustees for the people of the State of California.” Right now, they are failing current and future generations of California students by seriously indebting those in pursuit of an education.

Meanwhile, we commend UC Davis students for taking an active stance against this injustice. As students, we have to work much harder to exercise our collective voice, compared to the UC Board of Regents and California government. The protests and sit-ins over the past week have done a great job forcing the student voice into a debate that has otherwise ignored and victimized it. The California Aggie Editorial Board encourages students to continue peacefully protesting the new tuition hike. Even further, we recommend that all students engage our university administration in a healthy, continuous dialogue so that university administrators and our state government are held accountable for acting on our behalf.