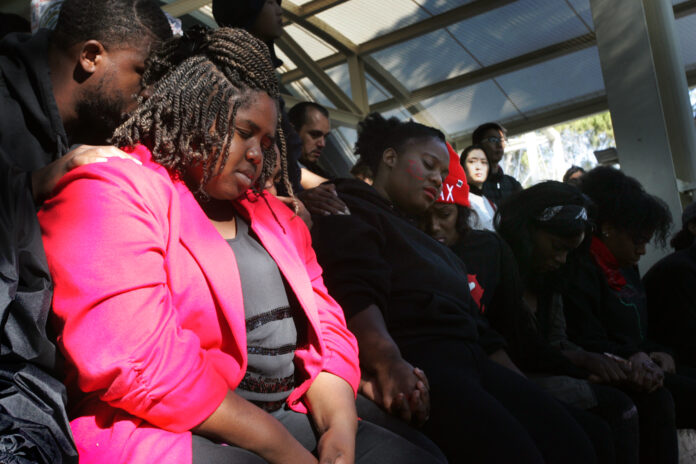 At 12:00 p.m. on Nov. 25, a few hundred students gathered next to the Coffee House (CoHo) to protest a grand jury’s decision not to indict Officer Darren Wilson yesterday. Wilson, a police officer in Ferguson, Missouri, fatally shot Michael Brown, an unarmed 18-year-old black man, in August, sparking mass protests in Ferguson and throughout the country.

The 12-person grand jury began deliberating in August before releasing its verdict yesterday, Nov. 24. Following the verdict, demonstrations and protests broke out across the nation, including large ones in Los Angeles and Oakland.

At UC Davis today, students of all ethnicities began filling up the walkway between the CoHo and the Quad close to noon. Protesters, some crying and some holding posters reading “Black Lives Matter” and “How many does it take?”, outlined their bodies on the ground in chalk and chanted “Holler back! I got your back!”

Next, protest leaders, including ASUCD senator Mariah Watson, led the crowd in singing the “Life Every Voice and Sing” and “Lean on Me.”

Ed Muo, a fourth-year biochemistry and molecular biology major, read an excerpt from Dr. Martin Luther King, Jr.’s 1963 “I Have a Dream” speech. He called for people to wear black this Friday and to not spend money on “Black Friday” to illuminate the power of the “black dollar.”

“It’s a human rights issue,” Muo said. “Do not be oblivious to what’s around you.”

Tia Williams, a second-year human development major, acknowledged the African-American men in the crowd and addressed them with a powerful message of warning: “It’s open season on your lives.”

Follow The Aggie online for more updates regarding future protests.