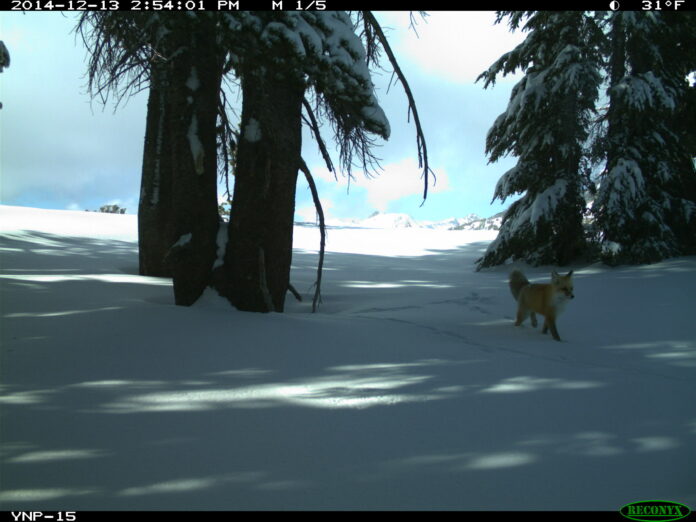 The Sierra Nevada red fox, a state endangered species, was documented for the first time in a century inside the boundaries of Yosemite National Park. A motion sensitive camera captured the sighting on Dec. 13, 2014 and Jan. 4, 2015 in a northern region of the park.

The last documentation of the species was in 1915, almost a century before these two sightings. Park officials have yet to confirm if the same fox was sighted twice or if it was two different foxes.

According to Ben Sacks, a professor at the UC Davis Veterinary Genetics Laboratory, there are estimated to be fewer than 50 Sierra Nevada Red foxes in California. Although the species’ biological status is not entirely known, it is listed in the California Department of Fish and Wildlife as endangered on the state level. There is currently a petition to include the fox in the Endangered Species Act and declare it as endangered on a federal level. The petition is currently under review and the decision is expected to come later this year.

“Four years ago, we all thought that red foxes [had] been extirpated from that entire region. The forest service got the photo of the red fox around 10 miles north of Yosemite, and we have been monitoring ever since. We assumed that they are probably in the park, but we have not surveyed in the park’s boundaries,” Sacks said. “At this point, [the limiting factors are] unknown. There are many hypotheses, but no evidence that put one over another… We don’t have a lot of historical baseline information,” Quinn said.

According to Sacks, those hypotheses include the common practice of trapping the foxes in the early 20th century, cattle grazing and impact from change in forestry practices.

“All of these things can potentially affect [the population]. Changes in forestry practices could have increased habitat for coyotes, which is a larger competitor of the red fox. That could’ve contributed to the decrease in their numbers. And of course, climate change …[can] reduce the amount of the snow in the Alpine zone,” Sacks said.

According to Sacks, the fox tends to be found in the sub-Alpine zones of both the Sierra Nevada and the Southern Cascade mountains, and their elevation depends on latitude. Near Yosemite National Park, the fox is found at a latitude of 10,000 feet. Officials at the national park are not currently disclosing the exact location of the recent fox sightings to protect the species.

Yosemite National Park is committed to contribute to any restoration effort by conserving the natural habitat of the species.

“We basically leave everything in its natural state. We strive not to have an impact on the resources, and we strive to increase the population of things such as the red fox through the natural conservation of the park itself. We conserve the natural resources [and] we provide adequate habitat for the red fox to essentially survive in,” Cobb said.

The motion camera, which captured footage of the fox, is one of the many cameras installed in the park for a study funded by the Yosemite Conservancy. Those involved in the study also installed a “hair-sample trap” near the cameras. The trap is meant to collect hair samples, as the name suggests, and is a fence made of barbed wire. Researchers later conduct DNA analysis on the samples. The nonprofit organization has funded other studies conducted in the park.

Scientists and officials hope that the sighting of the fox can bring awareness and, consequently, funding for more studies on the species.

“We hope this will bring some attention to the park’s species, and hopefully some funding…so that we can learn more about what factors are limiting the species both in and outside the park,” Sacks said.