Off the Court, On the Record 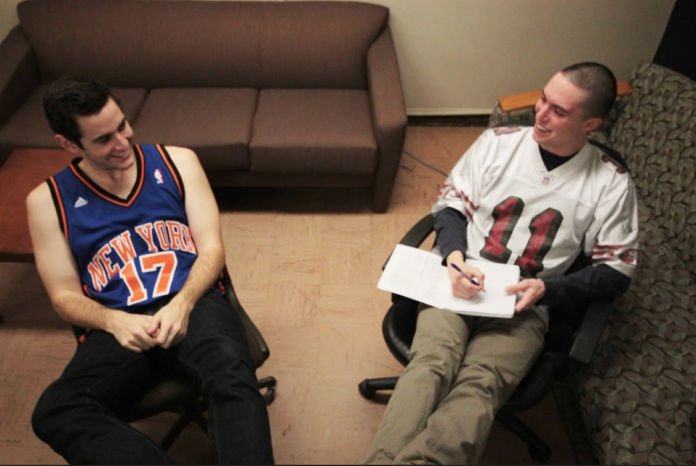 A sports podcast recorded by Ryan Reed and Scott Dresser

Welcome to Off the Court, On the Record, the sports-focused podcast for The Centennial Magazine! We covered a number of topics this week and will give you a brief overview of what we went through.

The Aggies have started the season on a spectacular roll, currently holding first place in the Big West while winning four out of their first five games. A lot of the success comes from senior guard Corey Hawkins, who has consistently been in the top-10 nationally in points scored per game this year while shooting around 50 percent from three. He was also named the 25th best collegiate player by ESPN’s John Gasaway in an article earlier this year.

Hawkins has been a huge part of the men’s basketball team’s rejuvenation, a year after the team finished in last place in the Big West Conference. Still, it has not been a one-man show from the Aggies, as the team is benefiting from four big men who either did not play or barely played a year ago.

The Aggies’ formidable frontcourt is made up of senior forward Josh Ritchart and junior forward J.T. Adenrele, who both sat out most of last year with injuries, and junior transfers  Josh Fox and Neil Monson. Ritchart, who is averaging almost 11 points and 4.2 rebounds per game, has been at the forefront of the big man resurgence. Still, the team does not seem to be running a lot of plays for Ritchart, who has turned into a glorified spot-up shooter, despite having a far wider skill set. The Aggies could benefit from going to Ritchart more in the post, especially when Hawkins is on the bench. UC Davis has solid game-managing point guards, but the offense sputters when its leading scorer sits.

Corey Hawkins, for all of his greatness at this level, does not seem to have much of a future playing in the NBA. He is not quite a point guard; he often turns the ball over and he is too small to play shooting guard. While there are a few NBA players his size, they are generally either firecracker scorers who can play some point guard or defensive bullies. Hawkins doesn’t seem to have either in him quite yet, although he does have stretches of games when he absolutely takes over offensively for the Aggies.

There is a chance, however, and that may be based on comparisons with his father, Hersey Hawkins who was drafted sixth overall in the 1988 NBA Draft by the Los Angeles Clippers. Hersey was a 6’3” shooting guard, like Corey, and averaged over 35 points per game in his senior year of college. He also now works in NBA player development, so that may help. The league is simply different now, however, and Corey is finishing at a time when people are bigger, stronger and faster.

With the basketball team playing so well after finishing last in its league in 2014, many UC Davis fans wonder whether the football team will go through a similar transformation. The answer to that question would have to be “maybe.” The Aggies did benefit greatly from sophomore quarterback Ben Scott’s move to the starting lineup, something that did not happen until midway through the season. On the other hand, the Aggies will lose senior running back Gabe Manzanares, who has been fantastic over the past two seasons.

The real issue is whether the Aggies will be able to overcome a poor passing defense, especially since Ron Gould has made it seem as if they are simply hoping to get improved production out of their current players. Defensive backs were continually in the right position but were beaten to the ball by receivers that they were covering. The one team that the Aggies were able to upset, Cal Poly, was a ground-and-pound team, and UC Davis really struggled against any team that could throw.

The Bay Area’s two NFL teams both recently went through major coaching transitions, with the 49ers departing from Jim Harbaugh in favor of defensive line coach Jim Tomsula and the Raiders hiring proven Jack Del Rio as head coach after another disappointing season. The 49ers situation is a little puzzling; Harbaugh went 49-22 in four seasons with the Niners, taking the team to three NFC Championship games and one Super Bowl, essentially taking the team out of two decades of mediocrity and transforming it into a perennial Super Bowl contender. However, Harbaugh reportedly had a strained relationship with ego-centric owner Jed York, leading to the departure of the successful coach after a disappointing 8-8 season. Emotions aside, it seems unfathomable and somewhat ridiculous that any team would rather have the unproven Tomsula over Harbaugh. If it ain’t broke, don’t fix it. It seems as though the franchise is falling exponentially away from its recent success.

Amazingly, there seems to be more optimism across the bay in Oakland, where the Raiders, who haven’t had a winning season in over a decade, have the opportunity to build on a solid rookie season from quarterback Derek Carr. Del Rio has local ties, as he grew up in Hayward, and has the experience and proven track-record, most recently as the Denver Broncos’ defensive coordinator, to turn the franchise around.

The Sacramento Kings also went through a significant coaching change earlier in the year, firing head coach Mike Malone while promoting Tyrone Corbin. The Kings got out to a great start under Malone but then struggled as their star center Demarcus Cousins went out with viral meningitis. Malone was fired under the pretenses of poor coaching, but it seems that there was far more at play with the decision of ownership. The move has widely been considered to be a headscratcher among people who follow and report on the league. The team has struggled since his firing, and Cousins has returned to his temper-tantrum throwing ways.

Only a few hours down the road, the Golden State Warriors are absolutely dominating the NBA, perhaps the best team in the league. Klay Thompson just put up a record 37 points in a quarter this month and the backcourt of him and Stephen Curry is the best in the league. The Warriors also bring two former all-stars, David Lee and Andre Iguodala, off of the bench with a few other solid rotation players. After years of struggling, it seems that the right combination of coaching, players and front office moves have made them a powerhouse.

Speaking of Cousins, the All-Star game is coming up and the Kings center is one of the more confusing decisions. He is one of the most dominant offensive players in the NBA, but struggles defensively and is helming a pretty bad team. It’ll be interesting to see, especially with the loaded Western Conference, who ends up making it. The Aggie will jokingly nominate Jeremy Lin and Ryan’s favorite player, Carlos Boozer, of the Los Angeles Lakers for the game.

The Lakers are struggling now, perhaps for the first time in the memory of current college students. Kobe Bryant just opted for season ending surgery, they lost first round pick Julius Randle at the beginning of the season, and the team is now relying on players to start who would generally be sitting on the bench for other teams. It is sad to see a career like Bryant’s end in the way that it is, but this year seems to be a lost year for the team.

That wraps up the podcast, thank you for reading and listening to our first edition and stay tuned for next month’s! Please email us at sports@theaggie.org if you have any questions or comments.

More than a year after the start of the pandemic, local businesses continue to adapt