Disorder in newborn foals may give clues to autism 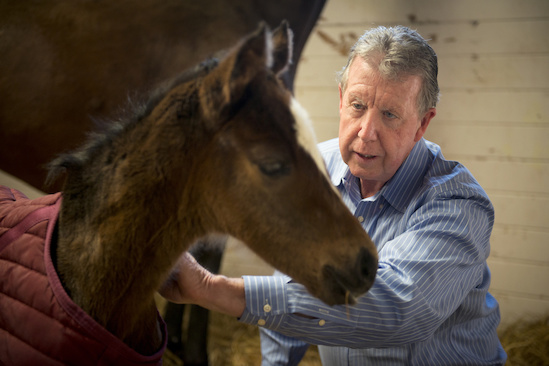 Veterinary researchers at UC Davis are studying a well-known disorder in newborn foals that can possibly lead to connections and similarities in children with autism.

Known as neonatal maladjustment syndrome, the disorder is commonly found in newborn foals exhibiting abnormal behaviors, including not recognizing their mothers, wandering away from the closeness of mares and being disoriented in their environment. The syndrome has often been attributed to hypoxia, or lack of oxygen, during the birthing process. However, researchers are currently focusing on the effect of neurosteroids on foals.

These neurosteroids act as a sedative for unborn foals and are important in keeping foals calm before birth. There is a biochemical switch that must be activated in order for a foal to recognize the mare, start nursing and become mobile.

The research team consists of molecular biological sciences professor Isaac Pessah, UC Davis Veterinary Medicine associate professor and neurologist Monica Aleman and Madigan. The group believes that the physical pressure of the birthing process is an important signal that tells the foal to stop producing neurosteroids, therefore allowing it to wake up.

Treatments for foals with the disorder include tube feeding and thermal regulation. Third-year animal science major Katherine Griffin recently nursed a foal with neonatal maladjustment syndrome that she helped deliver.

Griffin started working at Victory Rose Thoroughbreds in Vacaville, Calif., during her first year at UC Davis, and is currently involved with foaling mares and breeding. From her experiences, Griffin has seen firsthand what the horses can do in terms of the medical responses between two different species and is not surprised by what she has seen.

“The equine species has so much to offer,” Griffin said. “Not only can they specifically help people with the disorder, but now they’re giving us research information about [it]. It’s amazing to me.”

In addition, a newer technique to address the syndrome recently developed from a study looking at a phenomenon where foals “flop” and go to sleep.

“[It’s] where when you a hold a newborn foal within the first few days of life,” Madigan said. “If you hold them to do a procedure, they tend to flop, they tend to drop their head, go to sleep, collapse.”

The technique is a squeezing system with soft ropes across the foal’s chest and it mimics the pressure and feeling of what foals experience during labor and passage through the birth canal. The researchers discovered that there were hormonal changes in the blood after being squeezed for 20 minutes.

There is also evidence that palpable pressure is also important for infants because there have been reports where sick newborn babies make miraculous recoveries after being placed in the arms of parents. This is a concept called kangaroo care, which is similar to the squeeze procedure.

“You give infants to their mother [and] there’s this dramatic change in how the infant behaves,” Madigan said. “Their nursing is better, their behavioral response are better [and] their blood pressure is better.”

Madigan said that what is learned in one species can be applied to another, specifically citing the One Health concept. This implies the fact that veterinary health and human health are similar.

To further this idea, the research team is working with UC Davis MIND Institute environmental epidemiologist Irva Hertz-Picciotto to see if there are any parallels between the effect of early neurosteroids in horses and humans, and if there is a link to children with autism.

“My interest though is the prenatal period and things that happen around the time of delivery and the neonatal factors that could have an impact,” Hertz-Picciotto said. “Some of our other studies do suggest that those are really the critical time periods.”

Currently, there are two projects at the MIND Institute related to autism in children — a case control study called Childhood Autism Risks from Genetics and the Environment (CHARGE) and a cohort study called Markers of Autism Risk in Babies Learning Early Signs (MARBLES).

“[Collected placenta tissue and newborn cord blood] are some of the things we’ll be able to look at and see if neurosteroids or some of the genes that are responsible for regulating the neurosteroids might be out of balance, might be deregulated, or if there might be some [dysfunction] going on,” Hertz-Picciotto said.

Hertz-Picciotto said the big issue is that if neurosteroids really are the problem in children with autism, she would have to further question potential causes.

“Another part of the study would be to really understand what factors might influence those neurosteroids,” Hertz-Picciotto said. “Is there something in the environment that we can modify that might down the road actually reduce risks for children developing autism?”

From a student perspective, Griffin believes research like this needs to be done more often.

“The interaction between animals and humans has so much to offer,” Griffin said. “And there’s an unlimited amount of resources we have here on Earth to actually help us understand disorders. This is something profound, I believe and something that can really help us in so many ways.”