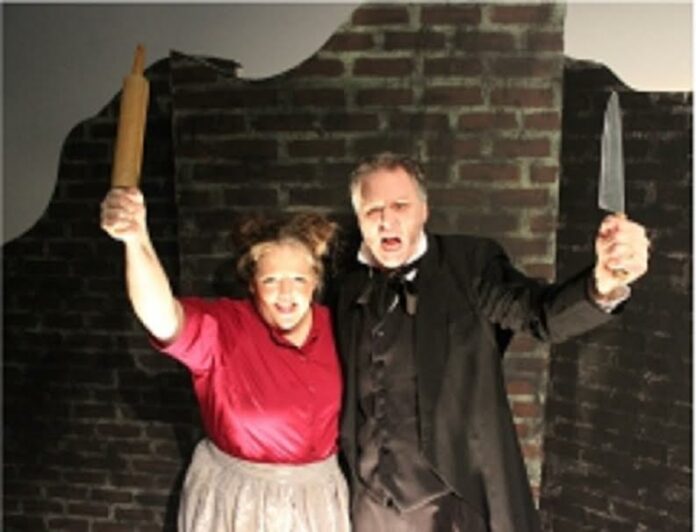 The Davis Musical Theatre Company (DMTC) is set to bring their rendition of composer and playwright Stephen Sondheim’s dark musical, Sweeney Todd, to their main stage, which is located on 607 Pena Drive. The show opens on Feb. 27 and closes on March 22. The show will take place on Fridays and Saturdays at 8:15 p.m. and on Sundays at 2:15 p.m. during the course of these three weeks.

Set in London during the 19th century, the tragic tale of Sweeney Todd follows the life of Benjamin Barker. Formerly a barber, Barker is exiled to Botany Bay by the lecherous Judge Turpin. Judge Turpin wants Lucy, Barker’s wife, for his own selfish endeavours, and thus sends Barker away, claiming the barber’s wife and child. Years later, Barker returns and assumes the role as the infamous Sweeney Todd to exact his revenge on the Judge with shaving shears and meat pies, and in the process becomes addicted to cold-blooded murder.

Steve Isaacson, director and cofounder of DMTC, recommends this production for those who are 11 years or older, as the show contains dark themes and violence.

“It’s not your father’s Oklahoma!,” Isaacson said. “[I recommend Sweeney Todd to those who] don’t mind throats being slit and people eating people.”

Isaacson described the show as “an assault on the audience” and said that he wants the actors and the audience to leave their comfort level for the length of the performance. This is Isaacson’s third time directing Sweeney Todd. He said that this show is one of his all-time favorites because of its sheer dramatic intensity. The DMTC’s production follows the uncensored format of Sondheim’s Original Broadway production, including all original scenes and musical numbers.

When casting roles, Isaacson looks for talent in singing, acting and dancing. While DMTC is a part-time commitment for many of the participating actors, around 30 members have gone on to perform on Broadway.

Eimi Taormina is the actress who plays Sweeney Todd’s wife, Lucy. She has performed with the DMTC for about six years now. Taormina describes her character as a pure-hearted individual who is driven mad by the atrocities she has been forced to experienced.

“[I would describe the show as] more than a story about right or wrong,” Taormina said.

While the throat-slitting and cannibalism is gruesome, Taormina explained that the most terrifying aspect of the show to her is that the audience can relate to these seemingly horrific characters — the reason being that the characters themselves are based off of the real possibility of everyday humans can be driven to madness.

Nathan Lacy is the actor that will play the role of the malevolent Judge Turpin. Lacy said that he does not mind playing the bad guy in the musical because his character offers important insight into the real-life dynamics of good and evil.

“Only by understanding how much evil there is in the world do you really understand how triumphant good can be,” Lacy said.

Tickets prices for Sweeney Todd range from $9 to $18. For more information on the show and/or to purchase tickets, please visit http://www.dmtc.org/.

Meat pies will be served at intermission.