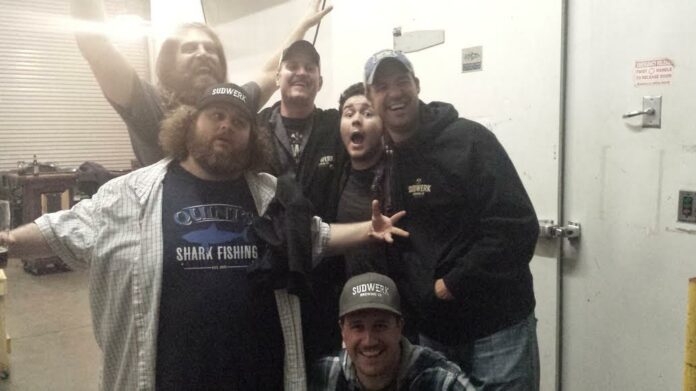 Drink up and laugh out loud at the Hopped Up Comedy 2.0 show, coming to Davis’ Sudwerk Brewery Dock Store on Feb. 28. The seasonal stand-up comedy show, which will feature comedians from television networks such as Comedy Central, Nickelodeon and TBS, is set to coincide with Sacramento Beer Week kicking off the day before.

Returning for its second run after the comedy event’s inaugural show in the fall, Hopped Up Comedy 2.0 will introduce a whole new lineup of starstudded comedians apart from host and producer James Frey.

The show will open with a set from Frey followed by a set from Los Angeles-based comedian Sammy Obeid, who has performed on the likes of “Conan,” “America’s Got Talent” and The Food Network. Taking the stage after Obeid will be Hollywood comic Dan Frederickson followed by the night’s closer and Upright Citizens Brigade veteran Danny Jolles, who has performed for “Funny or Die” and “CollegeHumor.”

Obeid, who specializes in textbook humor consisting of wordplays and school jokes, said his favorite part about performing at breweries is the heightened sense of humor that alcohol creates for an audience, which allows for greater comedic freedom.

“People at breweries are drinking, so they’re a little looser. You can get away with saying more edgy stuff. There [are fewer] morals,” Obeid said. “If I’m performing in a church, that’s a little different. If it’s a church that has a bar – now I would question that establishment.”

Inspired by his series of comedic shows at wineries in Southern California, Frey decided to bring Hopped Up Comedy up North to expand his Northern California fanbase. Having close relationships with managers at Sudwerk, Frey saw beer and comedy as an appropriate fit. He thought the brewery would be a successful venue for its middle ground between being not too rowdy or too conservative.

“For bars it’s usually a more rowdy crowd. They usually like dirtier humor. The brewery is right in the middle,” said Frey. “It’s not a rowdy bar crowd, but it’s not an uptight corporate show either. It’s people who are not afraid of a good beer. It’s a nice middle spot.”

With over 70 guests in attendance at Hopped Up Comedy’s first show in November, Frey decided to bring it back because of the last event’s huge success and Davis’ fun crowd.

“I’d say it’s one of best shows I’ve ever performed at, actually,” Frey said. “Every comic who was on the last show performs seven nights a week sometimes, and they were all blown away by how fun the crowd was.”

With over 40 guests RSVP’d to the event, Sudwerk Dock Store manager Brady Price expects to run Hopped Up Comedy seasonally with four shows a year.

In addition to a night of laughs, Sudwerk will offer special beer deals for the night. Although Sudwerk will allow guests under 21 to attend the show, Price recommends adult accompaniment to anyone under the legal drinking age.

Price encourages community members to attend the comedy show because of the fun atmosphere and limited amount of professional comedic entertainment in Davis.

“So often in a small town like Davis you do the same thing every week. You always go to Froggy’s, you always go to Woodstock’s. These are traditions you do in Davis because it’s such a small town,” Price said. “We’re trying to work on offering different experiences here at the brewery that gets people out and gets them engaged.”

Hopped Up Comedy 2.0 will begin at 7:30 p.m. with doors opening at 5 p.m. The price for the event is $10, which includes the first pint. Tickets can be purchased at the door or by RSVP’ing to brady@sudwerkbrew.com