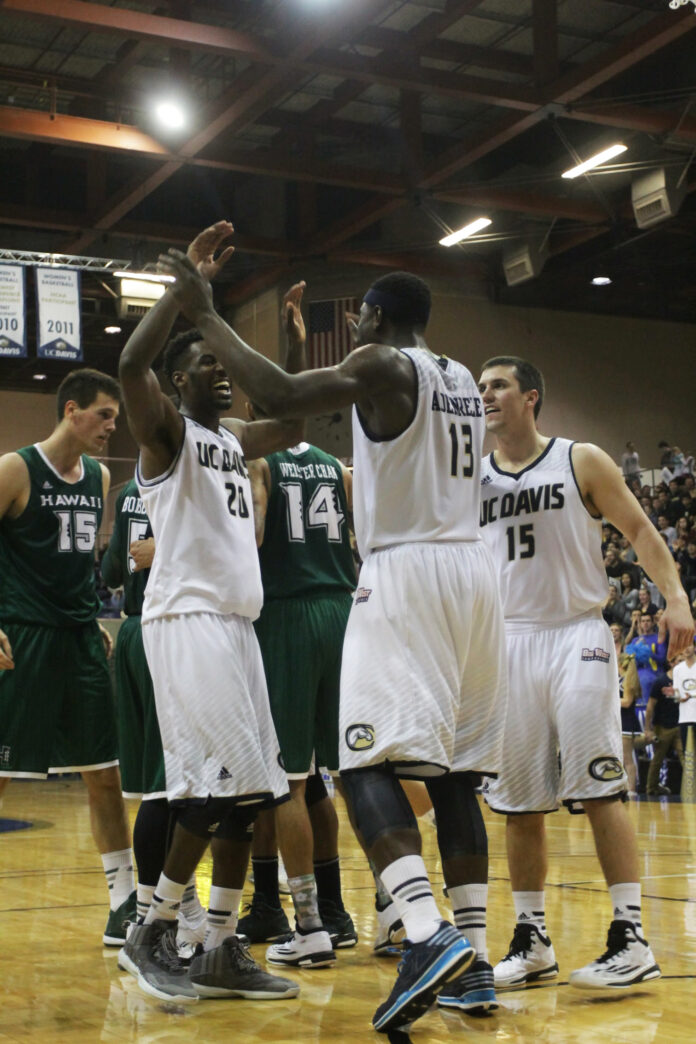 Aggies continue perfection at home with close win against Hawaii

After a successful game against Long Beach State, the Aggies were eager to return to UC Davis and find redemption against the only Big West Conference opponent to give them a loss, Hawaii.  Now 12-0 at home, UC Davis students can rest easy knowing their Pavilion record is safe and sound.

Coming into the crowded Saturday night game against the Hawaii Rainbow Warriors, the Aggies had an outstanding 20-4 record and sat strongly atop the Big West Conference with a 10-1 conference record. Hawaii came in with a decent 18-10 record and were fifth in the Big West with a 6-6 record in conference play.  Despite having a worse record, Hawaii is responsible for the UC Davis’ single loss in the Big West. Tensions were high as the Aggies knew they had a tough game ahead of them.

Senior guard Corey Hawkins was met with an impressive cheer from the crowd as he made his first return to the Pavilion after suffering an injury that had him out for three games.  In spite of the high expectations, Hawaii was successful at shutting him down as he scored a career low six points with only one out of eight field goals made.

The Rainbow Warriors, coming into this game sitting fifth in the Big West, were hoping to climb the conference ladder with another win against UC Davis.  Hawaii is well-known for playing big and strong inside the paint, therefore it was expected that their big men would have a major role in the game.  Standing at 6’11”, Hawaii’s sophomore forward Stefan Jankovic had a target on his back as the Aggies knew shutting him down would be key to the victory.

Within seconds of the first half, senior forward Josh Ritchart was assisted off the court with a knee injury after setting a screen.  The Pavilion crowd showed obvious concern as an integral player limped off the court and his injury status is still not confirmed. With Ritchart gone, many wondered who would step up to contain Jankovic.

It was a roller coaster ride of a first half with both teams fighting for the lead.  Senior guard Tyler Les was truly the story of the night.  Making 5-6 from downtown in the first half, his input would be critical towards the win.  Sparking his team with precision shooting from beyond the arc, Les’s importance cannot be understated.  His confidence from three point land was crucial to spreading the floor and allowing his fellow teammates to successfully slash towards the bucket.  With his help, the Aggies recorded an outstanding 66 percent three-point field goal percentage in the first half.

Despite a big lead early for UC Davis, the Rainbow Warriors stayed strong and eventually took a three point lead into halftime.  It was clear for the Aggies that their big men were an issue that needed to be addressed.

Coming into the second half, the Aggies knew they had to find a solution for Jankovic who scored 12 points in the first half.  Junior forwards Josh Fox and J.T Adenrele were the answers.  Despite giving up height to Jankovic, the duo maintained composure and provided enough irritation to ensure he did not repeat his first half success.

After trading baskets with Hawaii for much of the second half, Les decided his team needed another spark.  Quick firing from the three point line, he gave the Aggies an important momentum boost that lead to them taking the lead.  A rare four point play converted by Les was a turning point near the end of the game.  It was a heart-stopping finish to a well-fought game as a few important defensive stops solidified another win at home for UC Davis.

Scoring a season high 28 points and almost tying the school record for three pointers made in a single game with nine, Les beamed with happiness after the victory.  Almost perfect from the field, there is no doubt his long range presence will be important for the team’s future success.

After the game, the younger Les discussed the source of his success from beyond the three point line. “Being a guy that doesn’t really create for himself a lot, I have to give a lot of credit to my teammates.  They hit me in spots, and I was lucky enough to knock them [his shots] down.  It’s about getting the first good looks.  It gives you your rhythm and confidence and that’s all on my teammates.”

Les also commented on the keys to the win despite Hawkins’s performance and Ritchart’s early absence. “We try to build a culture of the next man up.  Josh goes down unfortunately and they were sending a lot of guys at Corey so guys just have to step up.  We got production from a number of different guys.  That’s the character of our team and the next guy is always ready.”

It was a well-fought win for the Aggies.  It wasn’t perfect, but UC Davis had many players step up and make big plays that greatly contributed to the victory.

When asked about Hawkins’s performance, head coach Jim Les responded with optimism. “Corey was not in a great rhythm, but you have to give credit for that to Hawaii.  They were running a couple defenders at him to make it tough on him.  The mentality this team has developed is that we can still win if some of our guys aren’t having their best nights.  We’re expecting guys to be responsible for production and coming in knowing they have to carry their own weight.”

Les continued, discussing the importance of the win. “This group has done a really good job with turning the page.  We will enjoy the win, but they know there is a tough road trip coming up. We are just going to continue one game at a time.  Work hard, trying to get better and hopefully close this thing out.”

After the win, UC Davis maintains perfection at home with a 12-0 record.  The Aggies will take a tough road trip to UC Santa Barbara and Cal Poly before returning to the Pavilion for a two-game home stand against UC Riverside and UC Irvine.