Problems in the Pavilion 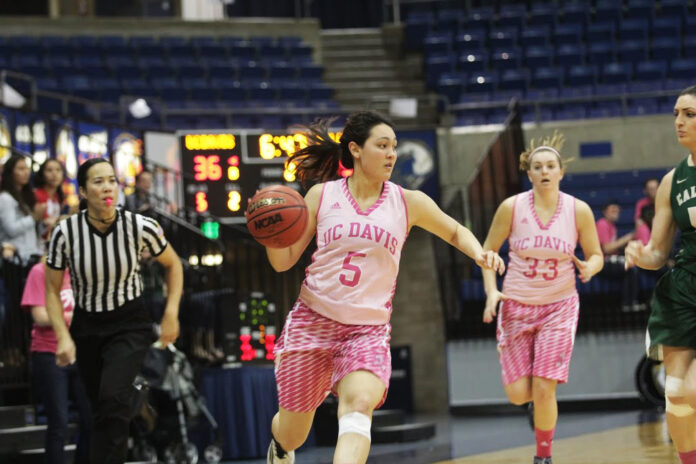 The playoff chase is on for the UC Davis women’s basketball team.  Coming into Thursday night’s game, the Aggies held second place with an 8-4 Big West Conference record and a 13-11 overall record.  Being an inter-conference game against the Cal Poly Mustangs who sit 2 positions under the Aggies with an 8-5 record, this game was crucial to finishing the season on top.

It was a disastrous game from the start as the Aggies seemed confused on both offense and defense.  Despite having home-court advantage, UC Davis was not able to use the momentum from their fans.

The biggest statistic that stood out was the rebounds.  The Aggies got demolished on the boards as they were only able to obtain 15 rebounds compared to Cal Poly’s 26.  Nine offensive rebounds gave the Mustangs several second-chance points which clearly depleted UC Davis’ morale.  Only one player on Cal Poly was unable to grab at least one rebound compared to UC Davis where only five of the ten players were able to record a board.

UC Davis had poor shooting in the first half as well, completing only 9-27 field goal baskets. Nothing was going for them and thus the first half ended with them trailing the Mustangs 22-29.

With high hopes, the Aggies returned to the court after the half with cheers and support from the crowd.  Unfortunately, the first half became the lesser of two evils as the struggles intensified in the second.  UC Davis shot 26 percent from the field and were still unable to take control of the paint.  Cal Poly increased their shooting percentage to 51 percent and were bullying the Aggies in every aspect of the game.

The Aggies finished the game with only 27 total rebounds compared to Cal Poly’s 50.  Head coach Jennifer Gross was extremely disappointed with this statistic after the game.

“We can be a great rebounding team if we remember our habits and that’s going to make us a better team down the stretch,” said Gross. “It’s about effort, it’s about focus, and we have players that can do it, we just have to get it done.”

It was a game to forget and a true heartbreaker as this 52-68 loss diminishes the playoff hopes for UC Davis.

“I felt we never got into that groove. Every stat category was a little uncharacteristic for us.  It wasn’t our night,” said Gross. “Give Cal Poly credit. I feel they played a great game and we just never adjusted.”

Though Gross was optimistic, it was not enough as the Aggies’ struggles continued against their next inter-conference opponent, UC Santa Barbara.  As of now, UC Davis has lost three in a row which places them in fifth place in the Big West.  They have dug themselves into a hole and it’s going to take some tough victories against their last two opponents as well as some losses from other conference teams to even have a chance at finishing in the top three of the conference.

The Aggies will hit the road and finish the season against UC Riverside and UC Irvine on March 5 and 7 respectively.