“To Light a Candle” film sets a spark 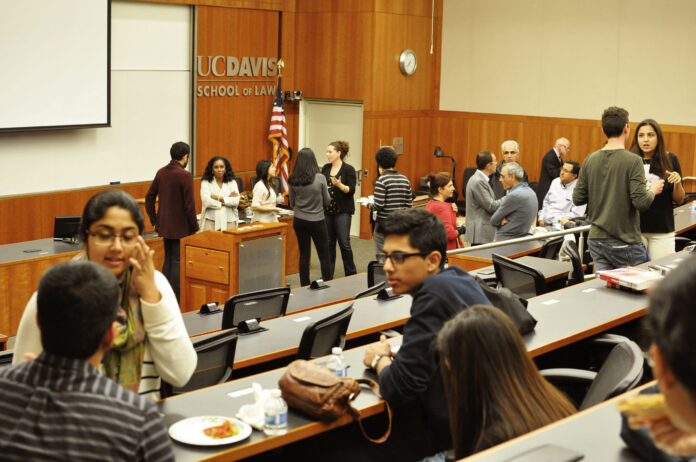 Murmuring amongst themselves, individuals seated in a lecture hall in the UC Davis School of Law begin to hush as the film To Light a Candle begins. Some eyes widen slightly in preparation, and others hold their breath. The film, made by journalist Maziar Bahari, addresses the persecution of those belonging to the Baha’i Faith.

The Baha’i Faith was developed in 19th century Persia, and has since grown to encompass over five million followers and is practiced in over 200 countries. Operating on the ideals of peace, equality and nonviolence, the faith remains to be seen as a dangerous political organization — rather than a minority religion — in the eyes of the Iranian government. According to the film, Baha’i children and young adults living in Muslim Republic of Iran today continue to be treated as second-class citizens and are denied access to traditional education.

As part of the larger “Education is Not a Crime” campaign, which launched on Feb. 27, the film is being screened in multiple college campuses and Baha’i centers across the country. UC Davis was one of the first universities to show it, on Feb. 26.

“The campaign was brought to my attention by the National Spiritual Assembly of [the Baha’is of the United States of] America, which takes care of the administrative aspects of the Baha’i faith in the United States,” UC Davis alumna Negin Sobhani said. “They want us to start showing this movie in universities in any capacity that we can.”

Sobhani has returned to her alma mater to work with members of the newly revived Baha’i Club, which was active during her undergraduate years but had since dissolved. The club was restarted on-campus this quarter.

Club president and third-year biological sciences major Taraneh Allahdadi moved to the United States 11 years ago when her brother, then a high school graduate, was denied the right to an Iranian college education in medicine. For Allahdadi, the campaign is close to her heart because of her personal connection to its cause.

“I want people to know how lucky they are to have the opportunity to study in the United States or anywhere else in the world where there is freedom,” Allahdadi said. “We take advantage of this freedom and we are able to study without any limitations. Knowledge is so important but only when it is taken away from you do you realize how precious it is. I want people to be able to sympathize with those who aren’t able to have that.”

Raised in Iran until her pre-teenage years, Sobhani also moved to the United States with her family because of difficulties obtaining an education without harassment. Sobhani also recalls being shunned by her classmates and asked to leave classrooms by her teachers once they realized she was of the Baha’i Faith.

“I remember a time from when I was only six or seven.  My mom was holding my folders under her arm and walking me out of the school. I remember thinking, ‘Where are we going? It’s the middle of class.’ I didn’t understand what was happening at that young age. I kept thinking, ‘Why am I different? What have I done to be treated like this?’ There was so much confusion and chaos,” Sobhani said in a panel following the screening.

Sobhani was joined on the panel by three other guests — UC Davis alum Hossein Gouran, former chairperson of the National Spiritual Assembly of the Bahai’s of America Bill Davis and Dr. Mona Mahmoudi. Mahmoudi, who is featured in the documentary itself, reveals in the film that her parents were taken away from her during the Iranian Revolution of 1979. Especially for older members of the audience, her stories brought back painful memories from the past.

“I cried. This was so emotional for me,” said Sobhani’s mother, Nahid. “Even if I saw this movie ten more times I would cry. It brings me back to when I lived in Iran and when my brother was imprisoned because he was a Baha’i. I can never forget that terrible time, but this film refreshed my memories.”

For members of younger generations, however, the film could not refresh memories. Instead, UC Davis undergraduates, recent graduates and other young guests were informed of issues in modern-day Iran that they were not thoroughly educated about. Saman Ferdosian, a Baha’i and American River College student in Sacramento, attended the event after being invited by a friend. Ferdosian felt that he knew little about the situation in Iran before viewing the film, and scarcely enough to make a difference. He believes that the film presented a clearer picture about the situation his people face overseas.

Though UC Davis biochemistry and molecular biology alumnus Hasan Entwistle does not identify as a Baha’i, he describes himself as having grown up in a Baha’i community and surrounded by Baha’i individuals. He works closely with Baha’i youth groups on community service projects and believes that he is invested in the movement for their education and success.

“This was such a powerful movie and I hope the Baha’i Club can find ways to hold more showings of it,” Entwistle said. “I think awareness of any sort of issue like this is important. It is through these movements that we create change, and I think this event was successful in making people aware of this movement.”