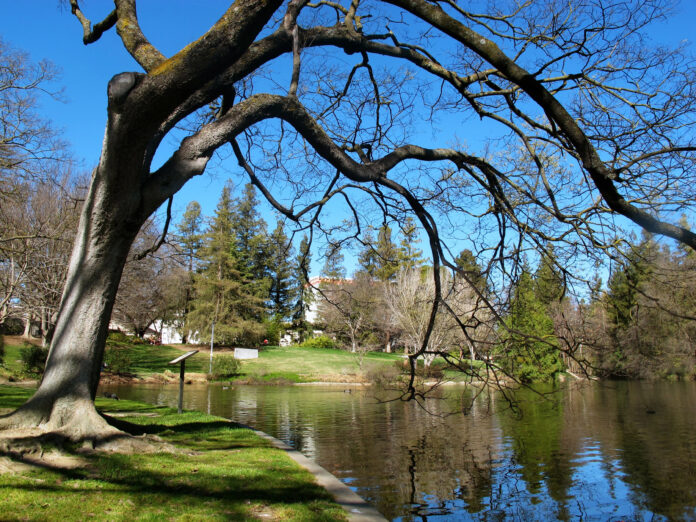 Before the Putah Creek Council (PCC) started its work, Putah Creek’s banks were littered with mattresses, shopping carts and abandoned cars along with beer bottles, spray-paint cans and cigarette butts. In the summer of 1989, California experienced a lengthy drought and as a result, water dried up and fish died.

Founded in 1988 by UC Davis graduates, the PCC is dedicated to bringing people together to protect and restore the creek’s riparian habitat and water level.

“The restoration events that we have on Putah Creek itself are to plant native vegetation along the areas of the creek where we’ve been partnering with the Lower Putah Creek Coordinating Committee and the creek’s stream keeper to do realignment projects,” said the PCC’s Executive Director Carrie Shaw.

Shaw added that the lower 23 miles of the creek will be receiving a number of restorations made over the year, including the replacing of exotic vegetation and  with native trees and shrubs.

In order to bring water back to the creek, the PCC had to go up against the Solano County Water Agency, Solano Irrigation District and other entities in a lawsuit for environmental flows. The success of the lawsuit resulted in an accord and allowed the PCC to continue its restoration efforts.

Third-year environmental policy analysis and planning major Naftali Moed is a student board member for the PCC and has been involved with the organization since his first year. He says that the purpose of planting is not only to help with the ecological restoration of Putah Creek but also a way of engaging the community.

“Healthy creeks build healthy communities. It’s sort of a two-way thing,” Moed said. “The only reason there’s water in the creek today and there’s always water year-round is because the community came together and said this is something we care about.”

In high school, Moed had the opportunity to do many habitat restoration projects and wanted to continue this work at UC Davis. Over the last two years, Moed has helped out with some of the re-vegetation in the Putah Creek Park in Winters and has also volunteered in erosion control projects at Pleasants Creek, a tributary to Putah Creek.

“It’s important in continuing [restoration],” Moed said. “There’s still lots of work that can be done and it’s really important from the council’s perspective, from the campus’ perspective, and I think just in general for people to be engaged in what’s going on out there.”

UC Davis alumnus and the PCC Community Stewardship Program Manager, Bobby Gonzalez, is in charge of co-planning restoration projects with the PCC’s partners like the Solano and YOLO conservation districts and doing a lot of community outreach to recruit volunteers. Volunteers are comprised of a mix of community members from YOLO and Solano County and UC Davis students. The PCC participates in the Weekend of Service every quarter; many service groups such as sororities and fraternities, boy scouts, 4-H groups and church groups volunteer.

“Putah Creek Council has always had a close relationship with the university,” Shaw said. “Our founders were graduate students of the university and the university was a partner in our lawsuit. Many UC Davis faculty have been advisors to our organization so we have a really close tie.”

Most of the PCC’s advertising is done through word-of-mouth.

“If I bump into people on the street and they see that I’m wearing a Putah Creek Council t-shirt they start asking questions,” Gonzalez said. “We exchange information and I email them about our upcoming events and they come out. And sometimes they absolutely love [it] and keep coming back.”

In 2013, there were over 100 community volunteer events that included a native plant nursery, restoration planning and the annual Putah Creek fall cleanup. In total, almost 1000 Stewardship Team and community volunteers were involved, contributing to over 2,350 hours of volunteerism valued at nearly $60,000.

In addition to community stewardship, the PCC also provides community and classroom education. CreekSpeak! is an annual six-month series of public talks that cover the history, culture and nature of the area. There are also classroom projects such as Adopt a Flat, Salmon in the Classroom, Putah Creek Club and creek cleanups for students. In 2013, there were approximately 850 elementary and secondary students and 140 community members reached.

One long-term project includes the realignment of Putah Creek. According to Shaw, the bottom of the creek was dug out by bulldozers for gravel and other uses which killed fish and damaged the habitat of many animals when UC Davis was being constructed.

“The big holes in the creek are being realigned and being filled in,” Shaw said. “The stream channel is being morphologically realigned in the floodplain so the creek gets shallower, runs faster and is cooler and has a lot more aeration for the salmon and trout. It’s providing a much more natural habitat and better habitat for the group of fish that we’d like to attract to that part of the creek.”

Gonzalez used to volunteer every week before he started working for the PCC in late 2014, and has been involved in several projects since. One in particular is the native plant restoration and erosion control in Pleasants Creek. Though the Monticello Dam reduced flood risk along Putah Creek and also solved chronic water shortages in Solano County, it has also brought some unintended consequences.

“That creek has experienced significant erosion since the construction of the upstream Monticello Dam,” Gonzalez said. “The river has basically carved into the landscape quite a bit and there are some really steep eroding banks that need to be stabilized.”

Moed adds that joining the PCC is even a good option for people who may not be specifically interested in restoration efforts.

“For me, it’s just really nice to get outside and do something different,” he said. “I spend my whole week in a classroom or in meetings on campus and it’s so nice to be able to go out on a Saturday or Sunday to somewhere completely different and just be outside in nature.”