All about that sass 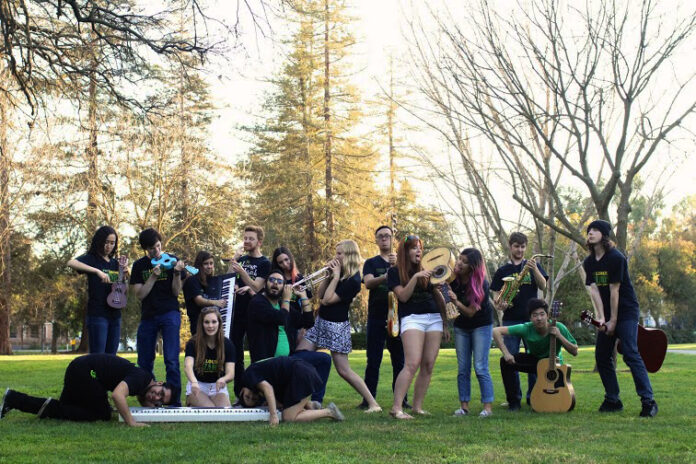 It’s week 10 of winter quarter. You’ve sweated over midterms, spent countless hours cramming, made way too many Dutch Brothers runs and you’ve still got finals to get through. But have no fear — the UC Davis Lounge Lizards are here to brighten your week with their energetic brand of a cappella. This Friday, the Lounge Lizards will be celebrating their 20th anniversary since their founding in 1995 with their No Instruments Attached: 20th Anniversary Edition concert. The Lounge Lizards are known for their lively performances and fun atmosphere, making this concert the perfect break from all that finals studying.

“We’re known as the silly group in the a cappella community,” Meghan Murphy, a second-year psychology major and the Lizards’ public relations chair, said. “We’re chill, just love to hang out with everyone [and] dorky.”

Jordon Wade, a graduate student in soil sciences and music director of the Lounge Lizards, agrees that the Lizards always have a blast performing in front of audiences.

“We’re generally laid back and have a lot of fun, but we also know when it’s time to get down to business,” Wade said.

President of the Lounge Lizards, fourth-year animal science major Jessie Herrera, enjoys the chance to get to meet and listen to other a cappella groups.

“Meeting new people who do the same thing as you is really fun,” Herrera said. “You get to find things in common and see the [artistic] parallels [between] each other’s groups.”

Wade also enjoys watching other groups perform because each campus has a distinct a cappella culture and community.

“At Davis, the vibe is friendly and really supportive. We’re fairly refined and uniform in what we look like, but for Acquire [they like to play around with their look]: one time they came out all wearing pajamas [for their performance],” Wade said. “They just have a completely different way of going about their shows and we love bringing that in.”

The Lounge Lizards have goofy events planned themselves. They will be having a social media contest in which fans create their own lizard and dinosaur meme and post their answers on Facebook or Twitter with the hashtag #NIA2k15. Winners will be revealed during the concert and will receive a Lounge Lizards t-shirt as well as their very own personal serenade.

Along with their meme contest, the Lounge Lizards will also be having a competition during their concert between their two co-hosting teams: Team Riguel, composed of members Ryan Chen and Miguel Guerrero, and Team Serena, made of members Sarah Poplack and Kellina Doerr. Wade says they will encourage live tweeting during the show so audiences can vote on their favorite team.

“It’s OK to be on your phone and tweeting. We want to see the tweets and what [the audience] thought of the song,” Wade said. “There’s 500 [in the audience] and 17 of us and we want to bring them down to the stage with us because this show is for them,” he said.

Be it Team Riguel or Team Serena that comes out victorious, No Instruments Attached: 20th Anniversary Edition promises to be a fun night of jazz, pop, rock and everything in between.

The show will start at 8 p.m. this Fri., March 13, in Science Lecture Hall Doors open at 7:30 p.m. Tickets are $5 presale online or in front of the Memorial Union at the Lounge Lizards table this Monday thru Friday, and will be $7 at the door on the night of the event. Visit the Facebook event page to learn more.