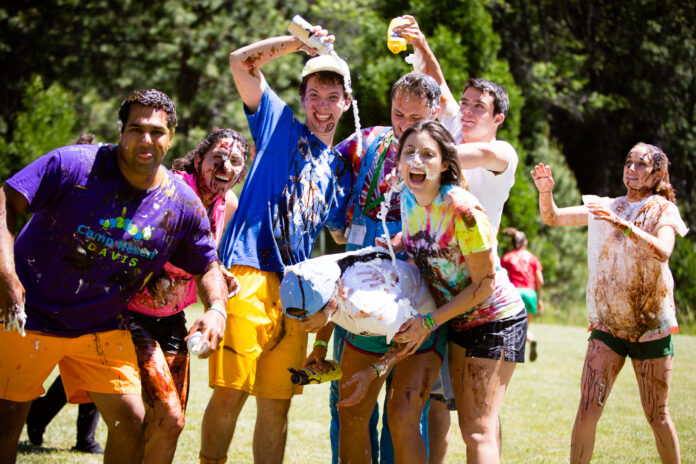 Student-run summer camp offers support, friendship to children who need it most

Over 100 kids between the ages six to 16 participate in a week-long camp every summer provided by Camp Kesem UC Davis.

Camp “Kesem” – the Hebrew word for “magic” – was founded in 2000 at Stanford University as a project of the university’s Hillel at Stanford, a non-profit organization serving Jewish group of students at the university. The camp’s mission has two parts: to provide support for children affected by a parent’s cancer, and to empower college students by focusing their passions towards making a difference.

“This is the one place where they feel like they have a community of people who are all going through the same thing,” said fourth-year art history major and Camp Kesem UC Davis director Anya Simmons. “With the counselors, not only do they get be part of this camp for one week out of the year, but they also develop these leadership skills all year, and they’re fundraising, planning and putting so much time into this every day. That’s something I think a lot of people don’t know about. It’s not just the camp – there’s also a whole community behind that.”

As directors, Simmons and fourth-year neurobiology, physiology and behavior major Alyssa Kramer work with other leaders of the coordinating team, including volunteer recruitment and community outreach. In addition, there is an advisory board consisting of ten members whose jobs are to guide student leaders in various areas such as camp programming and fundraising.

“What we try to do is support them with what they’re doing,” said advisory board member Peggy Watterson. “We’re kind of the hands out in the community beyond UC Davis and try to make their actions positive. That’s how I see my role – it’s to make sure that when they need help, we’re there to be the community link on it.”

Camp activities include arts and crafts, swimming, hiking and horseback riding. Each night, campers participate in an activity called “cabin chat” in which they share stories and express their feelings with those who are in similar situations. At the end of the week, there is an empowerment ceremony that the entire camp attends in which all attendees share their own personal stories and experiences.

“It’s that night at the empowerment ceremony that we really reflect on how cancer has affected us or how Camp Kesem has helped us,” said fourth-year design major and Make the Magic Coordinator Brittney McPherson. “It is my favorite thing by far. The kids really show their maturity but they also show that they’re just kids. It’s a really unifying experience and you can totally tell how everyone is there just to support each other.”

After losing her father during her sophomore year after a 15-year battle with cancer, McPherson was looking for something to both offer support and keep her productive – that’s when she came across an online post about Camp Kesem.

“When I joined, I wanted to not only give myself some support but also be surrounded by kids who completely understand. I never had that support when I was a kid, so to be around kids who completely understand what I went through, that’s why I initially joined,” McPherson said. “But it’s changed over the past now. I do it because these kids see cancer as a completely horrible thing, and it is, but there’s a silver lining in cancer and that is Camp Kesem. I do it now to show kids that there’s a light in cancer, and although cancer sucks and is the most horrible thing on the planet, there’s something good that comes from it.”

McPherson is now going into her third year at Camp Kesem, and after overcoming her initial anxious feelings, she now can say that the camp is a “great” experience which opened up her eyes to how often these kids are overlooked.

“When you think of cancer patients, you usually think of the person who’s going through the treatment, the person’s who’s being affected,” McPherson said. “I never really thought about how overlooked these kids are. There’s three million kids in the United States that have a parent who’s been affected by cancer and we’re only helping four thousand of them.”

“A parent will just submit a form telling us what they need,” Simmons said. “We could be cheerleaders at a soccer game or whatever they need. It’s really just extra support if they feel like they’re having kind of a hard time and they need us there. We’ll do anything pretty much.”

In-A-Pinch is not viewed as a babysitting program since the counselors are regarded as the childrens’ friends, rather than superiors.

Since it is completely free of charge, Camp Kesem UC Davis must raise funds in order to keep the camp running. The camp holds many fundraising events throughout the year in order to cover the approximated $500 to send a camper to camp.

The biggest fundraising event is “Make the Magic,” a live and silent auction in Sacramento that usually hosts approximately 200 guests. Last year, fundraisers were able to raise $30,000 at the auction, and this year they hope to raise $50,000.

“Last year was an event that we almost set record in the nation,” McPherson said.  “It’s the second closest thing to camp that I can say. Make the Magic is kind of just like a little taste of what Camp Kesem is.”

This year’s camp will be held for two weeks, which is one week longer than usual. With this additional week of camp comes additional funds needed – a grand total of $90,000 is being raised, which is $15,000 more than they have needed for the past, one-week long camps.

Simmons said that gaining recognition is something they will aim for as well this year since she believes the organization is still relatively unknown among community members.

McPherson encourages people to get involved if they are interested in the rewarding experience that Camp Kesem offers.

“You gain not only connections with people but you gain this satisfaction of helping these kids,” McPherson said.

From an advisory board member’s perspective, Watterson said it’s important for the community to be aware of what Camp Kesem is doing.

“I’m kind of amazed there’s not more staff, faculty interest or involvement,” Watterson said. “That’s why I think it’s really important their work gets seen. It’s an amazing undertaking for them. I want the community to understand that we have this incredible thing happening.”